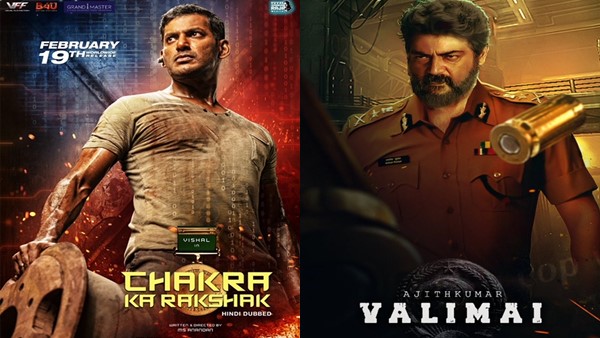 Vishal-starrer Chakra has been titled Chakra Ka Rakshak in Hindi. The makers of Chakra have decided to release the film in Hindi along with Telugu (dubbed in both languages). The film originally in Tamil is a thriller based on cyber-crimes and revolves around a mass robbery that happens on Independence Day. Vishal plays an Army officer in the film. Directed by MS Anandan, Chakra Ka Rakshak also stars Shraddha Srinath and Regina Cassandra in pivotal roles. Produced by Vishal under his banner Vishal Film Factory, the film also stars Srushti Dange, Manobala and Robo Shankar in supporting roles. It will release on February 19, 2021. Chakra Ka Rakshak is distributed by B4U and Grandmaster across India. The film has music by Yuvan Shankar Raja and cinematography by Balasubramaniem.

Allu Arjun-starrer Pushpa, directed by Sukumar, is one of the much-awaited films of 2021. Also starring Rashmika Mandanna as the female lead, the film marks the first pan-India release of the Stylish Star’s career. Pushpa will be releasing in Telugu, Tamil, Malayalam, Kannada and Hindi on August 13, 2021. Produced by Naveen Yerneni and Y Ravi Shankar of Mythri Movie Makers in association with Muttamsetty Media, the Allu Arjun-starrer also features Prakash Raj, Jagapathi Babu, Dhananjay and others in key roles. Music for Pushpa is composed by Devi Sri Prasad.

Prabhas and Pooja Hegde-starrer Radhe Shyam is yet another pan-India release in 2021. The romantic-drama has already created a buzz amongst the masses, and fans are eager to see the Rebel Star’s romantic avatar on the big screen. Directed by Radha Krishna Kumar, Radhe Shyam is scheduled to be released in Telugu, Tamil, Malayalam, Kannada and Hindi. It also stars Bhagyashree, Kunaal Roy Kapur, Sachin Khedekar, Murali Sharma and others in pivotal roles.

Tamil film Valimai starring Ajith, Huma Qureshi and Kartikeya Gummakonda is one of the most anticipated films of 2021. Directed by H Vinoth, Thala Ajith is playing the role of a cop, and his salt-pepper look caught everyone’s attention. Produced by Boney Kapoor under his Bayview Projects LLP banner, Valimai also stars Pavel Navageethan, Yogi Babu, Achyuth Kumar, Sumithra and Pugazh in key roles. The makers have not yet announced its release date, and it will reportedly be releasing in Tamil, Telugu, Malayalam, Kannada and Hindi.

Well, while these movies are yet to hit the screens, the next two films have already been released and did well at the box office.

Thalapathy Vijay-starrer Master was released in Hindi on January 14, 2021, with the title Vijay The Master. The Tamil version was released on January 13, 2021. Because of its solid buzz as well as its unique content, the film turned out to be a box office success and appealed to Hindi speaking audiences. Directed by Lokesh Kanagaraj, Master also stars Vijay Sethupathi, Malavika Mohanan, Andrea Jeremiah and Arjun Das in pivotal roles.

Ravi Teja-starrer Krack was released on January 9, 2021, all across the country with the same name. Its Hindi dubbed version performed well at the box office. The cop-drama also stars Shruti Haasan as the female lead. Directed by Gopichand Malineni, Krack turned out to be a booster for Ravi Teja as his previous films had failed miserably at the box office.

When Kareena Kapoor Khan Said That Abhishek Bachchan Is Going To Be Better Than His Father Amitabh Bachchan!

Gangubai Kathiawadi: Alia Bhatt To Lend Her Voice For A Song, Sanjay Leela Bhansali To Compose It