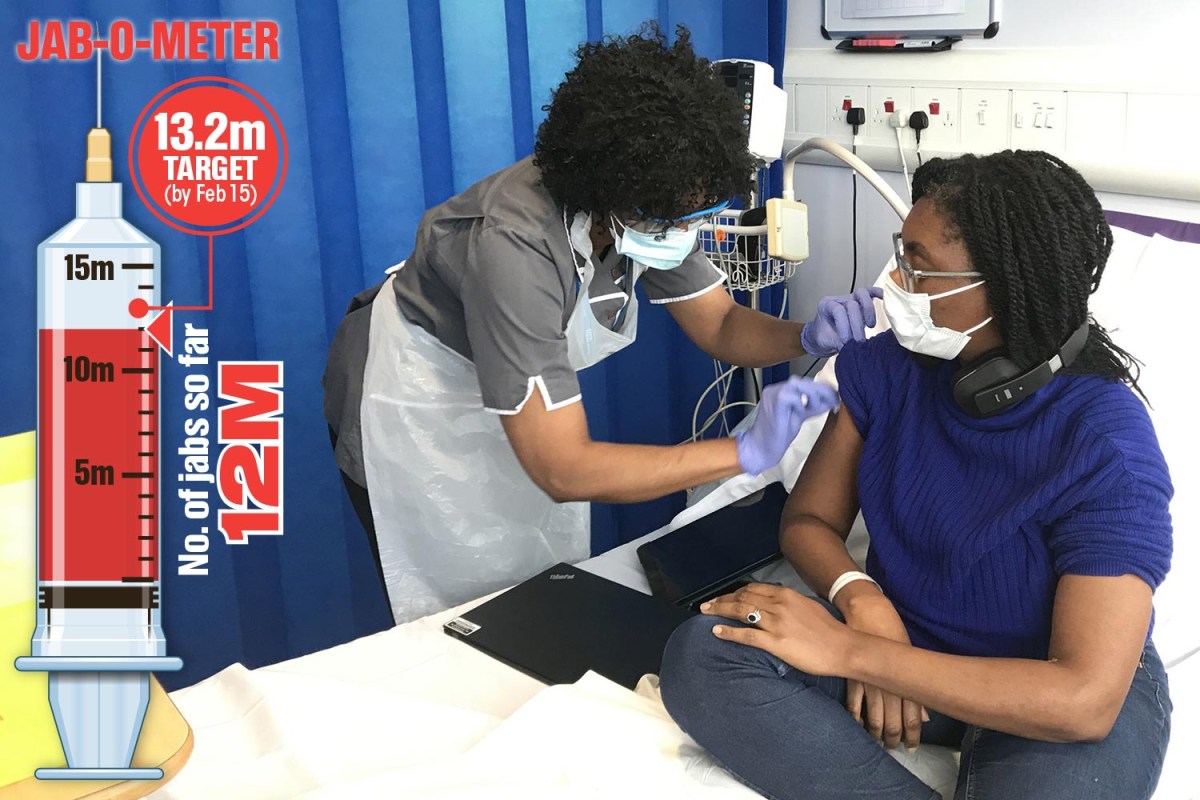 BRITAIN is on track to have given 15million Covid jabs by Valentine’s Day as the rollout goes from strength to strength.

Nearly 1,000 vaccinations are now being done every minute, the Government said.

? Read our coronavirus live blog for the latest news & updates

Vaccines Minister Nadhim Zahawi revealed the landmark was in sight as more than 12million Brits have had their first doses.

A total of 2,700 sites across the country are now rolling them out as quickly as they can — including 200 pharmacies, 250 hospital hubs, thousands of GPs, and 100 mass vaccination centres.

Overseas experts said UK ministers’ strategy for dishing out as many first doses as possible was the right one.

And they hailed new evidence people waiting longer for a second dose may be even more protected.

It came as Oxford experts confirmed their jabs did work on the worrying new South African variants — and they are now working on a vaccine specifically tailored to the mutation.

Scientists have discovered the original protects against severe disease, hospital admissions and deaths, but it may still cause some mild illness.

All of the currently approved vaccines have some effect on both the UK and South African strains, it has been found.

Professor Sarah Gilbert of Oxford University explained: “Even if we’re having mild and asymptomatic infections, to prevent people from going into hospital with Covid would have a major effect.

“This year we expect to show that the new version of the vaccine will generate antibodies that will recognise the new variant.

“And then it will be very much like working on flu vaccines.”

Mr Zahawi warned the country may need a rolling programme with annual jabs or a booster in the autumn to protect against the mutant strains.

Ministers are expected to announce this week they are set to smash the target to vaccinate the 13.2million most vulnerable people — including all NHS staff and the over-70s.

They will then move on to the next stage as officials plan the future priority groups.

Meanwhile, 15,845 new cases of the virus were reported — with deaths at their lowest point since before the third lockdown came into effect, at 373 in 24 hours.

The news came as Mr Zahawi revealed Brits would be able to get a vaccine certificate through their GP if another country demanded proof before they can fly abroad.

But he denied reports that the UK would use them here to release people out of lockdown sooner.

Most GPs charge around £15 for other vaccine certificates such as yellow fever — but in some ­places they can set patients back £30 or more.

Mr Zahawi told Times Radio: “If it’s a requirement from another country that you’re visiting, which obviously some countries have done in the past with other viruses, then you can ask your GP which holds your record for proof that you’ve been vaccinated.

“We are not looking to introduce a UK-wide vaccine passport because we don’t yet know the impact of the vaccine on transmission.

“It would be discriminatory because we don’t mandate vaccines. It’s not how we do things.”

Scientists hailed Britain’s “brave” decision to give as many first doses out as possible — saying it was proven to be effective despite scepticism from parts of the world.

Professor Gilbert praised the effectiveness of the jabs when they were done 12 weeks apart.

She told the BBC’s Andrew Marr Show: “There’s no gap in immunity between giving the first dose and giving the second dose.”

And she added and that those who have it after that time “end up with higher antibody levels and higher efficacy against the virus than people who have it with a short interval”.

Dr David Nabarro of the World Health Organization said British scientists had been vindicated over slowing down the rollout of the second jab to prioritise first doses.

The Government’s hotel quarantine plans are set to come in this week — with travellers from at least 30 countries having to pay to isolate for ten days.

But a fresh report revealed the new South African variant has been discovered in at least 35 other countries not on the list, including France, Greece, Japan and the US.

Boy, 17, stabbed to death on street as cops arrest woman, 35, over his murder

Congress for getting more seats in Bengal alliance