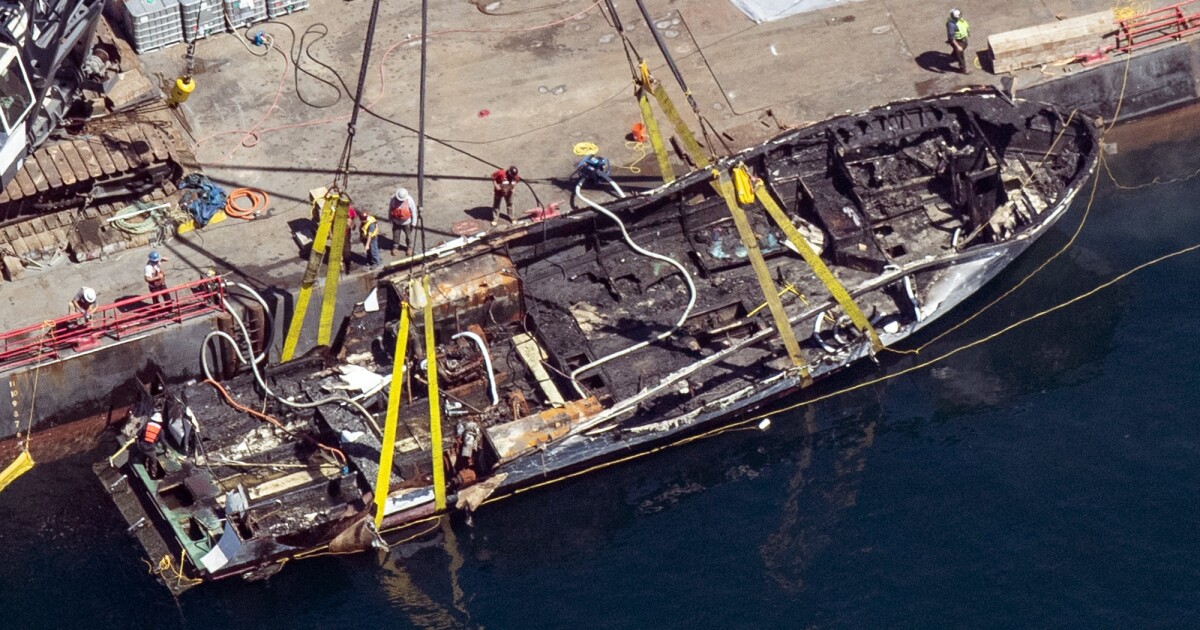 The captain of the Conception, the dive boat on which 34 people died during a fire in 2019, pleaded not guilty Tuesday to seaman’s manslaughter charges.

Jerry Boylan, 67, entered the plea during a brief court appearance before a federal magistrate judge in downtown Los Angeles as relatives of those who died watched the proceeding over video.

Boylan, who has been allowed to remain free since a 34-count indictment against him was revealed in November, was ordered by the magistrate judge to post a $250,000 bond Tuesday as part of the terms of his release. According to the indictment, Boylan “was responsible for the safety and security of the vessel, its crew, and its passengers.”

All 33 divers on board died after becoming trapped in the boat’s bunk room when the nighttime fire broke out during a trip to the Channel Islands. A crew member also died.

“My stomach turned,” said Kathleen McIlvain, whose son Charles, 44, died in the deadly blaze, of seeing Boylan on Tuesday. “He has not spent one night in jail. … We are trapped in this nightmare every day.”

Federal prosecutors allege the failure of Boylan, a resident of Santa Barbara, to follow safety rules led to the tragedy on Sept. 2, 2019.

The summary of alleged failures mirrors findings by the National Transportation Safety Board, which concluded that not having a roving watchperson, among other lapses, prevented crew members from detecting the fire in time to save the passengers.

At a hearing this fall NTSB investigators revealed that many of those trapped below deck were awake — some with their shoes on — as the fire engulfed the vessel about 3 a.m., but could not escape the bunk room and died of smoke inhalation.

The NTSB also faulted the company that owns and operates the boat, Truth Aquatics, for failing to adhere to various safety practices. Glen Fritzler, the company’s owner, and his attorneys have denied any wrongdoing.

The charge of seaman’s manslaughter has been used in other recent high profile cases of negligence and misconduct at sea. In 2013, the oil company BP pleaded guilty to 11 counts of seaman’s manslaughter in connection with the explosion on the Deepwater Horizon oil rig in the Gulf of Mexico. Federal prosecutors in Missouri charged a duck boat captain and two others with the crime after 17 people died from a boat capsizing in 2018.

In a statement he gave to the U.S. Coast Guard, Boylan said that by the time crew members woke him, the fire had already reached the 75-foot boat’s upper deck. He managed to issue a distress call shortly after 3 a.m., gasping into the radio, “I can’t breathe.”

Boylan jumped into the water to escape the flames, he said. A member of his crew told federal officials that when Boylan came to the surface of the water, he said, “‘Oh my God, all those people,’” according to NTSB records.

The NTSB determined the fire began in the back of a middle deck salon, where several lithium-ion batteries were being charged. The agency could not say for certain whether the batteries had caused the fire, or if it was the ship’s electrical system or something else.

UK, 4 Other Regulators To Fast-Track COVID-19 Vaccines Modified For Mutations

Robson Green re-traces his steps as he takes us on his...