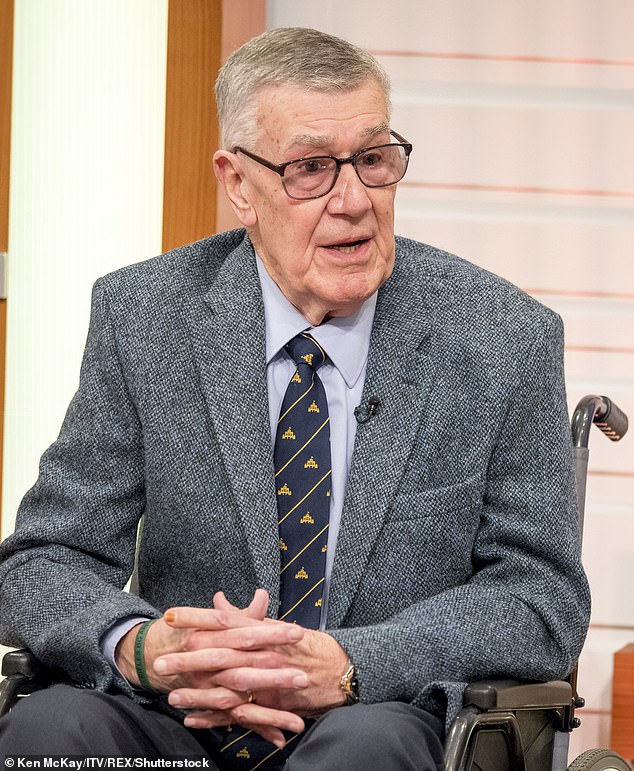 The Metropolitan Police’s head negotiator who helped the SAS save the lives of 19 hostages during the Iranian Embassy siege of 1980 has died.

Chief Superintendent Max Vernon, who is believed to have been 85, was part of a six-man team charged with negotiating with six armed terrorists who besieged the diplomatic building in South Kensington, West London and took 26 people hostage.

The gunmen, all Arab separatists demanding autonomy for Iran-held Khuzestan following a regime crackdown in 1979, demanded the release of 91 prisoners and their own safety in return for handing over the hostages.

Prime Minister Margaret Thatcher refused to guarantee the terrorists safe passage out of Britain – and between April 30 and May 5, 1980, the world watched and waited as Mr Vernon began his life-saving negotiations.

His smooth-talking, brought to the big screen by actor Mark Strong in the 2017 film 6 Days, bought the SAS B Squadron time they needed to storm the Embassy.

During the 11-minute raid the SAS rescued all but one of the remaining hostages and killed five of the six hostage-takers. An inquest cleared the SAS of any wrongdoing while sole remaining gunman served 27 years in British prisons.

Good Morning Britain host Piers Morgan today led tributes to Mr Vernon, whose cause of death has not yet been revealed. He tweeted: ‘RIP Max Vernon, head police negotiator during the 1980 Iranian Embassy siege. 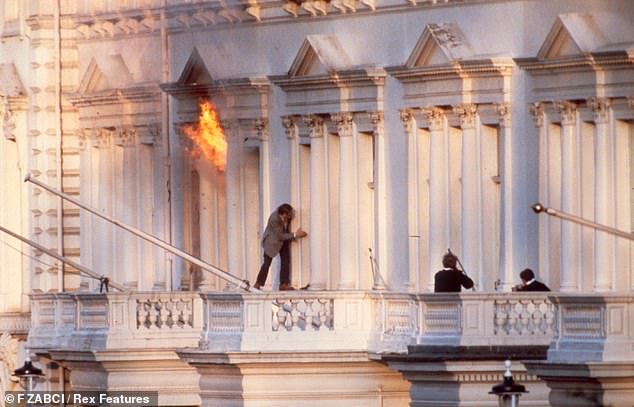 Armed police outside the Iranian Embassy in London in 1980

‘Rusty Firmin, one of the SAS leaders that day, said: ‘Max was the true hero, he bought us enough time to plan & prepare for the mission to rescue the hostages.’ Max was played by Mark Strong in 6 Days.’

Mr Vernon had experience of sieges, having been involved at Balcombe Street five years previously, when the IRA held two hostages for six days before surrendering.

The Met Chief Superintendent recalled: ‘I watched them negotiate at Balcombe Street and thought the guy who did it made a right cock-up.

‘He insulted them. I don’t want a rapport with any bloody villain, but I do want communication. You don’t get that if you’re rude. Negotiation is a fencing match, you can’t afford to be on the back foot.’

Rusty Firmin, who was a Lance Corporal in the Squadron, claimed without Mr Vernon ‘the outcome could have been very different’.

Mr Firmin told the Mirror: ‘Max Vernon was the head negotiator. He kept them talking for six days and bought us time.

‘He deserves more credit than he ever got. Without that extra time the outcome could have been very different.’

Speaking to the Sunday Express in March 2019, when Mr Vernon was described as being ‘now 83 and in a wheelchair’, Mr Firmin said that the Metropolitan Police’s head negotiator considered himself ‘a failure’.

He said: ‘Max strung it out for six days under severe pressure.

‘It took us 37 years to actually get to speak to each other but a nicer guy you could not wish to meet.

Six gunmen forced their way into the embassy in West London in April 1980, demanding independence for part of southern Iran and taking 26 hostages.

They killed a hostage after six days, which led then Prime Minister Margaret Thatcher to order the SAS to storm the building.

The SAS teams, who had arrived secretly in London from their Hereford base carried out rescue mission Operation Nimrod.

Millions of watched on television in awe as they tossed stun grenades into the building to begin their assault.

The raid lasted just 11 minutes and all but one of the six gunmen were shot and killed. A second hostage was shot dead by the gunmen and two others seriously wounded.

Mr Vernon said he knew of the grave threat if he said the wrong thing.

He said he was not seeking rapport with the terrorists, adding: ‘That type of individual I detest because of what they were doing. All I wanted to do was control the situation and communicate.’

Another part of Mr Vernon’s heroism during the attack saw him volunteer to ferry cigarettes to the front door of the embassy to get pictures of the criminals inside.

He admitted they could have shot him or added him to their hostage list, adding it was not pleasant to look down to barrel of a machine gun.

In candid remarks, Mr Vernon noted the pressure it caused his family escaped him at the time. 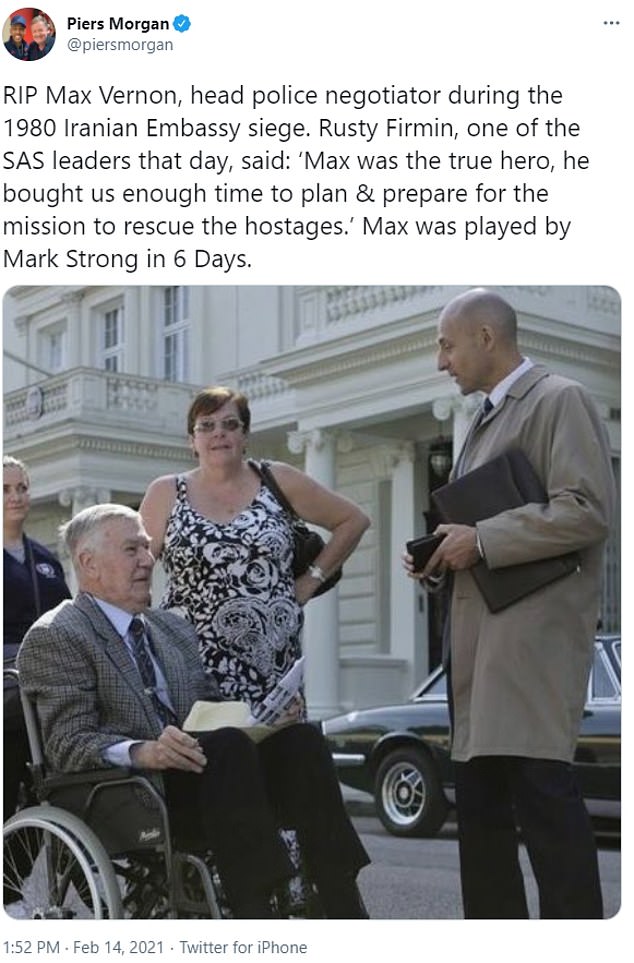 The Iranian embassy siege: The day the SAS emerged from the shadows

The siege began when a group of six gunmen stormed into the Iranian embassy in South Kensington, London, on April 30th 1980.

They took mostly embassy staff hostage but among them was BBC sound recordist Sim Harris who was at the embassy to get a visa.

PC Trevor Locke, a member of the diplomatic protection squad and on duty at the building, was also among those held at gunpoint.

The terrorists demanded the release of prisoners in Khuzestan Province in southern Iran during a series of tense negotiations with the police who sealed off the embassy and surrounding streets. The gunmen also demanded safe passage out of the Britain.

After becoming frustrated with the lack of progress over five days they shot one of the hostages and threw his body out of the embassy.

The death was the signal for the SAS – motto Who Dares Wins – to be sent in.

The SAS teams, who had arrived secretly in London from their Hereford base, were given permission by Prime Minister Margaret Thatcher to carry out a rescue mission given the code name Operation Nimrod.

On the evening of May 5th TV news cut into normal programming to broadcast the beginning of the end of the siege as the SAS soldiers all clad in black abseiled down the front of the building.

Millions watched in awe as they tossed stun grenades into the building to begin their assault.

The raid lasted just 11 minutes and all but one of the six gunmen were shot and killed.

A second hostage was shot dead by the gunmen and two others seriously wounded.

The televised raid was the first time the British public had ever seen the Special Forces soldiers in action and elevated them to superstar status.

Fawsi Najad, the surviving gunman, was jailed for life and freed in 2008 after serving 27 years. He was granted leave to remain in the UK.

He said his wife switched off the television in front of his children saying ‘if dad is going to get himself killed, I don’t want to see it’.

Mr Vernon was played by actor Mark Strong for the 2017 film 6 Days.

In an interview given to the Mail on Sunday, Mr Vernon said that his wife wanted Liam Neeson to play him in the movie.

‘I’ve never thought who I’d like to play me in a movie, though my wife says it should be Liam Neeson,’ he revealed.

‘When I met Mark Strong I said to him: ‘You’re not the right person for the role.You’re only 6ft 2in, I’m 6ft 4in and I’ve got more hair than you!’

‘Actually, he’s ideal. He gets the need to be calm beautifully. If I’d had a voice like his, I might have been a bit more successful in talking people out of things.’

Mark Strong told the paper: ‘Max was a behind-the-scenes character, the quiet, effective one.

‘His remit was to get everyone out alive and avoid use of force. Trying to solve a problem with talk. And that’s what I had in my head when playing him: his voice was his weapon.’