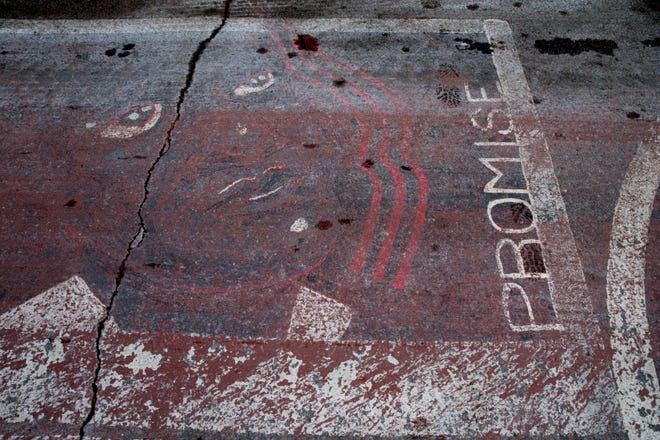 CINCINNATI — In the aftermath of civil rights protests last summer that swept through the country, local artists painted a Black Lives Matter mural in front of Cincinnati City Hall.

Blessed by Cincinnati city officials and unveiled on Juneteenth amid singing, dancing, poetry and political speeches, the mural was an internet sensation.

But once the fanfare died down, the downtown mural was left to rot.

Street barriers protecting the mural were taken down the next day, with a councilwoman stepping in to briefly put the barriers back.

Somebody dumped red paint on it one night. They were never caught and the paint stain remains.

Friday, as the Pan-African flag was raised outside City Hall for the first time, celebrated with a ceremony that drew people from Cleveland, Dayton and Columbus, the mural was a shadow of itself.

It’s coated in salt used to battle the snow and ice. Jagged cracks of asphalt peek through where the street has eroded. The red paint stain is a faded pink blur, marring a corner of the mural.

A vote, and then nothing

Cincinnati City Council unanimously passed an ordinance last June 17 saying the mural should be painted and maintained by the city.

Alandes Powell, the visionary behind the mural, has said that those conversations are still going on and she’s hopeful.

“Our vision was for it not to leave until we’ve made progress in these areas, that the bat signal needs to stay there,” Powelltold The Cincinnati Enquirer, part of the USA TODAY Network Friday.

The artists involved said they are not surprised about the state of the mural today.

More:A massive Black Lives Matter mural has been dedicated to George Floyd in front of his high school

Powell is working with City Councilman Greg Landsman and Mayor John Cranley to fix the mural. Some things talked about include repainting it where it is, repainting a smaller version and even painting a second mural on a city street that’s easier to close to traffic and create the proposed gathering space.

“It’s definitely going to preserved,” Landsman said. “It’s an absolutely beautiful mural and it’s representative of not just the critical Black Lives Matter movement, but these incredibly talented artists and the stories they have to tell.”

‘We need to see how we can preserve it’

Holly Stutz Smith, the mayor’s chief of staff, said Cranley has spoken with the artists and the Urban League of Greater Southwestern Ohio and will soon bring forward a plan to pay for new paint and add a historical marker to the current mural location.

Weather during the winter months made it necessary to wait, she said.

Powell estimated  it would cost $10,000 to $20,000 to touch up the mural each year. Landsman said it’s difficult to close the street  in front of City Hall because there is a business across the street and two churches who need the road open for weddings, funerals and weekly services.

Powell is open to a lot of possibilities. In addition to touch-up, she’s interested in seeing standing letters like the “Sing the Queen City” statue on The Banks. She wants plaques added around the mural so people understand the vision behind each letter. She’d love for the area to be a pedestrian walk way.

Councilwoman Lemon Kearney is hopeful a pedestrian plaza will still be created.

“It should be a beautiful place for people to gather and talk about race relations,” Kearney said. “This (last) summer people came and they talked. City Hall is the citizen’s house. It would be nice to have a gathering space in front of the people’s house.”

She acknowledged the mural would likely have to be repainted.

Kearney said other cities have street murals that are somehow protected.

“We need to see how we can preserve it,” Kearney said.

To Brandon Hawkins, senior director of artists and project manager for the mural, just the painting of the mural is symbolic of the Black Lives Matter movement.

“The day it was completed was more important than the days that continue to pass by,” Powell said. “The physical mural did its part. It spoke out pretty loud. It said what it needed to say.”

This news is auto generated from USA Today using automated computer software. We are not editing or creating this story. Therefore the Site is not responsible for any of this content.

Twins conjoined at chest separated in 6-hour operation in Mumbai |...