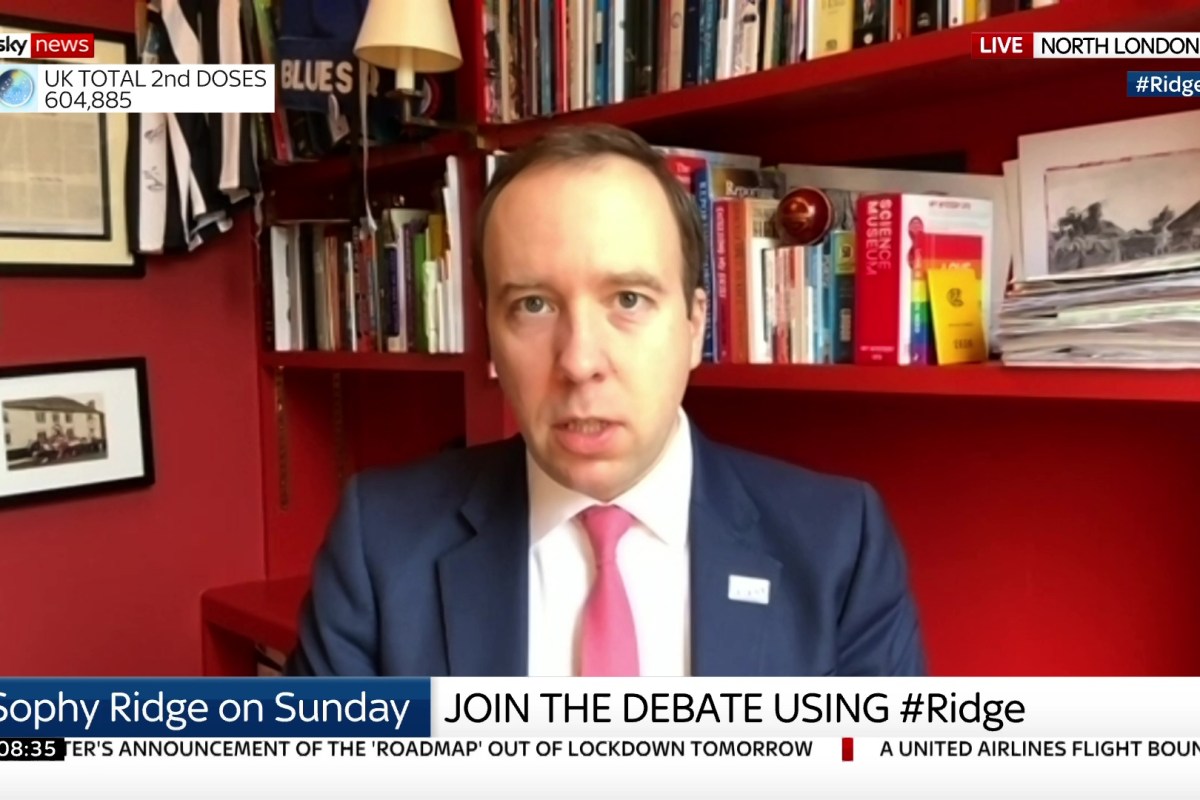 THE deadly mutant Covid variants from Brazil and South Africa are FALLING in the UK, Matt Hancock said today.

The Health Secretary this morning said there was evidence that the stricter measures – including contact tracing and stricter border measures – had slowed the spread of the new strains.

? Read our coronavirus live blog for the latest news & updates…

Speaking to Sophy Ridge on Sunday, he said: “We’ve now got a much stronger vigilance in place, because everybody coming into the country has to be tested and we sequence the results of those tests.

“And we’ve also got a very strong set of actions working with the local authorities very specifically in the areas where a new variant is found.

“We hit it hard and send in enhanced contact-tracing and go door-to-door.

“We’ve now got this programme in place to be able to really, really try to stamp out a new variant where we see it. There is evidence that is working.”

But he cautioned that data would be carefully monitored as the lockdown is lifted, saying: “We have seen throughout this pandemic that there have been moments when things haven’t got as we expected – for instance, when the new variant was first discovered in Kent.”

Boris Johnson forced England into its third national lockdown in January after a more infectious strain of Covid emerged.

At the time, he begged Brits to stay at home, saying: “It’s both frustrating and alarming to see the speed that the new variant is spreading.”

And now after weeks of strict lockdown rules, Brits will tomorrow find out the Prime Minister’s roadmap to lifting the restrictions.

Pub gardens expected to be allowed to open their doors by March.

As part of the announcement, non-essential retail is expected to be told they will be able to open before the end of April.

Six people or two households will also be allowed to meet outside as part of the rollout.

It had previously been hoped that pub gardens would be able to reopen in April but confidence in the vaccine rollout could see the date moved forward if cases continue to fall.

But the Health Secretary declined to comment on the details of the road map, which has yet to be signed off by Cabinet ministers.

Mr Hancock today told Sky: “We have set out very clearly that getting schools back is the top priority amongst all the different things that we want to do to get life back to normal.”

He added: “Whilst we want to set out a road map which gives people guidance in terms of how we think we will be able to do this, we also absolutely will be vigilant to the data on the way.”

Outdoor family gatherings could be allowed within weeks as lockdown eases