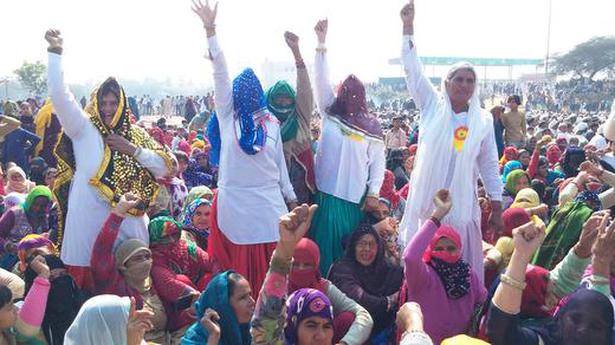 A mass movement that will not fail, says BKU’s Rakesh Tikait.

A huge turnout of women farmers on February marked the mahapanchayats or gatherings against the farm laws in Haryana’s Jat belt, and among the Meo Muslims of the Mewat region in Rajasthan. Bharatiya Kisan Union (BKU) leader Rakesh Tikait, addressing the gathering in Haryana, said that the agitation was a mass movement and would not fail.

Representatives of khaps, religious leaders, and political leaders were present.

Speaking at Haryana’s Charkhi Dadri, Mr. Tikait said the ongoing agitation was a movement for the farmers’ freedom and did not belong to a particular caste or community. “It is a mass movement. It will not fail,” he asserted.

Mr. Tikait said the khaps had fought against the Mughals and the British, and that they were still relevant and must stayed united. “They tried to divide Punjab and Haryana. They might try to create differences among khaps as well,” he said.

Mr. Tikait said the present regime was pro-businessmen and they were in the “business of hunger”. “They will increase the price of food as hunger rises. But food cannot be kept locked inside a vault,” he said.

Mr. Pal said that 500 farmer unions had come together to fight against the farm laws. Mr. Rajewal said a movement reached its logical conclusion when the energy of the youth and the experience of the elderly came together.

Farmer leader Raju Maan said the massive turnout at the mahapanchayat proved that not only the farmers but their children were also awakened, and they would not stop till the government bowed to their demands.

At Rajasthan’s Bharatpur, Maulana Arshad of the Meel Kheda madrasa, presiding over the rally, said the Mewat region’s people would fight to protect agriculture, which was the mainstay of their livelihood. BKU leaders Gurnam Singh Chaduni and Yudhvir Singh affirmed that farmers were willing to talk to the Bharatiya Janata Party (BJP)-led government at the Centre if the latter had “genuine intentions”.

Earlier, a 50-year-old farmer from Haryana’s Jind was found hanging from a tree on Sunday morning. Deputy Superintendent of Police, Bahadurgarh, Pawan Kumar said the deceased had left behind a note demanding the repeal of the three farm laws. He is survived by his wife and three daughters.

(With inputs from Mohammed Iqbal in Rajasthan)

Whisky, champagne and a bar tab stitch-up: How the Six Nations...