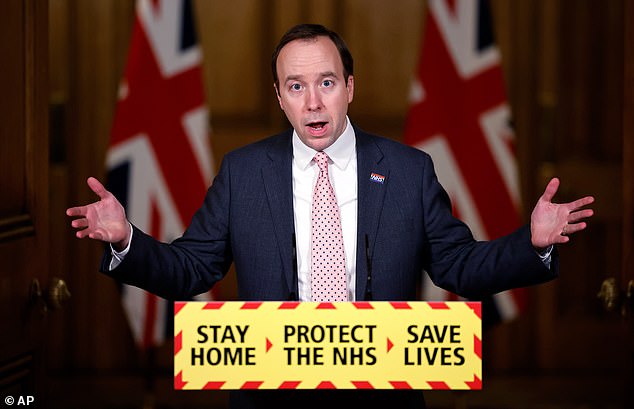 And the Health Sec had only gone and scored 20million of the things. Lovely jubbly! When Mr Hancock makes these sort of excitable announcements you can almost hear the collective rattle of tea cups all the way up Whitehall.

More often than not it means someone somewhere out in the Shires linked to the Government is about to be quids-in.

Mr Hancock was his usual zingy, Saturday night game-show host self. Part Leslie Crowther of The Price Is Right fame, part Zebedee from The Magic Roundabout

Come PMQs tomorrow, it is quite feasible that we will learn that one of Surescreen’s directors just happens to be an old drinking pal of Hancock’s from university. Or the godson of the man he plays tennis doubles with on Saturday.

That’s usually the pattern anyway. Remember when his old landlord won a £30million testing contract? Hancock was speaking at the latest Downing Street press conference, where for a while now he has been the Government’s go-to man whenever there’s nothing particularly interesting to announce or the Prime Minister simply can’t be fagged to attend.

Mr Hancock was his usual zingy, Saturday night game-show host self. Part Leslie Crowther of The Price Is Right fame, part Zebedee from The Magic Roundabout. He seems immune to the rusty grind most of us experience on Mondays. To be fair, the year he’s had he’s probably forgotten what a weekend is. 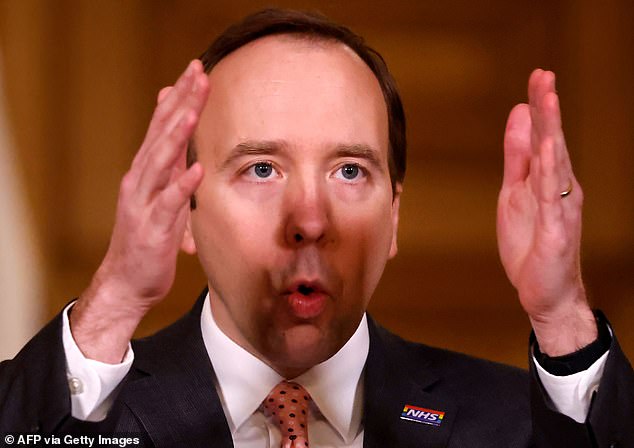 Hancock was speaking at the latest Downing Street press conference, where for a while now he has been the Government’s go-to man whenever there’s nothing particularly interesting to announce or the Prime Minister simply can’t be fagged to attend

Once again Hancock was beaming about the vaccine programme. It had been two months to the day since the injection of that first vaccine shot got him all blubbery on live TV. Since then, 12.2million people have been inoculated. That’s one in four adults.

He announced that the take-up of the vaccine had been much higher than he expected. So far, it has been around 90-odd per cent.

Hancock claimed the Government had only expected it to be around 75 per cent. That will have been a deliberate low-ball estimate just so Hancock could boast about surpassing it.

As for the test and trace programme, it was now performing ‘brilliantly’ he insisted.

The Health Secretary is never shy about giving himself a glowing report, is he? His memoirs are going to be a hoot.

With Hancock was Dr Nikita Kanani, director of NHS England. Also present: Professor Jonathan Van Tam, or as Hancock rather matily refers to him, ‘JVT’.

Incidentally, brevity seems to be all the rage among Government figures these days. Earlier, when Chancellor of the Duchy of Lancaster Michael Gove appeared in front of the European scrutiny committee, someone kept referring to him as ‘CDL’. Weird.

JVT wrinkled his snout and made some reassuring noises about the AstraZeneca vaccine. There had been some confusing headlines cropping up over the weekend claiming it was ineffective against the so-called South African strain of the virus.

Cobblers, said JVT. There was plenty of evidence existing vaccines were effective against it, or at the very least stop you getting seriously ill. 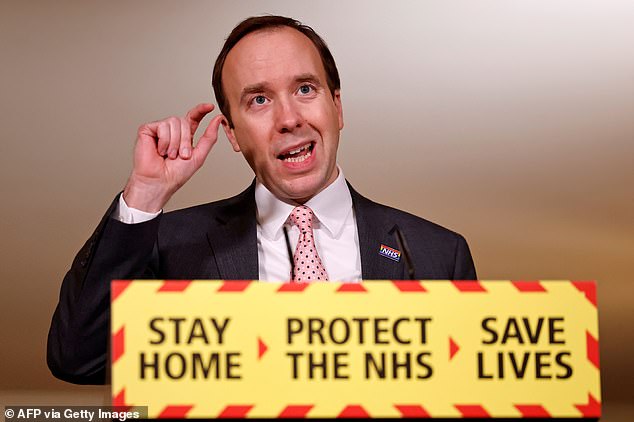 The Health Secretary is never shy about giving himself a glowing report, is he? His memoirs are going to be a hoot

He warned people not to wait for another vaccine tailor-made to combat this new strain. Protect yourself now against the ‘clear and present danger’, he advised. You can always get revaccinated later on if needs be.

He’s a soothing presence at these pressers, Van Tam. He admitted a lot of these stories were scary but urged everyone not to panic. No wonder housewives keep telling me how they want to cuddle him. Someone from The Sun asked about reports the ‘rule of six’ restriction might reintroduced next month.

‘We’re not going to get into this at all,’ Hancock replied huffily. ‘It’s too early say.’ He told us to wait for the PM’s roadmap which is being published on February 22.

It is notable how reticent the Government now is about throwing out rays of sunshine. Since this third lockdown was introduced, there seems to have been a cross-departmental ban against putting anyone’s hopes up.

There was a question about travel restrictions. Should we expect them to last for months or years? ‘I can’t answer that,’ said JVT. ‘Too early to say.’