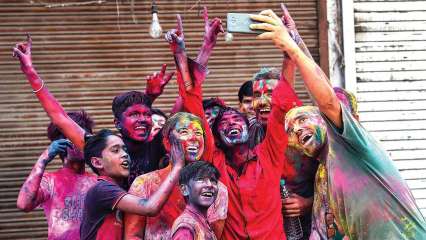 The sudden rise in COVID-19 cases in Delhi has forced authorities to impose restrictions on Holi and other celebrations in the national capital.

The Delhi Disaster Management Authority (DDMA) on Tuesday (March 23) ordered that there will be no public celebrations for the upcoming festivals in Delhi like Holi and Navratri.

“All authorities concerned will ensure that public celebrations and gatherings, congregations during upcoming festivals like Holi, Shab-e-Barat, Navratri etc shall not be allowed in public places/public grounds/public parks/markets/religious places etc in NCT of Delhi,” DDMA said in its order.

The Delhi government has also ordered officials to do random testing (RAT/RT-PCR) of passengers coming from other states which are reporting a surge in COVID-19 cases. The random testing is to be done at all airports, railway stations, inter-state bus terminals.

The ban comes on a day when Delhi saw its daily Covid tally rise sharply to 1,101 on Tuesday, as against 888 on Monday taking the total tally to 6,49,973 while four more deaths were reported.

According to the Delhi health bulletin, 620 patients were reported to have recovered from the infection, while the total active cases in the city stands at 4,411 on Tuesday. The positivity rate was 1.31 per cent, while the cumulative positive rate went up to 4.65 per cent.

Health Minister Satyendar Jain said that the national capital was witnessing 200 cases per day some time back but the number has started to rise again. Concerned with continuing spike, Lt. Governor Anil Baijal had on Monday advised authorities to conduct random testing of people coming from states with a high number of cases at airports and railway stations.

COVID-19: PGIMER Chandigarh to suspend OPD services from today due to rise in cases on campus