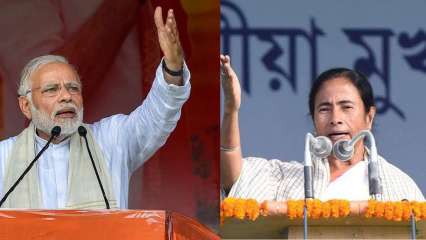 Sources close to Chief Minister said she did not attend the meeting as she was busy in the election campaign ahead of the fourth phase of the assembly elections.

This is not the first time the West Bengal Chief Minister has not attended a meeting convened by the Centre.

Over the past few years, the West Bengal Chief Minister has on several occasions missed the meetings convened by Niti Aayog.

Banerjee had skipped the meeting of chief ministers chaired by the Prime Minister on March 17 over growing cases of COVID-19 and the vaccination drive.

Trinamool Congress sources had said at that time the West Bengal Chief Minister was not able to attend the meeting as she had pre-scheduled election meetings.

Earlier on January 23, Banerjee did not deliver her speech “in protest” at an event at Victoria Memorial in Kolkata to mark the 125th birth anniversary of Netaji Subhas Chandra Bose after `Jai Shree Ram` slogans were raised when she was invited to speak.

She later said “government programme should have some dignity” and it “is not fair to insult somebody whom you have invited”. The event was presided over by Prime Minister Narendra Modi.

The TMC chief did not take part in NITI Aayog in June 2019. Ahead of the meeting she wrote to the Prime Minister that “the NITI Aaayog has no financial powers and the power to support state plans it is fruitless for me to attend the meeting”.

She also skipped the NITI Aayog meeting on June 11, 2018, as she was visiting north Bengal for administrative review meetings. PM Modi and West Bengal Chief Minister have strongly targeted each other during the West Bengal elections. The fourth phase of polling will be held on April 10.

Brazilians OBLIVIOUS to new strain of coronavirus sweeping the country