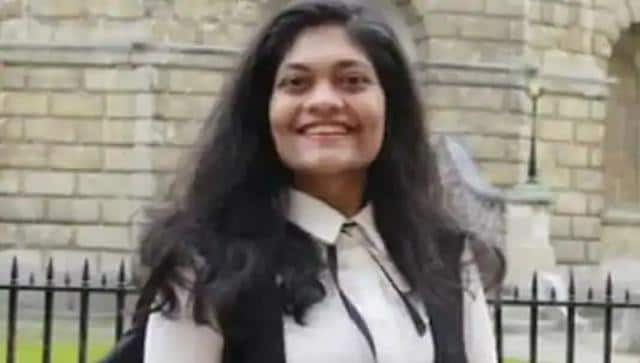 Samant, who was elected as president of Oxford Student Union in February, resigned amid controversy after some of her social media posts were branded as ‘racist’ and ‘insensitive’

Editor’s Note: On Monday, the Oxford India Society, Oxford Hindu Society, and Oxford South Asian Society released a joint statement saying the resignation of former Oxford Student Union President Rashmi Samant had nothing to do with her nationality or her religion.The societies said they were issuing the joint statement to address the ‘misleading media coverage’.

This comes just days after S Jaishankar, addressing her resignation in the Rajya Sabha in response to claims by a BJP MP that racism and cyberbullying forced Samant’s resignation, said that India would take up the issue of racism with the United Kingdom if possible and that the land of Mahatma Gandhi would never turn its eyes away from racism.

Samant, who was elected as the president of the Oxford Student Union (SU) in February, resigned just days after some of her old social media posts were branded as ‘racist’ and ‘insensitive’.   These included a holocaust reference on a post during a visit to the Berlin Holocaust Memorial in Germany in 2017 and an Instagram caption on a picture of herself in Malaysia that read “Ching Chang”, which upset Chinese students.The 22-year-old was also criticised by the Oxford LGBTQ+ campaign for a ‘transphobic’ post.

Following is the full text of the statement:

The Oxford India Society, Oxford Hindu Society and Oxford South Asian Society believe that there is a need to address the misleading narrative on a recent series of events at the University of Oxford surrounding the former Student Union President-Elect, Ms Rashmi Samant.

We, the aforementioned societies, unequivocally condemn all forms of discrimination based on, but not limited to, race, religion, national origin, caste, sex, sexual orientation and gender identity. We recognize that a culture of institutional racism is prevalent in the University, and that racism is a lived reality for several members of the University, including brown students. It is with utmost caution, therefore, that we wish to clarify that this is not why Ms Samant had to resign, and by that, we mean that neither her nationality nor her religion are what prompted the calls for her resignation. Her narrative of this being a racist attack against her undermines real experiences of racism of students at the University.

There is no doubt whatsoever that Ms Samant’s now-deleted posts on social media are racially insensitive towards the East-Asian and Jewish communities, and are transphobic. Therefore, although the student body voted for Ms Samant because of the pledges on her manifesto, ultimately, her insensitive remarks about other minority groups and refusal to accept responsibility for her actions are what prompted calls for her resignation. We reiterate that these calls did not have anything to do with the fact that she is Indian or Hindu or a woman. In fact, the entirety of the Student Union Sabbatical Officer team elected this year is constituted by BAME (Black, Asian and Minority Ethnic) women, including another Indian woman born and raised as Hindu.

Ms Samant’s failure to take responsibility for her actions, and her attempts at justifying her offensive remarks are reprehensible. We, therefore, express our solidarity with both the Oxford University Student Union Campaign for Racial Awareness and Equality, and LGBTQ+ Campaigns who previously released statements calling for Ms Samant’s resignation from her position of President-Elect.

Recent coverage of these events in Indian media has incorrectly portrayed that Ms Samant’s resignation was prompted by an irresponsible social media post from a staff member (not a professor) and by racist comments. This is far from the truth, not least because the said social media post came only after Ms. Rashmi’s resignation. We are concerned that this diverts the focus away from Ms Samant’s evasion of accountability, and the harm that her actions have caused. It dismisses the Oxford student community’s legitimate demand for accountability from an elected student representative. This demand was expressed through democratic means, including no-confidence motions at four constituent colleges. Any mischaracterisation of such democratic demands as ‘cancel culture’ is deplorable. We are deeply concerned that sections of the Indian media are trying to pretend that this issue is one of racism against Hindus or Indians. As societies representing the Hindu, Indian and South Asian populations on campus, we are displeased by this false narrative, and urge the media to stop pedaling disinformation in the garb of news.

We regret that this series of events has caused various members of the Oxford student community to be subject to online bullying. Often, the same groups hurt by Ms Samant have been asked to defend themselves and had their lived experiences denied. This is abhorrent. We are acutely aware that Ms Samant’s post-resignation comments and interviews are feeding into the dangerous Hindutva narrative in India that is fundamentally exclusionary and discriminatory. That Ms Samant is unable or unwilling to see this, despite having run on a platform of ‘inclusion’ and ‘decolonization’ in Oxford, is unfortunate.

We further strongly disapprove of the actions of Dr Abhijit Sarkar, Postdoctoral History Researcher at New College. Dr Sarkar’s social media posts about Ms Samant’s parents and their religious beliefs had no place in a conversation about Ms Samant’s reprehensible actions. She cannot be viewed as her parents – any criticism of her actions should refer to those actions alone, and certainly not her family background. It is imperative that Dr Sarkar take responsibility for his words and apologise to Ms Samant.

We urge Ms Samant to refrain from further commenting on this situation, and instead, educate herself on the harm she has caused, as she promised she would in her initial letter to the Oxford student community. We understand that Ms Samant has filed an official complaint against Dr Sarkar. Therefore, we demand that the University give a fair consideration to her complaint and decide on appropriate disciplinary consequences as per University rules and regulations.

We finally request the media and concerned citizens to understand the series of events in context, and listen to the student community’s position. Oxford students come from diverse backgrounds and identities, and we believe that our identities must be exercised and protected in a manner that is inclusive of other identities and embraces the intersectional struggle against all kinds of oppression. As student societies that primarily cater to minority groups in Oxford, we will continue to work to make Oxford a safe and tolerant space for all.

The text has been reproduced from Oxford India Society’s Facebook page and has not been edited by Firstpost for style or content.