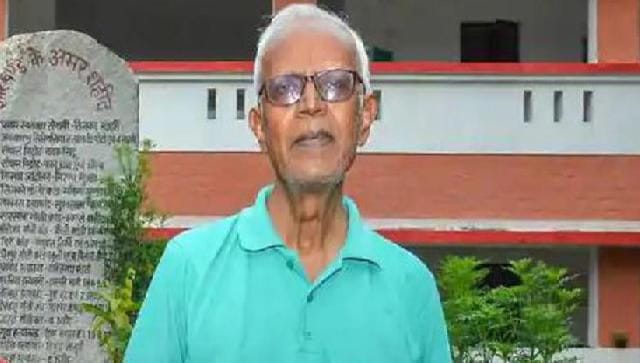 Special judge DE Kothalikar, who rejected Swamy’s bail plea on Monday, also said in his order that based on the material available on record, the social activist seemed to be a member of a banned Maoist organisation

Mumbai: The special NIA court that refused bail to the 83-year-old Jesuit priest and activist Stan Swamy in the Elgar Parishad-Maoists links case has held that prima facie Swamy had hatched a “serious conspiracy” with members of a banned Maoist organisation to create unrest in the country and to overthrow the government.

Special judge DE Kothalikar, who rejected Swamy’s bail plea on Monday, said in his order, which was made available on Tuesday, that based on the material on record it seemed Swamy was a member of a banned Maoist organisation.

The material that the court referred to included around “140 e-mails between the applicant (Swamy) and his co-accused,” the fact that Swamy and others he communicated with, were referred to as “comrades”, and that Swamy had received Rs eight lakh from one comrade, Mohan, allegedly for the furtherance of Maoist activities.

“Prima facie it can be gathered that the applicant along with other members of the banned organisation hatched a serious conspiracy to create unrest in the entire country and to overpower the Government, politically and by using muscle power,” Judge Kothalikar said in his order.

“The material placed on record thus prima facie denote that the applicant was not only a member of banned organisation CPI (Maoist) but he was carrying out activities further in the objective of the organisation which is nothing but to overthrow the democracy of the nation,” the order read.

Swamy was arrested from Ranchi in October 2020, and has since been lodged at the Taloja Central Jail in Navi Mumbai.

The judge also refused to take into account a published report of alleged tampering with the computer of Swamy’s co-accused in the case, Rona Wilson.

He said that raising questions on the authenticity of the evidence in the case would amount to interference with the court proceedings.

“It is well known that the present proceeding is sub judice. Therefore, making any comments as to the evidence to be placed before the Court would amount to interference in the administration of justice. In fact, such action is required to be deprecated,” the order said.

Swamy had applied for bail in November last year both on medical grounds and on merits.

He had said in his plea that he suffered from Parkinson’s disease and had lost hearing in both his ears.

Swamy had also argued that while in the Taloja prison, he had to be shifted to the prison hospital owing to his ill health.

Swamy’s lawyer Sharif Shaikh had told the special court that the activist was not a flight risk and will not jump bail.

Swamy also said in his plea that his name was not even part of the original FIR but was added in the remand application in 2018 by the police as a suspected accused.

Shaikh argued that the NIA had failed to find anything incriminating against Swamy in the raids conducted at his home in Ranchi.

The court, however, held the fact that Swamy had not been named in the initial FIR, did not entitle him to any relief.

On his health condition, the judge cited previous Supreme Court judgements to hold that given the seriousness of the allegations made against Swamy, the “collective interest of the community would outweigh Swamy’s right to personal liberty”.

“As such the old age and or alleged sickness of the applicant would not go in his favour,” the judge said.

Special Public Prosecutor Prakash Shetty, who appeared for the National Investigation Agency (NIA), had opposed Swamy’s bail application, saying he was involved with the banned Communist Party of India (Maoist).

Shetty had told the court that Swamy was a staunch supporter of organisations such as ‘Vistapan Virodhi Jan Vikas Andolan’ and ‘People’s Union for Civil Liberties’ which were involved in activities for the CPI (Maoists).

Judge Kothalikar accepted the prosecution’s submissions saying they had “substance”.

“Upon cumulative consideration of all the aforesaid circumstances as well as the law on the subject, I conclude that the applicant has failed to make out a case for grant of bail,” the judge said.

The case relates to alleged inflammatory speeches delivered at the ‘Elgar Parishad’ conclave held at Shaniwarwada in Pune on 31 December, 2017, in which police suspect triggered violence the next day near the Koregaon- Bhima war memorial located on the outskirts of the city.

Varavara Rao, Wilson and some other activists are being tried at a special court here after the NIA took over the probe.

The Pune police had claimed that the conclave was backed by outlawed Maoist groups.

Mark Wood relieved to finally get wicket before rest from England...