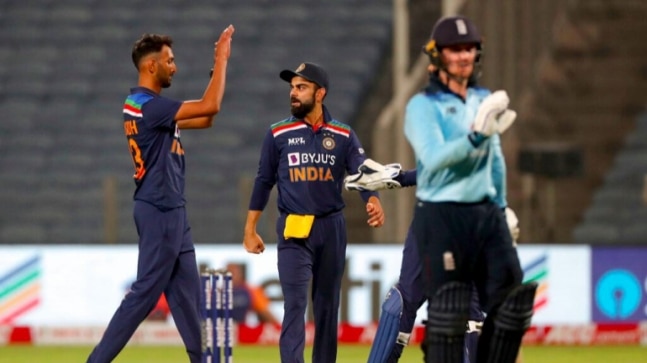 Team India fast bowler Prasidh Krishna made a memorable debut on Tuesday to help the hosts beat England by 66 runs in the first ODI in Pune. Krishna recorded the best bowling figures by an Indian on debut in ODIs as India bowled out England for 251 after posting 317 for 5 on the board.

Krishna ended up with 4 wickets for 54, which also included a maiden over ,to set a new Indian record in the format. He is the first Indian to bag a 4-wicket haul on ODI debut, bettering the previous best of 3 for 21 by Noel David against the West Indies in 1997.

16 bowlers had taken 3 wickets on ODI debut for India before Krishna bettered them all by sending back Jason Roy (46), Ben Stokes (1), Sam Billings (18) and Tom Curran (11) to complete a remarkable turnaround for himself and Team India.

Krishna, who plays for Kolkata Knight Riders since making his IPL debut in 2018, credited the cash-rich T20 tournament after his match-winning performance.

“It didn’t start off well, and they came hard at us because we bowled poorly, but we had belief. We picked wickets in a cluster and that helped us a lot.

“I understood after my third over, I can’t bowl full, and then I hit good length areas, and let the ball do the rest. IPL has helped me, but it’s important in a 10-over format it’s more important to come back,” the 25-year-old said.

‘GOING BACK TO THE DRAWING BOARD’

Krishna had a disastrous start with the new ball as he conceded 37 runs from his first 3 overs but bounced back in style later in the match with 4 wickets for 17 runs in his next 5.1 overs.

“I’m going to go back to the drawing board and improve upon it. I hope I can be the partnership breaker for long, because the team needed it at the time, so I was happy to do it.

“The talk from the beginning was that if we get one wicket it’ll change things around and that’s exactly what happened,” Krishna added.

India registered their first win over England since July 2018 to take a 1-0 lead in the 3-match series.

The hosts rode on brilliant knocks from Shikhar Dhawan, KL Rahul, Krunal Pandya and Virat Kohli to post a challenging 317 for 5 in 50 overs after being asked to bat first by England captain Eoin Morgan.

Dhawan top-scored with 98 while Rahul and debutant Krunal both remained not out on 62 and 58 respectively. Kohli also contributed with 58 runs for his team.

The next match will be played at the Maharashtra Cricket Stadium on March 26.

Electric Cars Are Coming, and Fast. Is the Nation’s Grid Up...