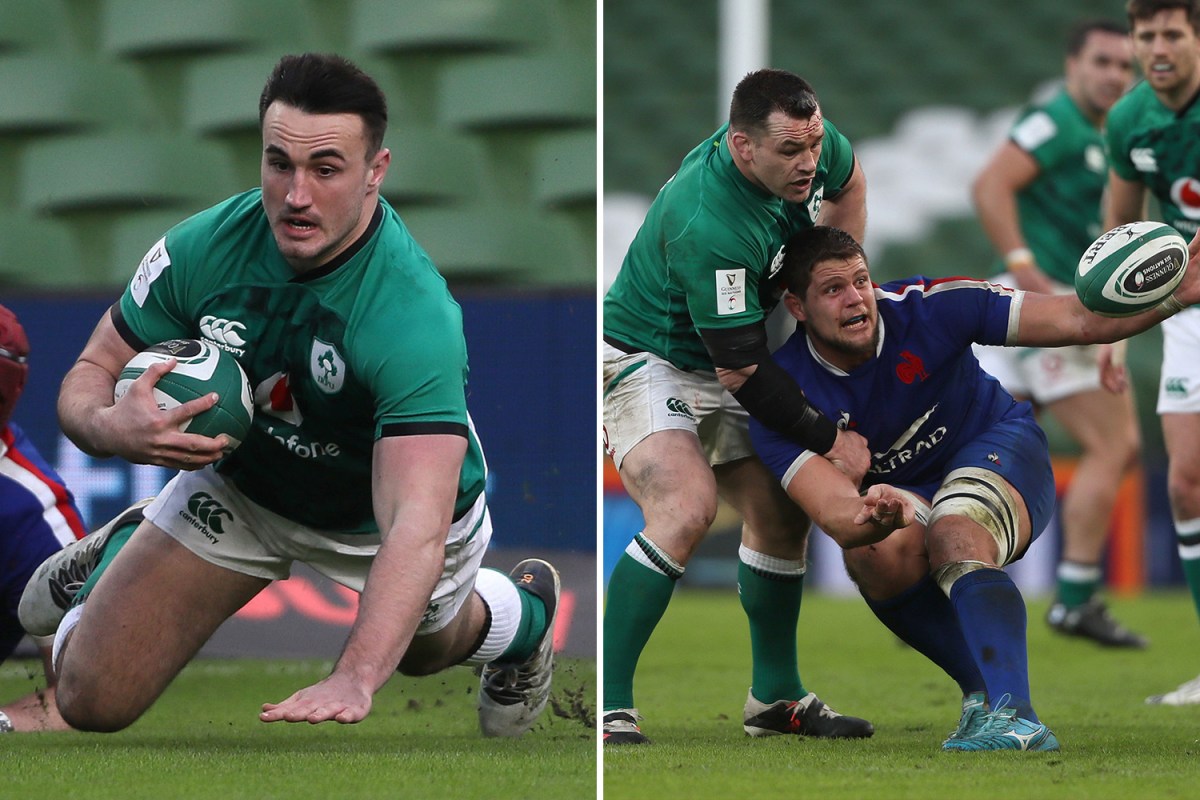 IRELAND suffered a third straight defeat in the Six Nations as France edged out winners at the Aviva Stadium.

Andy Farrell’s side were beaten in Paris in October and Fabien Galthie’s side were again too good as they claimed their first win in Dublin in a decade.

Throw in the loss to Wales last weekend and it is a miserable streak for Ireland, who were without many of their star names for this clash.

Ireland were decent in the first half but contrived to go in seven points behind at the break.

France were dominant after the break but made life difficult for themselves before ultimately emerging as victors.

Ireland started the game well and were dominant in the set-piece, particularly in the lineout where they succeeded in disrupting France.

But a fumble following a good Rhys Ruddock take provided France with their first opportunity to take the lead.

A penalty was eventually conceded but Matthie Jalibert kicked it wide, as did Billy Burns with his first effort which would have hardly helped his confidence on his first Six Nations start.

He did put Ireland on the scoreboard midway through the second half and when Bernard Le Roux was sinbinned for tripping Keith Earls, Ireland looked well-placed to kick on.

Following a lineout maul, Burns and Hugo Keenan combined to put James Lowe away in the corner.

But, although the on-field decision was to award the try, it was over-ruled with replays showing Gael Fickou had succeeded in shoving Lowe’s trailing leg into touch.

If that was bad enough, things got worse before Le Roux returned to the action as France scored what was, from their point of view, a fine try.

From Ireland’s perspective, the decision of Jamison Gibson-Park to dart infield to try to help stop Fickou was disastrous as it left Charles Ollivson free to go over with Jalibert converting.

The out-half stretched their lead to seven points just before the break after Cian Healty was penalised for not rolling away.

The first two minutes of the second half were disastrous with Burns, Healy and Iain Henderson all departing because of head injuries.

Burns did not return but the prop and second row – who had collided with each other – returned to the action 15 minutes later after their bloodied brows had been patched up.

France extended their lead when Damian Penaud touched down in the corner after Lowe was caught out badly defensively.

Jalibert missed the conversion. It did not look like being significant but Ireland got themselves back into the game out of nothing.

Ronan Kelleher had just come on and his first action was a lineout.

Olivvon and Ultan Dillane contested, the ball spun loose with Kelleher pouncing on it and breaking a tackle to touch down.

Ross Byrne added the conversion and then nailed a penalty to narrow the deficit to just two points.

Jalibert could have given the visitors more breathing space but struck the post with a penalty.

It meant that, like last week, the result hung in the balance until the end but, as in Cardiff, Ireland again came out on the wrong side.