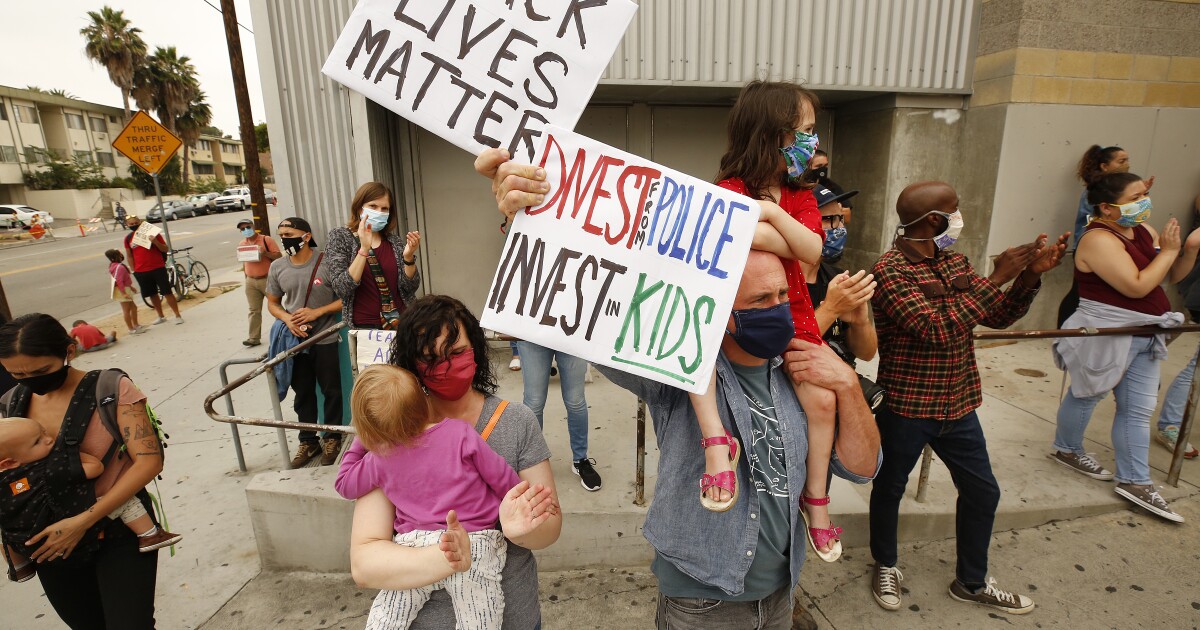 In a major overhaul of the Los Angeles School Police Department, the Board of Education on Tuesday approved a plan that cuts a third of its officers, bans the use of pepper spray on students and diverts funds from the department to improve the education of Black students.

The decision comes after a yearlong campaign by students activists and community members to reimagine the school police force, which they maintain disproportionately targets Black and Latino children. Their drive and recent calls to completely defund the school Police Department intensified following the police killing of George Floyd, which forced both cities and school districts across the country to consider how police use of force has disproportionately hurt Black Americans.

“We would not be at this point, though it is delayed admittedly, without the community’s leadership,” said board President Kelly Gonez. “I’m glad that the plan’s development also provided an opportunity for more engagement with our students, families and the broader community.”

The police overhaul by the Los Angeles Unified School District provides funding for school “climate coaches” who will work to promote positive school culture and address implicit bias at every secondary school. Staff to support and an achievement plan for Black students will also be added.

Board member George McKenna voiced strong concerns about it during the board debate.

“The parents expect us to have safe schools. And if you think the police are the problem, I think you got a problem yourself,” McKenna said.

Board member Jackie Goldberg noted that campus officers would not be disappearing from campuses, but they would still monitor schools and could respond to emergencies.

L.A. Unified follows some other school districts that have reduced or eliminated school police departments. The Oakland Unified School District school board unanimously voted to eliminate its school Police Department in June.

Los Angeles school police leaders have largely opposed the effort, and the $25-million funding cut led to the resignation of 20 officers.

The approved plan will cut 133 positions: 70 sworn officers, 62 non-sworn officers and 1 support staff member. At the meeting, Chief Leslie Ramirez said the reduction would leave the force with 211 officers.

During 45 minutes of public comments at the meeting, many speakers expressed support for the plan. Many identified themselves as students affiliated with the group Students Deserve, which has advocated for defunding school police. Some students expressed frustration over how long it has taken to divert the funds to their Black peers since the school board announced the funding cut in June.

The school board and broader community have been divided on the issue.

A district-commissioned survey showed that students, parents and staff generally had positive views of school police, with more than half of those in each group saying they believe school police make campuses safe.

But when broken down by demographics, 35% of Black students agreed with that sentiment, compared with 56% of Asian American and Pacific Islander students, 54% of Latino students and 49% of white students.

A similar pattern occurred with parents, where about 50% of Black parents agreed that school police made campuses safe, compared with 72% of Asian American and Pacific Islander parents, 67% of Latino parents and 54% of white parents.

Additionally, a quarter of Black female students said they did not feel safe with a school police officer present, the highest of all racial groups when broken down by gender. Twenty percent of Black male students also said they did not feel safe with an officer present. Black parents were also less likely to believe school police made campuses safe when compared to other racial and ethnic groups.