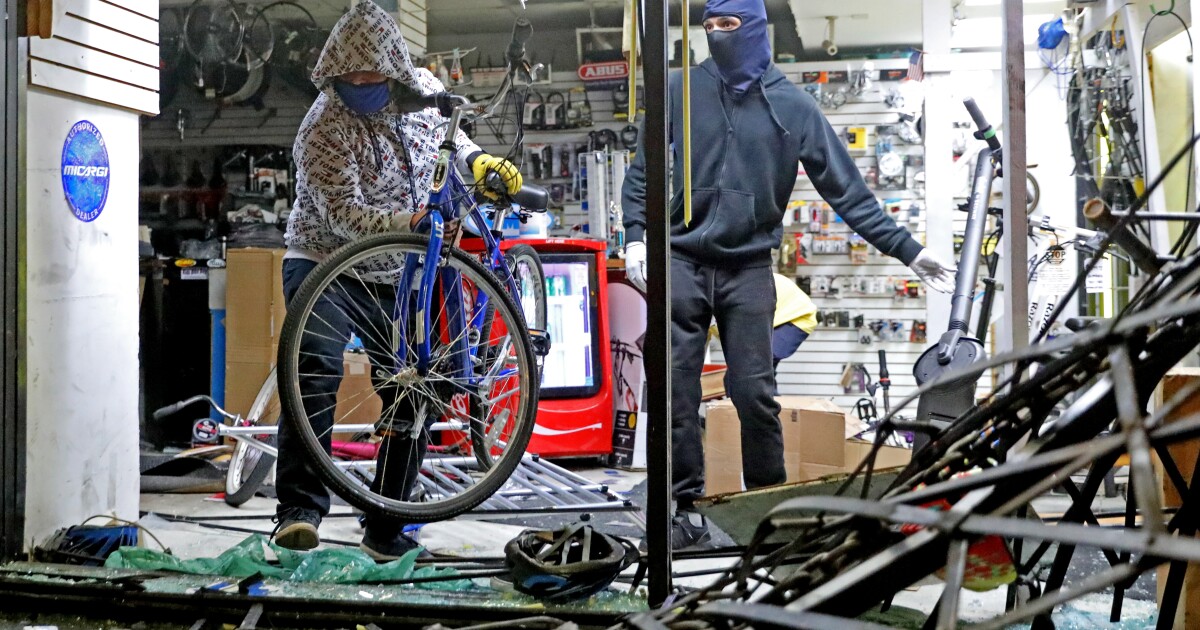 In a message from LAPD Det. Gerry Chamberlain that Ring relayed to customers in June, the detective said a LAPD task force was investigating incidents during the summer protests in which people were injured and property was “looted, damaged and destroyed.” Chamberlain said in the message that he was seeking videos shot during the protests in hopes that they could aid in the investigations.

Los Angeles saw weeks of protests in late May and early June over the killing of George Floyd by a Minneapolis police officer and other abuses of Black people at the hands of police. The protests were largely peaceful, but in some police clashed with protesters and stores were raided and fires were set.

The detective’s solicitation for videos raised concerns at the Electronic Frontier Foundation, a digital privacy nonprofit that obtained a copy of the email sent to Ring customers and other documents from the LAPD through a public records request, as well as other civil liberties groups. The groups are troubled by what they say is Ring’s willingness to cooperate with law enforcement agencies and viewed LAPD’s efforts to collect footage of the protests as potentially violating people’s right to protest without police harassment.

The refusal of the LAPD and Ring representatives to provide details on which days and areas of the city detectives sought video footage raised further concerns, the EFF said.

“Police could use any instance in the area — of a car break-in, a window being smashed, a trash can being turned over — in order to request 12 hours of protest footage,” said Matthew Guariglia, an EFF policy analyst who obtained the LAPD records. “Those cameras are aimed at protected activity.”

The LAPD on Tuesday said it could not answer questions about the parameters of the video request or how much footage it received in response. In an interview, Police Chief Michel Moore said working with private camera owners to gather video of crimes is “an important and lawful tactic” that helps police catch offenders.

Moore said the department has “no interest in identifying or tracking or warehousing imagery” of protesters expressing their 1st Amendment rights.

Ring officials said police agencies can submit requests for footage to the company, which then sends the requests to camera owners who might have footage helpful to the police. Requests from police must be related to a specific criminal investigation and are limited to 12-hour periods and to half-square-mile areas or smaller, the company said. Ring would not provide the specific parameters of the LAPD request.

A Ring spokesperson said the company’s policy “expressly prohibits” police from making requests for video of lawful activity such as protests.

Still, advocates said hours of video shot in areas of the city where tens of thousands of people gathered last summer to protest the killing of Floyd and other incidents of police abuse would almost certainly have captured activity protected by the 1st Amendment.

Guariglia, who has tracked Ring’s growing popularity and efforts by police across the U.S. to take advantage of the expansive camera network, said the LAPD emails document the first known example of law enforcement using Ring to investigate incidents related to the mass demonstrations that followed Floyd’s death. Knowing where and when the LAPD wanted video would help activists “ascertain just how tailored those requests are,” he said.

The ability to request footage from large numbers of Ring users at once has made efforts to collect surveillance on a large scale far easier for police agencies in recent years. What once took hours of door knocking by police officers can now be achieved through a single email blast sent to Ring customers through Amazon’s Neighbors app. It is generally up to the owner of a camera to decide whether to hand over the footage.

“Police don’t have to go through the checks and balances and hurdles of putting up their own cameras if they know there are reliable Ring cameras 10 to a block that they know they can request video from,” he said.

In a statement sent to the EFF, the LAPD said it was “not uncommon for investigators to ask businesses or residents if they will voluntarily share their footage with them.”

During the height of the summer protests, the LAPD received some criticism for using hundreds of officers clad in riot gear to aggressively push back protesters while organized criminals were left mostly unchecked to ransack nearby commercial corridors.

The SAFE LA Task Force has touted arrests of a number of individuals alleged to have been responsible for burglaries and arsons, but details about those cases remain limited. The LAPD denied a public records request by The Times for a full list of cases brought by the task force, saying such information represented investigative work exempt from disclosure.