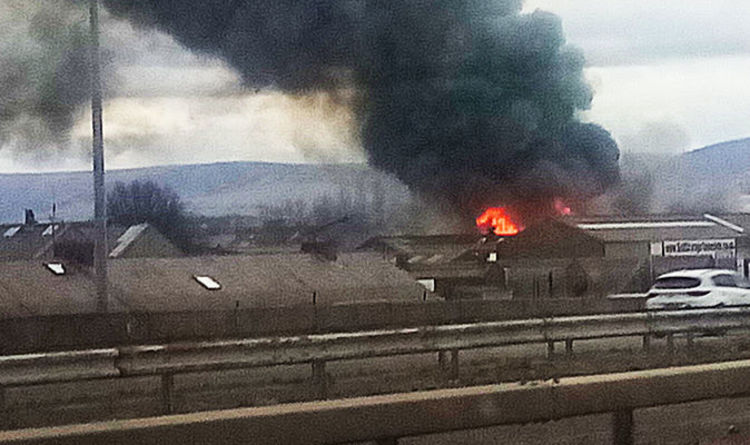 Six fire engines rushed to the site and are being assisted by a helicopter. Firefighters battling the blaze are using jets and an ultra-high pressure hose. The fire has reportedly spread to multiple parts of the warehouse. Crews from North West Ambulance service and Greater Manchester Police are also at the scene.

A witness said they heard an explosion coming from inside the building on Holland Street.

Neighbours took to social media to say thay had been told to evacuate as a precaution.

One man said: “Never seen a fire this big before.”

And yet a third said: “Denton fire is getting bigger.”

Another woman in Droylsden, three miles from the fire, posted a photo of a piece of ash which she said had fallen from the sky.

She shared a second photos showing buge plumes of black smoke trailing across the sky.

Several roads in the area have been closed while emergency services deal with the incident.

Highways England said the eastbound carriageway of the M67 was closed.

Transport for Greater Manchester said some bus routes had been affected by the road closures caused by the fire.

This is a breaking news story… More to follow