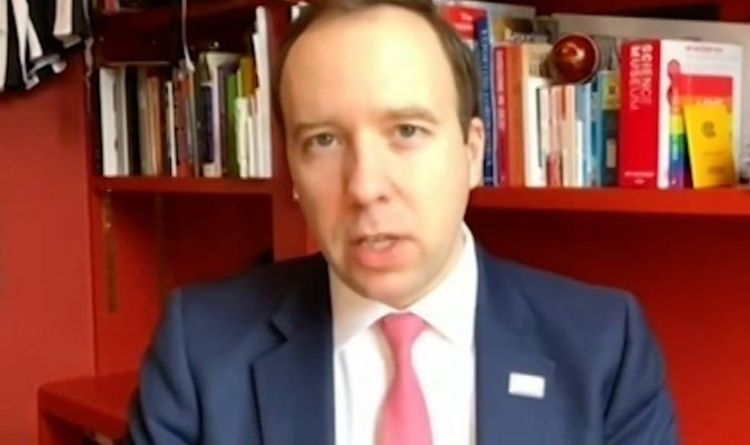 The Health Secretary appeared on Ridge on Sunday to dismiss calls for schoolteachers to receive a coronavirus jab in the next phase of vulnerable categories. Matt Hancock told Sky News viewers there was no strong evidence to suggest that staff working in schools were more at risk from coronavirus. Earlier on Saturday, the Prime Minister declared that the Government was now aiming to offer all adults in the UK their first Covid vaccine by the end of July.

Matt Hancock said: “There isn’t strong evidence that teachers are more likely to catch Covid then any other group.”

Earlier he had explained the order of priority had been bases on advice from the Joint Committee on Vaccinations and Immunisations.

He added: “They have set out the priority groups one to nine which includes those who are clinically most vulnerable and their carers and includes the over-50s going down the age range.

“They are currently considering after that what might be the best order in terms of clinical priority.”

The Labour Party have called on Boris Mr Johnson to prioritise key workers, such as teachers and police, officers during the next stage of the inoculation process.

Shadow health secretary Jonathan Ashworth said: “It’s perfectly reasonable for teachers, police officers and other key workers who haven’t been able to stay at home in the lockdown to ask when their turn will be.

“If Government aren’t going to prioritise by occupation in the next phase, they need to set out why.”

Mr Ashworth also called on the Government to ensure that people diagnosed with Covid received sufficient financial aide to encourage them to self-isolate at home.

The official said: “It’s clear at least tens of thousands of people are going to work knowing or thinking they might have Covid because they feel they can’t afford not to.”

In a statement on Saturday, announcing the new vaccine targets, the Prime Minister said: “Hitting 15 million vaccinations was a significant milestone – but there will be no let up, and I want to see the rollout go further and faster in the coming weeks.

“We will now aim to offer a jab to every adult by the end of July, helping us protect the most vulnerable sooner, and take further steps to ease some of the restrictions in place.”

The Government plans to publish its “roadmap” out of lockdown on Monday, paving the way to a return to some semblance of normal life.

Indian, Chinese military commanders are back at the LAC talks table...