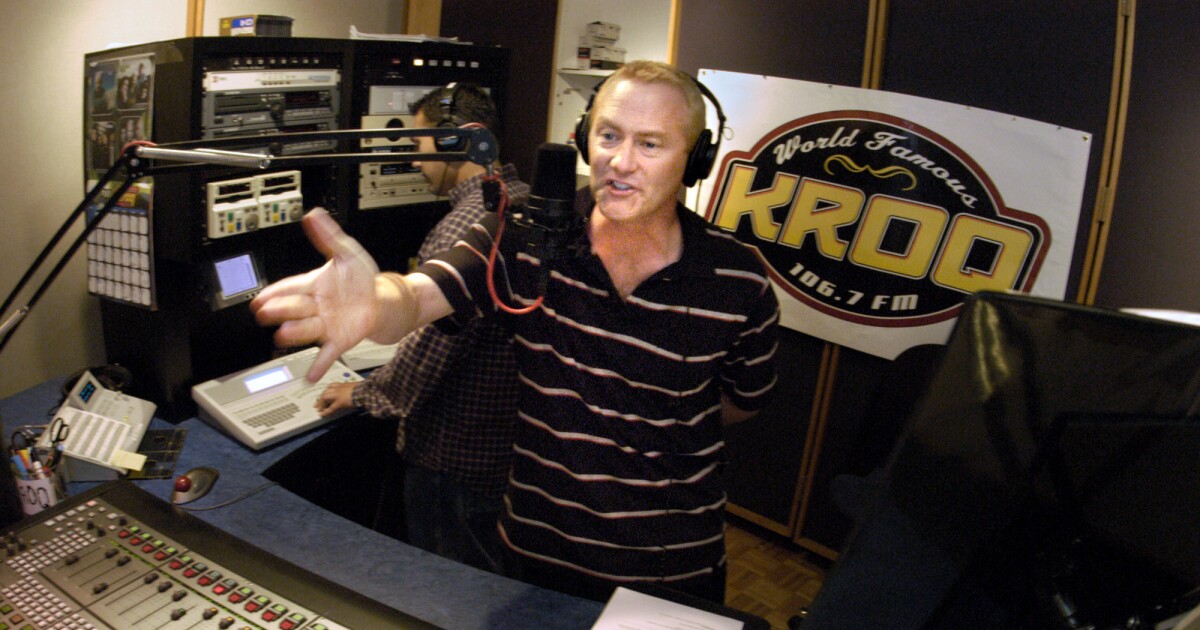 Ryder will team up with KLOS host Doug “Sluggo” Roberts for the new “Kevin & Sluggo” show airing weekdays during the afternoon drive shift. The new program, which he announced Tuesday during 95.5 KLOS’ “The Heidi and Frank Show,” will air from 3 to 7 p.m. Pacific. It debuts Thursday on the SoCal rock station and is being described as “Maxim meets Rolling Stone meets ESPN meets Comedy Central.”

The new gig follows Ryder’s March announcement that KROQ’s parent company Entercom had unceremoniously fired him and the whole “Kevin in the Morning With Allie & Jensen” team after he had been at the radio station for more than 30 years. (His longtime morning cohost Gene “Bean” Baxter retired from the station the year before and moved to London.) KROQ’s afternoon drive cohosts Ted Stryker and Kevin Klein were named as morning hosts shortly thereafter.

.@TheKevinRyder is joining the @955KLOS team to host a new show, “Kevin & Sluggo,” which will debut Thursday and air live each weekday, 3p-7p! Be sure to tune in!https://t.co/BfEjYRLaoX
•@SluggoDoug #KevinandSluggo #955KLOS #KevinRyder

“I’m happy KLOS has lowered their standards just enough for me to slip in,” Ryder said in a statement to The Times. “Everyone at the station, starting with Heidi and Frank in the morning, are having fun, and love the music they’re playing. I’m happy to be working in the afternoon, with my longtime friend Sluggo, because one of us needs to be able to use the English language sufficiently. Plus, I need my beauty sleep to remain at the top of the modeling game. I’m looking forward to reconnecting with listeners and having fun on the air in L.A. again!”

According to Variety, Roberts was one of the first people to call Ryder after he was let go from KROQ.

Ryder and Roberts, who is also known as Sluggo and Doug the Slug, have known each other for more than three decades. They previously worked at KROQ too. Roberts and Ryder also held gigs at Phoenix’s 40 KZZP in the 1980s: Roberts ran the board while Ryder and Gene “Bean” Baxter hosted the “Saturday Night Party Patrol.”

Roberts joined KLOS in summer 2019 as an assistant program director and music director.

The new show will be in addition to “Great News! With Kevin & Mike,” the daily talk show Ryder launched last month with Mike Catherwood. He will continue to produce that show on weekdays as both a YouTube video and podcast, Variety said.

“We’re doubling-down on ‘live and local’ with one of the very best in our craft,” said Otto Padron, Meruelo Media’s president and CEO, in the statement. “Bringing Kevin Ryder on-board was a no-brainer, as this is the type of bold and disruptive move that delivers compelling voices and relevant content to our very deserving listeners.”

“Great talent and content are king. If we’re not providing both, we’ll become irrelevant,” added Keith Cunningham, program director for KLOS. “Kevin is laugh-out-loud funny, an A-List content creator, hall of famer, this market loves him, and adding him to the team and partnering him with Sluggo completes what I consider to be the most powerful and entertaining on-air lineup in all of Southern California.”

How Green Are Electric Vehicles?

Finding the middle of nowhere: hiking to Scotland’s great wilderness