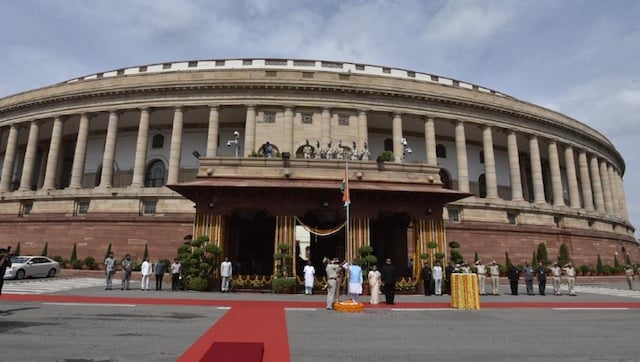 Parliament LIVE Updates: Four Opposition parties — DMK, CPI, AAP and Shiv Sena have given Suspension of Business Notice in Rajya Sabha under rule 267 over ‘the plight of protesting farmers in Delhi’

Parliament LATEST Updates: Four Opposition parties — DMK, CPI, AAP and Shiv Sena have given Suspension of Business Notice in Rajya Sabha under rule 267 over ‘the plight of protesting farmers in Delhi’, reported ANI.

Lok Sabha resumed normal functioning Monday after a week-long disruption over the three Central farm laws following an appeal by Defence Minister Rajnath Singh that it was a duty of every member to maintain the tradition of passing the Motion of Thanks to President’s address.

After the House convened at 5 pm, Singh said the tradition of thanking the President has been continuing for long and it should not be broken in a healthy democracy.

He also said that Rajya Sabha has already passed the Motion of Thanks after Prime Minister Narendra Modi’s reply and “I appeal to members not to break this tradition in the Lok Sabha”.

Singh said that members are free to speak on farm laws during the discussion on the Motion of Thanks.

Congress Leader Adhir Ranjan Chowdhury too said that this tradition has been continuing since 1921 and should not be broken.

“Our demand was to discuss the issue of farmers who have been sitting in the cold on the borders of Delhi in protest against farm laws. It is regrettable that they are being stopped from entering the capital by sharp nails and barbed wires,” he said referring to the reinforced barricading at the farmers’ protest sites.

Speaker Om Birla also appealed to the members to allow the House to function and not indulge in sloganeering.

The House was repeatedly disrupted by the Opposition members from 2 February over the three farm laws which was passed by Parliament in September last year.

Earlier Birla had called a meeting of leaders of different political parties to break the impasse in the House.

In the meeting, an agreement was reached to resume its normal functioning with Singh making an appeal to start the debate on President’s address.

Column: Trump saw himself as a strongman leader. He ended up...