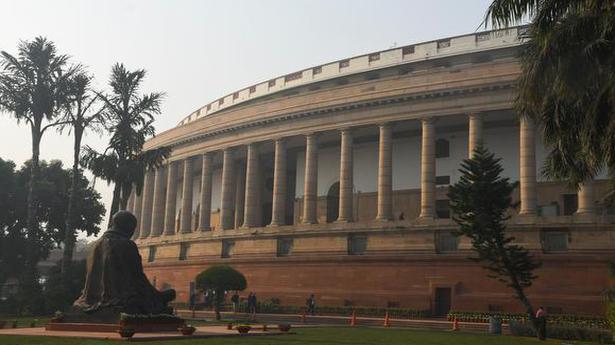 Members of the Lok Sabha will continue to participate in the motion of thanks to the President’s address. The House will take up The Arbitration and Conciliation (Amendment) Bill, 2021.

On Monday, replying to the debate on the motion of thanks to the President’s address in the Rajya Sabha, the Prime Minister said his government was still open to talks with farmers demanding a repeal of the three farm laws passed last September. He coined two terms —‘andolan jeevi’ (professional protesters) and ‘Foreign Destructive Ideology’ to lampoon the Opposition and certain protesters and foreign individuals who have tweeted in support of the farmers’ agitation.

The Lok Sabha extended its Monday’s sitting till 12 a.m. Tuesday. Another extended sitting of the House is likely today.

Here are the live updates:

Reports to be presented:

Reports of Committee on Estimates;

Reports of the Committee on Government Assurances;

Motion regarding the report of joint committee on the Personal Data Protection Bill, 2019- Extension of time

Motion of Thanks on the President’s Address

General discussion on the Union Budget

Bills for consideration and passing:

The Arbitration and Conciliation (Amendment) Bill, 2021.

Obituary references to the passing away of:

Reports to be presented:

Report of the Committee on Subordinate Legislation;

Reports of the Public Accounts Committee.

Bills for consideration and passing:

General discussion on the Union Budget

L.A. Unified is slated to get vaccines it needs in order to reopen elementary schools

Rule of six: The latest social distancing rules and exemptions