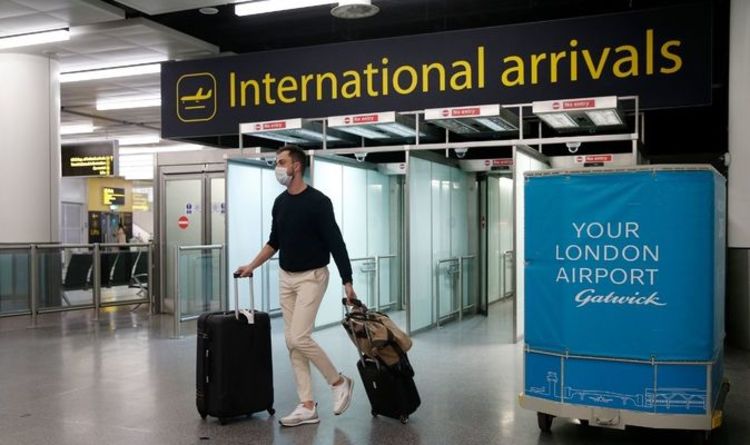 Matt Hancock, the health secretary, is set to reveal the details of the testing plan as part of ministers’ bid to prevent infected people from spreading the virus after touching down in Britain. He will unveil “enhanced” testing rules on Tuesday as the Government steps up the fight against new variants of Covid-19, according to reports.

Under the existing rules, everyone arriving in the UK must have tested negative for the virus within the previous 72 hours.

But the changes would mean each person would be tested twice for the virus during their 10-day quarantine.

The swabs would be administered on Day 2 and Day 8.

ITV News reported that the changes are expected to come into force on February 15.

The reports come after the Department of Health and Social Care previously confirmed the current testing regime would be enhanced “to cover all arrivals while they isolate”.

On Monday a further 333 people were confirmed to have died in the UK within 28 days of testing positive for Covid-19, according to Government data.

Separate figures published by the UK’s statistics agencies for deaths where Covid-19 has been mentioned on the death certificate, together with additional data on deaths that have occurred in recent days, show there have now been 130,000 deaths involving Covid-19 in the UK.

On Monday the Prime Minister said he felt “very confident” in the coronavirus vaccines after concerns were raised that the Oxford/AstraZeneca jab may be less effective against the South African variant.

While he did not rule out the strain could delay the relaxation of lockdown restrictions, he insisted he has “no doubt that vaccines generally are going to offer a way out”.

Experts warned on Monday it is “very possible” the strain is already quite widespread in the UK.

The warning came on the back of a study of around 2,000 people that suggested the Oxford jab only offers minimal protection against mild disease of the South Africa variant.

The research, due to the young age of participants, could not conclude whether the vaccine worked against severe disease.

Some 147 cases of the South African variant have so far been identified in the UK.

Health experts are warning these are likely to be the “tip of the iceberg” due to the fact they are the result of random checks on 5 percent to 10 percent of all positive tests.

The Government’s full “road map” for exiting the third national shutdown is set to be released in two weeks’ time.

Schools are not expected to reopen until March at the very earliest.

Challenges; Will RCB become Royal? The Kohli-Rohit fight will...