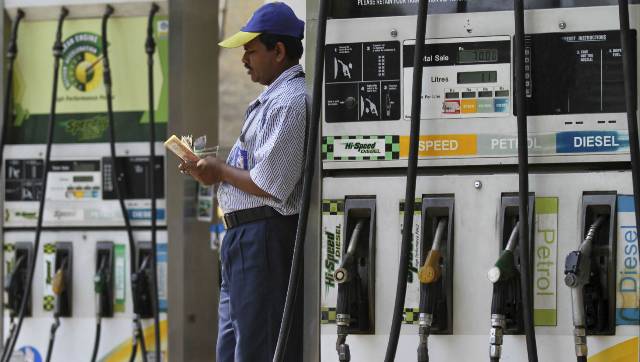 In Delhi, the price of petrol climbed to Rs 88.73 per litre and diesel soared to Rs 79.06, the official notification said

New Delhi: Petrol price crossed Rs 99 a litre in Rajasthan on Sunday while diesel topped Rs 91, after rates were increased for the sixth day in a row. Petrol price was increased by 29 paise per litre and diesel by 32 paise, according to a price notification of state-owned fuel retailers.

This pushed retail rates, which differ from state to state depending on incidence of local sales tax or VAT and freight charges, to their highest level.

In Delhi, petrol climbed to Rs 88.73 a litre and diesel soared to Rs 79.06, the notification showed. Rajasthan, which levies the highest VAT on fuel in the country, had the highest petrol and diesel prices.

In Sriganganagar town of the state, petrol soared to Rs 99.29 and diesel jumped to Rs 91.17 per litre.

The Rajasthan government had late last month cut VAT on petrol and diesel by 2 percent. Despite this, the state has the highest VAT at 36 percent plus Rs 1,500 per kilolitre road cess on petrol. On diesel, the state levies 26 percent and Rs 1,750 per kl road cess.

Branded or premium petrol at Sriganganagar was priced at Rs 102.07 a litre and similar grade diesel at Rs 94.83.

Octane number is a measure of the ignition quality of fuel — higher the number, the less susceptible is the fuel to ”knocking” when burnt in a standard engine.

In Mumbai, regular petrol price soared to its highest ever level of Rs 95.21 and that of diesel rose to Rs 86.04. Premium or branded petrol in the city comes for Rs 97.99 and same grade diesel for Rs 89.27 a litre.

In six straight days, prices have gone up by Rs 1.80 per litre for petrol and Rs 1.88 for diesel.

The relentless hike in prices has been criticised by the opposition parties including Congress that has demanded an immediate cut in taxes to ease the burden on the common man.

However, Oil Minister Dharmendra Pradhan last week had told Parliament that the government is not considering a reduction in excise duty to cool rates from their record highs.

vaccines, he had said.

Central and state taxes make up for over 61 per cent of the retail selling price of petrol and about 56 per cent of diesel.

The union government levies Rs 32.9 per litre of excise duty on petrol and Rs 31.80 a litre on diesel.

Retail petrol rates have risen by Rs 19.16 per litre since mid-March 2020, after the government raised taxes by a record margin to mop up gains arising from fall in international oil prices. Diesel rates have gone up by Rs 16.77.

Perimenopause can begin as early as your thirties, here’s what you should know…

‘Muted Inside, Loud Outside’: Navjot Singh Sidhu’s Bid to Stay a Stiff Challenger to Captain