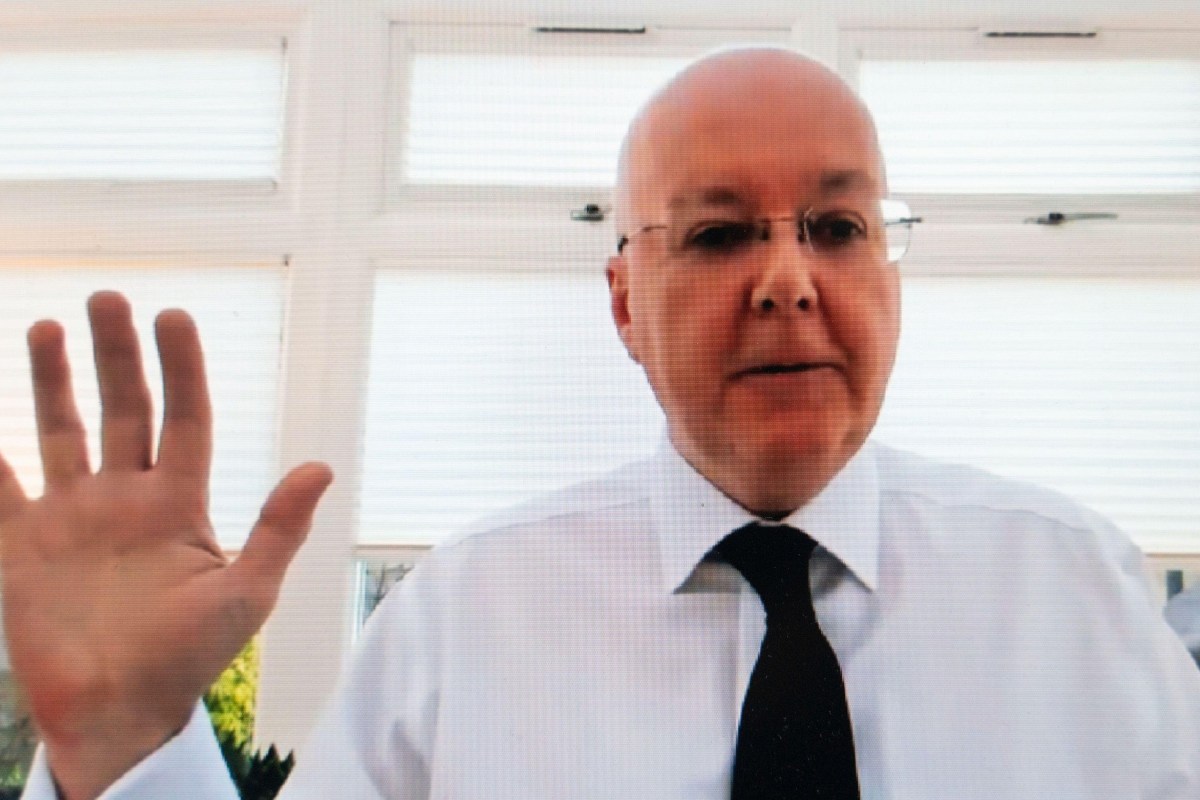 NICOLA Sturgeon’s husband has bizarrely told Holyrood’s Alex Salmond inquiry he was looking at magpies when asked if anyone else was “in the room” with him at a virtual appearance.

In tense scenes at the committee, SNP chief exec Peter Murrell denied lying under oath about a 2018 meeting at his home between Ms Sturgeon and Mr Salmond – while he was also accused of being “obstructive” to the inquiry’s work.

Mr Murrell stated he “absolutely refutes” any claim he committed perjury at his first session before the inquiry in December which led to him being recalled.

But his second appearance, held virtually over Zoom, was later blasted by opposition MSPs as a “dismal and shifty performance” full of “obstruction and obfuscation”.

And Labour interim leader Jackie Baillie renewed her call for a Crown Office probe into whether Mr Murrell has committed perjury.

In exchanges with Mr Murrell during the session, Ms Baillie had asked why he kept looking to the left of the camera.

She asked: “Is there anybody in the room with you?”

The SNP chief denied there was and jokingly asked if this was a suggestion of a conspiracy, offering to show her the room he was in.

He added: “There’s a magpie. Actually, there’s two of them.”

Mr Murrell was also challenged on differing accounts he gave at his first appearance about the April 2, 2018 meeting where his wife the First Minister first claims she heard of harassment complaints against her predecessor – directly from Mr Salmond.

In his first session on December 8 last year, Mr Murrell stated he was “not at home” during this meeting but later said he had “arrived home not long before the meeting ended”.

In another suggested contradiction, he said at first he was “not really aware” Mr Salmond was coming to his house, then later stated he knew about it the day before.

Conservative Murdo Fraser said: “When you told me, in response to my question, giving evidence to me under oath, that you were not at home during the meeting, and when you told me you were not really aware that Mr Salmond was coming to the house, were you giving us false information?”

Mr Murrell replied: “No. Because I wasn’t aware that the meeting was for a purpose. I just thought he [Mr Salmond] was popping in for a chat about any matter.”

The Tory MSP, a former lawyer, said it was “self-evident” Mr Murrell had made an “untruthful statement to this committee” – which he warned was an offence that could result in jail time of up to five years.

Mr Murrell interjected: “I don’t think so. I wasn’t at the meeting.”

Mr Fraser then blasted Mr Murrell over his evidence, saying it had not helped the inquiry “one little bit”.

Mr Murrell was further quizzed on the existence of text messages between himself and other top Nats officials concerning complaints against Mr Salmond, something he had said did not exist in his first evidence session.

Ms Baillie asked the SNP boss whether he stood by his position there were no other text messages, to which he replied: “You asked whether there was any relevant information and there wasn’t and there still isn’t.”

The Labour MSP responded: “He made no such caveats to his evidence previously and I think this is becoming quite obstructive to the work of the committee.”

He was also asked whether he recognised a message he allegedly sent on January 29, 2019 which expressed dissatisfaction that a party official was “not being forceful enough to achieve the objective” of having someone make a police statement against Mr Salmond

In response, Mr Murrell stated: “There was no conspiracy… there is a danger in pulling information from social media, selectively quoting information, leaking and false allegations.

“That is not the context of that message and again we’re drifting into an area where we are invading the privacy of someone we know already we have caused a great amount of stress to.”

It came as SNP chief operating officer Sue Ruddick broke her silence about her involvement in the messages in a statement which coincided with Mr Murrell’s evidence.

In her first public statement on the issue, Ms Ruddick claimed she had “reported an act of physical aggression by Mr Salmond” to the police.

She said she was concerned the committee would seek the production of further texts and accused it of being “determined to ignore complainers’ privacy rights”.

Echoing Mr Murrell’s evidence, she said her privacy had been repeatedly breached in recent months through “selective quoting, leaks and false allegations” about the messages by Mr Salmond and his allies intended to “bolster his reputation”.

But speaking after the committee meeting, Ms Baillie said Mr Murrell had “effectively conceded that there were other text messages”.

She went on: “When faced with the charge that he may have misled the committee, Mr Murrell replies glibly and seemingly without understanding the gravity of the offence. This obstruction and obfuscation is simply unacceptable.”

Renewing her call for the Crown Office to “fully investigate” if Mr Murrell committed perjury before the inquiry, the Labour MSP added: “Misleading a committee of the Scottish Parliament is tantamount to attempting to mislead the people of Scotland: for that Mr Murrell must be held to account.”

VACC TO THE FUTURE

There are NO deals with hotels for quarantine, Govt admits as 200k set to arrive

“Instead he tied himself in knots again, further undermining the FM’s credibility. And then he started talking about the magpies in his garden.”

Mr Fraser commented for the Tories: “Mr Murrell seems incapable of giving a straight answer. His dismal and shifty performance was a masterclass in evasion.

“What was particularly craven was the attempt to use the female complainers as human shields to deflect the committee from getting the answers the public deserves.”