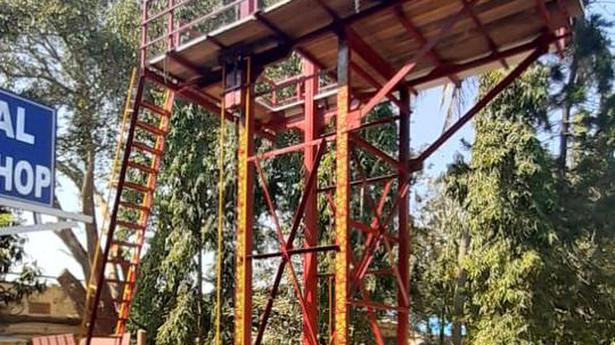 The century-old carriage-cum-lift of Sri Chamundeshwari Temple, which was used to place the idol in the elevated seat in the temple chariot has been renovated by the Central Workshop of South Western Railways, Mysuru Division.

A press statement said the carriage-cum-lift was in a dilapidated condition, but the original drawings of the lift were not available for any work to be taken up. The Chamundeshwari Temple administration including its chief priest and Mysuru Lok Sabha MP Pratap Simha approached the General Manager of South Western Railway in October last year and sought its help.

After receiving instructions from the headequarters, the Central workshop of South Western Railway in Mysuru took up the work and renovated the lift. The cradle-lifting mechanism was provided with locking and anti-fall arrangement. A new ladder with anti-skid plates and hand rail were also provided, the press statement said.

The manually-operated crane weighs between 5-6 tonnes and is 5.5 metres high and has a capacity to lift 300 kg, the statement added.

600-mile reunion: Cat from Houston area reunited with owners after being found in Northwest Arkansas

Manatee Deaths Are Spiking In Florida