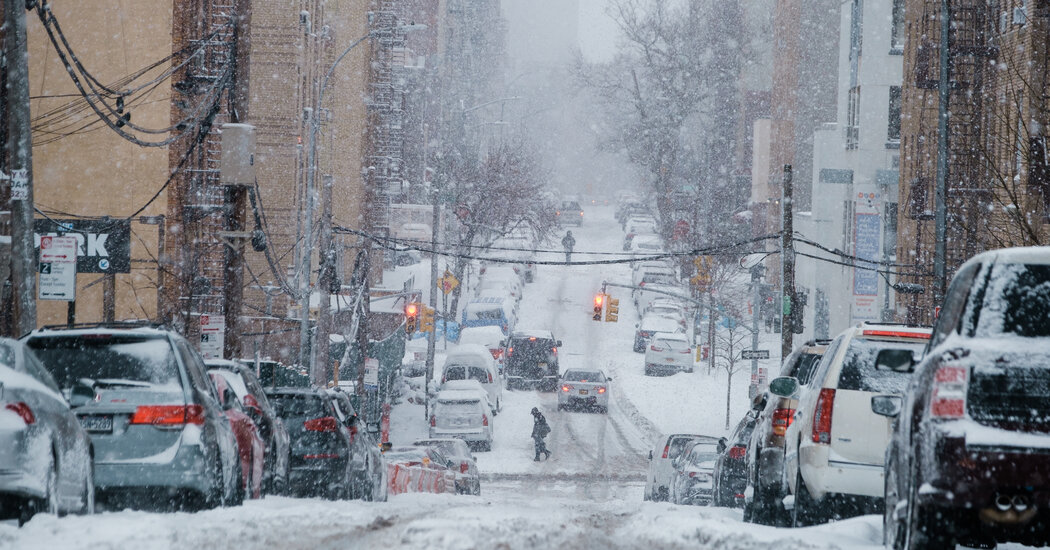 The New York City area took a pounding from the latest nor’easter, with predictions of snow depths that have only grown in recent days.

The National Weather Prediction Center warned of “heavy snow and strong winds from Pennsylvania to Maine through Tuesday. Near blizzard conditions are possible along the coast, and some places may receive up to 2 feet of snow.

Greg Carbin, the chief of forecast operations for the center, said in an interview that precise predictions of how deep the snow will get were difficult, since the storm could draw warmer air off the Atlantic Ocean, bringing in a measure of sleet or freezing rain that would “tend to tamp down the overall accumulation.”

The result may appear to be less snow, but it ends up being a damp, heavier mess that can mean backbreaking labor for anyone wielding a shovel. Thus, he said, “it’s usually a good idea to approach any kind of forecast in a probabilistic sense,” with a range that doesn’t focus too sharply on possible maximum inches.

Judah Cohen, director of seasonal forecasting at Atmospheric and Environmental Research, a company that provides information to clients about weather and climate-related risk noted that New York City tends to draw more attention when it suffers a severe storm. “If the bull’s-eye is over Central Park, it’ll be in the history books. If it’s over the Delaware Water Gap, OK, but no one’s going to be writing books about it.”

It is winter, of course, and such storms have always been a part of winter in the Northeast. But there is evidence that a warming world is influencing the severity of winter storms even as it is making winters somewhat milder overall. Dr. Cohen pointed to the Arctic, which is warming much faster than the rest of the planet, and the phenomena of the disrupted polar vortex, which can be triggered by blasts of sudden warming in the stratosphere.

Together, the two kinds of warming are a potent combination, he said. “The general warming of the Arctic, that’s kind of like the gasoline. When you get the polar vortex, that’s the match.”