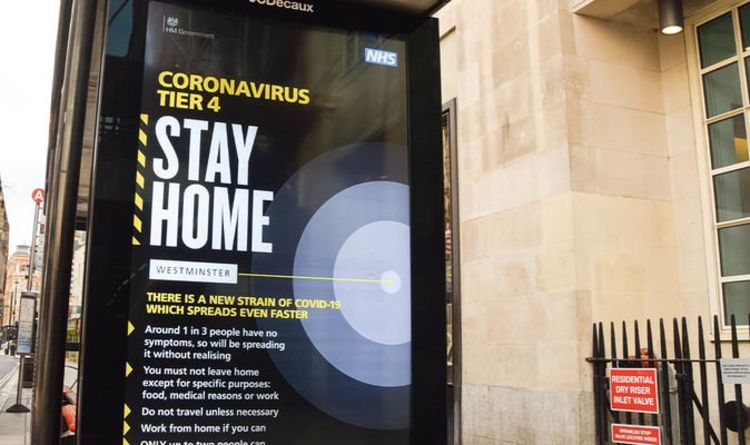 Tier 4 rules mean that non-essential shops, hairdressers, leisure and entertainment venues must close. Household mixing indoors is banned, and you are advised only to leave your home for a list of permitted reasons. Some 43 percent of the country is currently under these harshest of restrictions but a Whitehall source has told Express.co.uk that further curbs could be coming any day now as Covid cases continue to soar.

The senior Whitehall source warned England could see new measures, “adding another level onto Tier 4, so like a Tier 5.”

They added: “We are ruling nothing out, the new strain is of serious concern. Tier 4 appears to not be strong enough.”

But Dr Katherine Henderson, the president of the Royal College of Emergency Medicine, said there will be a lag before we feel the benefit of the Tier 4 restrictions.

She told BBC Breakfast: “We will hope to start seeing the benefits in London of the Tier 4 restrictions and transmission rates but there is a big lag. All the people we are seeing at the moment were infected two weeks ago.”

READ MORE: Is there a Tier 5? Could Boris install even harsher lockdown measures?

Mr Johnson has warned the new variant has led to “very considerable new pressure” and did not rule out the potential for a third national lockdown while speaking at a press conference on Christmas Eve.

He said: “We believe that we’re going to have to get through this tough period now with, as I have said many times, very tough restrictions, with tough tiering.

“As much as I regret that, I do think it is necessary for us to drive this virus now to stop it running out of control in January.

“We need to buy ourselves time to get the vaccine into as many arms of the elderly and vulnerable as we can.”

However experts have told the Prime Minister a lockdown similar to the one in November would not be enough to stem the rising tide of Covid cases.

Cabinet Office minister Michael Gove today said the Government is still set on keeping schools opening, saying: “We do keep things under review, and we’ll be talking to head teachers and teachers in the next 24, 48 hours just to make sure that our plans… are really robust.

“It is our intention to make sure we can get children back to school as early as possible. But we all know that there are trade-offs.

“As a country we have decided – and I think this is the right thing to do – that we prioritise children returning to school.

“But we have a new strain and it is also the case that we have also had, albeit in a very limited way, Christmas mixing, so we do have to remain vigilant.”

Tory backbenchers are also believed to have told the Prime Minister that keeping schools open is a price that should be paid even if it increases the R number.

When is the next tier review in the UK?

The Government will conduct the next review into the tier system on December 30.

The Gov.UK website says: “The next formal review of tiering decisions will take place by 30 December. The government keeps the data under constant review and will take immediate action to protect local communities.”

However, as seen in the last week, the tiers can be changed before this.

The last review was supposed to be held on December 16, but London, Kent and some other parts of the south east were put under Tier 3 ahead of this announcement.

These areas were then upgraded to Tier 4 just a few days later. And a couple of days after this, more areas were added to the Tier 4 list by Matt Hancock, who cited the worsening situation as prompting such action.

So while the next official review is this Wednesday, an announcement could easily be made today or tomorrow instead.

The Man Who Sold His Skin steals show

Battling the Mob, a Black Officer Came Face to Face With Racism

Kelsey Grammer ‘Gleefully’ Confirms A ‘Frasier’ Reboot Is In The Works

Chief says Capitol response not based on race

Maharashtra: 10,000 FYJC hopefuls without seats even after fifth round |...

Today in History for January 25th