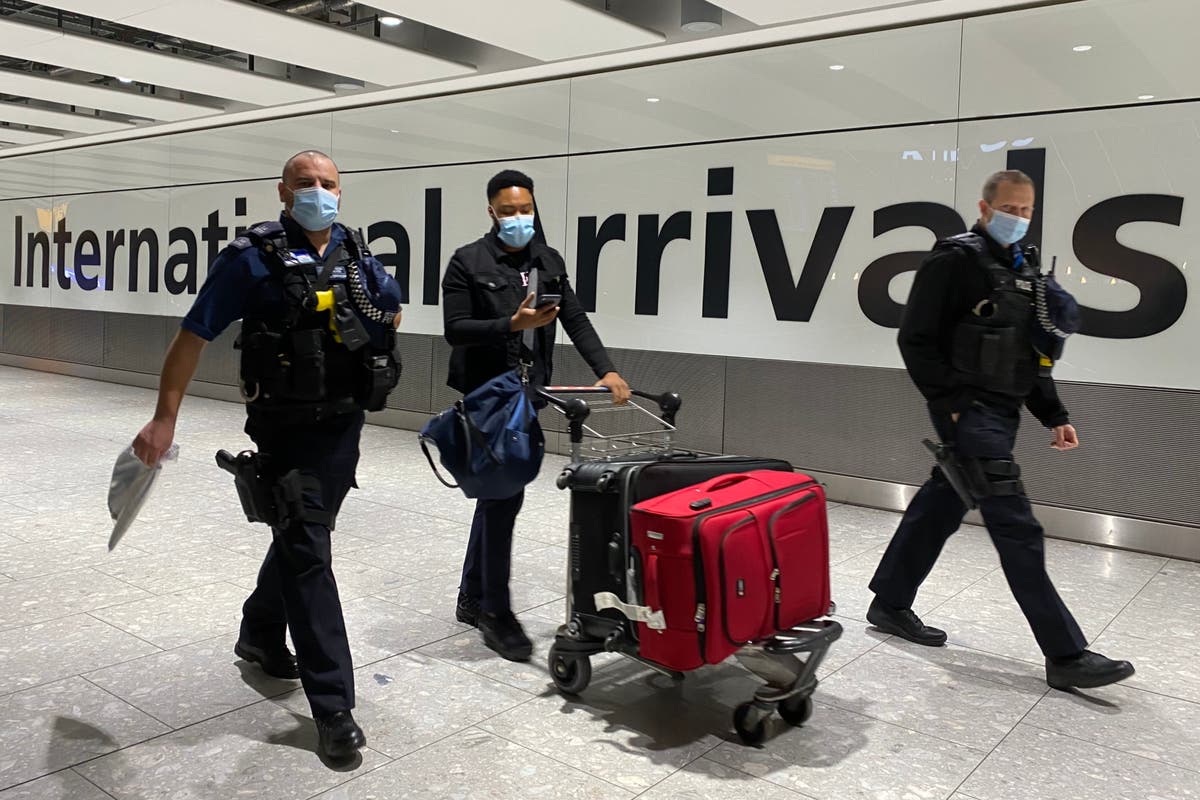 ll travellers arriving in the UK will need to undergo two coronavirus tests while they quarantine under plans set to be announced by the Government.

Under the new measures, it is expected travellers will have to take tests after two and eight days into their 10-day quarantine period.

It follows the announcement last week that from February 15, UK nationals returning from high risk “red list” destinations will have to quarantine in hotels where they will have to take two tests.

Boris Johnson has insisted the nation will be “relying very much on border controls” to protect against new strains, but that they will be “most effective” when infection rates are brought down.

His comments came as Downing Street admitted that no formal contracts have been awarded to hotels for arrivals from “red list” countries to quarantine in.

The policy is due to be introduced in England on February 15.

A DHSC spokesman said: “Enhancing our testing regime to cover all arrivals while they isolate will provide a further level of protection and enable us to better track any new cases which might be brought into the country, and give us even more opportunities to detect new variants.”

It comes after Prime Minister Mr Johnson said he was “very confident” in the vaccines being used in the UK.

He said the mutation did not appear to have a “transmissibility advantage” over the variant first identified in Kent, which has spread across the UK, and was therefore unlikely to “overrun” it.

Professor Van-Tam stressed that it was important to take a jab if offered it now, to protect against the “clear and present danger” posed by the virus currently circulating in the UK, rather than wait for an updated vaccine that might be more effective against the South African variant which is only present in small numbers.

But at a Downing Street press conference he suggested that it was “very much on our radar” that booster shots in the autumn may be required for new variants, in a similar way to seasonal flu vaccines.

If coronavirus could – like flu – become an illness that is “manageable in the community”, with the most vulnerable protected by vaccines, “we open up a whole way of living normally, much more normally, again in the future”.

The Prime Minister, speaking during a visit to a coronavirus test manufacturer in Derby, did not rule out the possibility of the South African strain delaying the relaxation of lockdown restrictions, but insisted he has “no doubt that vaccines generally are going to offer a way out”.

Experts warned on Monday it is “very possible” the strain is already quite widespread in the UK, after a study of about 2,000 people suggested the Oxford jab only offers minimal protection against mild disease of the South Africa variant.

The study, due to the young age of participants, could not conclude whether the vaccine worked against severe disease.

Some 147 cases of the South African variant have so far been identified in the UK, with experts warning these are likely to be the “tip of the iceberg” due to the fact they are the result of random checks on 5 per cent to 10 per cent of all positive tests.

The Prime Minister told reporters: “We’re very confident in all the vaccines that we’re using.

“And I think it’s important for people to bear in mind that all of them, we think, are effective in delivering a high degree of protection against serious illness and death, which is the most important thing.”

Although Professor Van-Tam sought to calm nerves about the South African strain, experts fear it may be more widespread than official figures indicate.

Dr Mike Tildesley, a member of the Scientific Pandemic Influenza Group on Modelling (Spi-M), said “surge testing” currently taking place must be effective to stop the strain proliferating in the UK, but when asked if it may already be quite widespread, he told the BBC: “It’s very possible.”

Stephen Evans, a professor at the London School of Hygiene and Tropical Medicine, said he was “reasonably confident” that current vaccines would protect against serious disease from the variant.

But he told BBC Radio 4’s The World At One programme that the number of cases of the strain was “probably here in dramatically more numbers” than had been identified so far.

The variant accounts for about 90 per cent of new coronavirus cases in South Africa, which has put its rollout of the Oxford/AstraZeneca vaccine on hold.

Professor Salim Abdool Karim, the head of South Africa’s ministerial advisory committee on Covid-19, told Today: “What the study results really tell us is that, in a relatively young age group demographic – with very low prevalence of morbidities such as hypertension and diabetes etc – the vaccine does not protect against mild to moderate infection.”

The professor told Times Radio he does not know if the Oxford/AstraZeneca vaccine will be effective in “preventing severe disease”.

For the first time since 1943, the Army-Navy football game will...