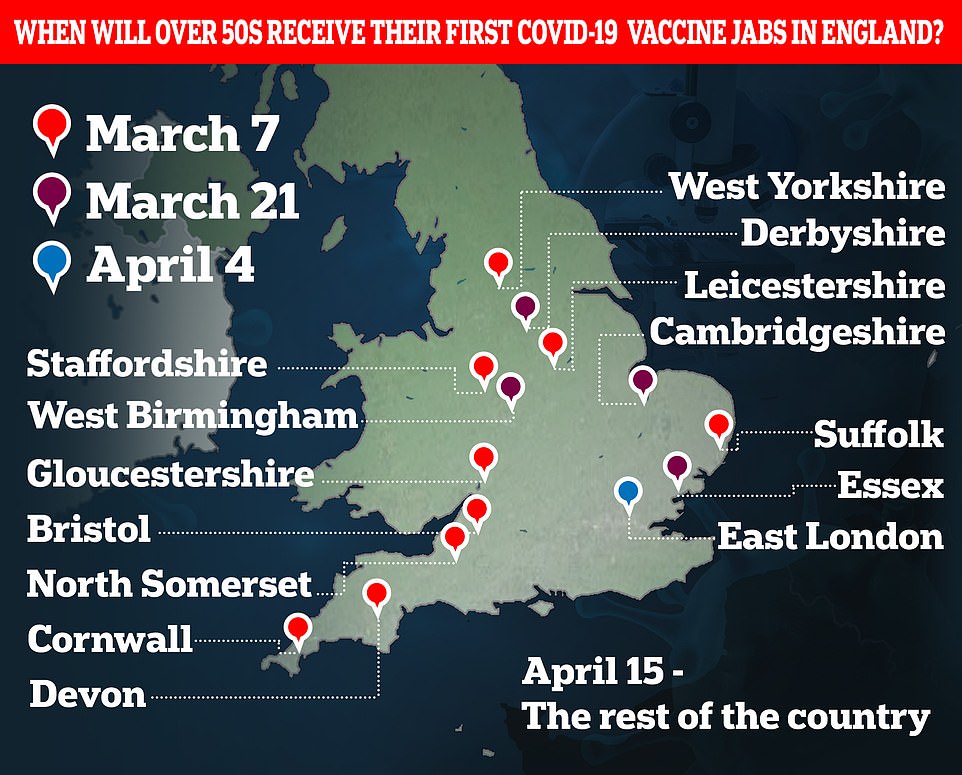 Covid-19 infection rates have continued to dropwith 9,834 more coronavirus cases announced – a fall of 10 per cent on last week – while the 215 new daily deaths brought Britain’s total up to 120,580.

Falling infections will spark hope that the end of lockdown is nearing as Boris Johnson prepares to announce a roadmap out of restrictive measures tomorrow.

Last Sunday Britain recorded 10,972 Covid cases and 258 deaths. Both figures have fallen this week, by 10 per cent and 16 per cent respectively.

Today’s figures mean Britain has recorded 4,115,509 positve Covid-19 tests since the start of the pandemic.

Earlier today Matt Hancock revealed a third of people over 16 had now been given at least one dose of the Covid-19 vaccine.

Mr Hancock confirmed this morning that every adult in the country will be offered at least one dose of a Covid vaccine by the end of July.

The Government previously said it hoped to reach all those aged 18 and over by the autumn, but Mr Johnson aims to greatly accelerate the successful campaign.

In other news today:

Boris Johnson and his senior ministers met this afternoon to finalise his roapmap for getting the nation out of lockdown before it is unveiled to the public tomorrow.

Senior Cabinet figures joined the Prime Minister on a call to hammer out the last details of the plan that will shape the next few months in England.

Mr Johnson and top ministers including Health Secretary Matt Hancock and Chancellor Rishi Sunak will meet to sign off the final details, with the wider Cabinet rubber-stamping the plan tomorrow morning.

The Prime Minister will then present the roadmap to the Commons before addressing the nation in a televised press conference in the afternoon.

The long-awaited move will provide some certainty for a county that has been wilting since the new year under its third lockdown in a year.It is expected that children will return to school on March 8, just two weeks’ time, with further measures in the following weeks and months.

Speaking to Times Radio Matt Hancock said coronavirus restrictions will be eased with ‘weeks between the steps’, suggesting that after schools reopen there may be few other changes before April.

Mr Hancock also said social distancing measures and the wearing of face coverings is likely to remain for a while.

Asked earlier bout the speed of the lockdown lifting, he told Sky’s Ridge on Sunday: ‘It is right to be cautious, it is incredibly important. There are still almost 20,000 people in the hospital with Covid right now. Almost 20,000.

‘The vaccination programme whilst clearly going very well, will take time to be able to reach all people who have significant vulnerability, especially because we also need to get the second jab to everybody.

‘So we have got time that needs to be taken to get this right, the PM will set out the roadmap tomorrow and he will set out the full details, taking into account that we need to take a cautious but irreversible approach, that’s the goal.’

What are the UK priority groups for vaccinations?

2. All those 80 years of age and over and frontline health and social care workers

4. All those 70 years of age and over and clinically extremely vulnerable individuals (not including pregnant women and those under 16 years of age)

10. Rest of the population

Mr Hancock’s comments came as surge testing was carried out in Brentwood, Essex, where a single case of the South African mutant Covid strain was found.

Surge testing comprises of increased testing (including door-to-door testing in some areas) and enhanced contact tracing in specific locations.

Surge testing has now been deployed in the CM13 postcode in Brentwood after the South African coronavirus strain was found.

Essex is one of 14 regions in England that could themselves ahead of schedule when vaccinating the over 50s.

Nine areas across the UK will have vaccinated all of their over 50s by March 8 – almost a month ahead of schedule, according to new figures.

Vaccine roll-outs in the West of England appear to be leading the way, with Gloucestershire, Bristol, Devon, North Somerset and Cornwall all on course to have delivered their first jab to over 50s by the end of the first week in March.

Analysis from the Telegraph has identified the trusts that are set to be dishing out doses by early March.

Cambridgeshire, West Birmingham, Derbyshire and Essex is expected to have their first round of doses for over 50s completed by March 21, while East London’s health care partnership may reach the target by the first week of April.

NHS Chief Executive Sir Simon Stevens said today: ‘The NHS COVID vaccination campaign continues full steam ahead – letters inviting everyone aged 65 to 69 went out a week ago, and already over two thirds of them have had their first COVID vaccination.

‘Across England overall nearly a third of adults have now had their first jab, and early signs suggest this is contributing to the welcome fall in coronavirus hospitalisation that we’re now seeing.’

The Prime Minister will temper news of the turbo-charged vaccination programme with a ‘cautious and phased’ route out of lockdown tomorrow.

All pupils will return to school on March 8 – a planned backed by Labour leader Keir Starmer this morning – and care home residents in England will each be allowed one regular visitor.

By Easter, at the start of April, two households will be allowed to meet up outside. That will be followed shortly afterwards by the reopening of non-essential shops and pubs and restaurants for outdoor service only. 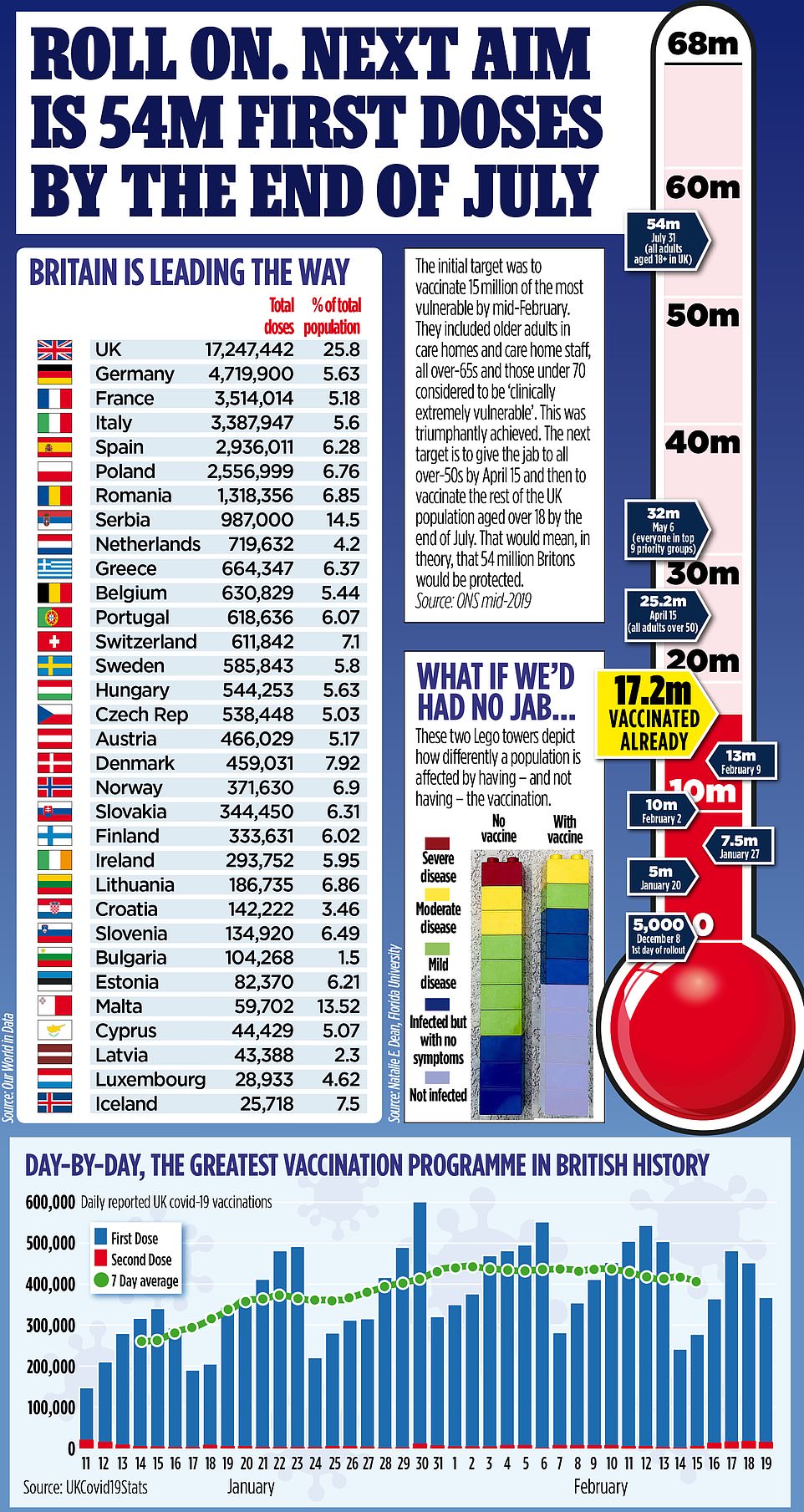 The hospitality industry is expected to reopen fully in May.

However, former Tory chief whip Mark Harper, who leads the Covid Recovery Group, this morning repeated his call for all restrictions be lifted by the end of April, once the most vulnerable groups had been vaccinated under the new timetable.

Mr Johnson  is due to announce the three-point plan that will see schools draft in private tutors and pay teachers to extend their working day in order to make up some of the hours lost in the classroom, The Sunday Times reports.

An additional ‘Covid premium’ will be awarded to schools for every disadvantaged pupil they have at their institution.

The plan for summer school, which was drawn up by the newly appointed education recovery commissioner Sir Kevan Collins, will see pupils enjoy sports and physical education in the morning before sitting down at the desk – due to fears that a lack of activity could affect students’ mental health and academic success, the publication reports.

A source told The Sunday Times: ‘This is not just education support but also social support. We are acutely aware that pupils’ mental health has been impacted by not seeing friends or playing sport.’

More details of the catch-up scheme are set to be announced by the Prime Minister tomorrow.

Myanmar ambassador to the UK is barricaded inside his Hampstead home