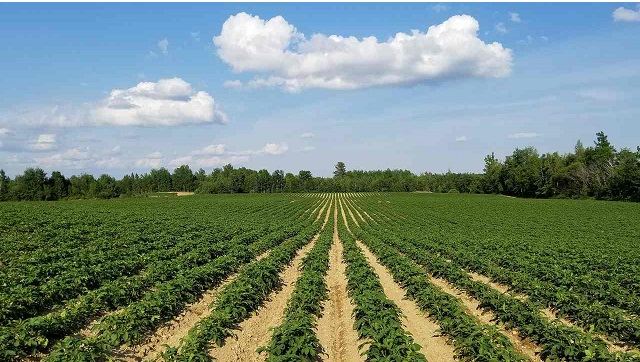 Finance Minister Nirmala Sitharaman said her Budget rested on six pillars and one of the goals was to double farmers’ income. But there was little in her Budget speech to change the direction of agriculture, which not only needs to be market-oriented and competitive but also environmentally benign and resilient to climate stresses.

There has been acute under-spending in some of the centrally-sponsored schemes. The micro-irrigation programme utilised only 65 percent of the budget allocation. The Rashtriya Krishi Vikas Yojana, which promotes horticulture, has used up 69 percent of funds. It’s possible that the lockdown and the slow opening up thereafter disrupted the implementation of the schemes.

The Ministry of Fisheries, Animal Husbandry and Dairy gets 34 percent more than this year’s revised estimate at Rs 1,220 cr. There is a much-needed emphasis on the development of fisheries including harbours and landing points.

Innovation in the Budget is the imposition of a cess on select imports to create an agriculture infrastructure fund. It will be of Rs 900 crore. The cess will be imposed on gold and silver (2.5 percent), apples (35 percent), liquor (100 percent), crude palm oil (17.5 percent), crude soy and sunflower oils (20 percent), gold and silver (2.5 percent) and petrol and diesel. This will be in addition to basic customs duty. Some of the money will be used to improve infrastructure in the regulated mandis, which will be impacted by one of the three central laws that prohibits the mandis from charging a market fee on agri-trade outside their physical limits. The mandis cess was levied by states.

The agri-infrastructure is a central levy. Being a cess it will not be shared with the states. Isn’t it better to charge a fee from the users of mandis than impose a tax on imports? The finance minister said consumers will not be hurt because basic customs duties on these items will be lowered. But cesses have a habit of creeping on more items.

The ongoing farmers’ protests on the borders of Delhi cast a shadow on the Budget. The finance minister was at pains to emphasise that the Narendra Modi government had doubled the spending on wheat procurement and nearly tripled that on rice procurement since it assumed office in 2014. She said there was a big increase in the number of beneficiaries but did not provide comparable figures for beneficiaries under the UPA government.

The reports of the Commission on Agricultural Costs and Prices-which fixes the support prices at which procurement is done-do not show a big increase in the share of the procurement of rice (to take one commodity) as a percentage of production. Between the three years ending in 2013-14 and the three years ending in 2018-19 the share has increased by two percentage points. The spending on procurement however has vastly increased because cereal production itself has grown and so have the support prices.

The finance minister’s claims on procurement contradict the stated intention of enacting the three central laws, which is to make agriculture demand-driven and market-oriented. Farmers sell to the government when support prices are higher than market prices. This is the reason why the protesting farmers of Punjab, Haryana and western Uttar Pradesh want procurement of wheat and rice at support prices to be legally guaranteed. They don’t want to face market uncertainties. But this will make the cultivation of rice and wheat unsustainable. The finance minister should have announced a crop diversification fund for these states. It is an important miss.

The writer is a senior journalist

Cypress mom of 5 in coma after family, including newborn, contracts COVID-19

Arsenal vs Tottenham: WSL team news and how to watch today’s...