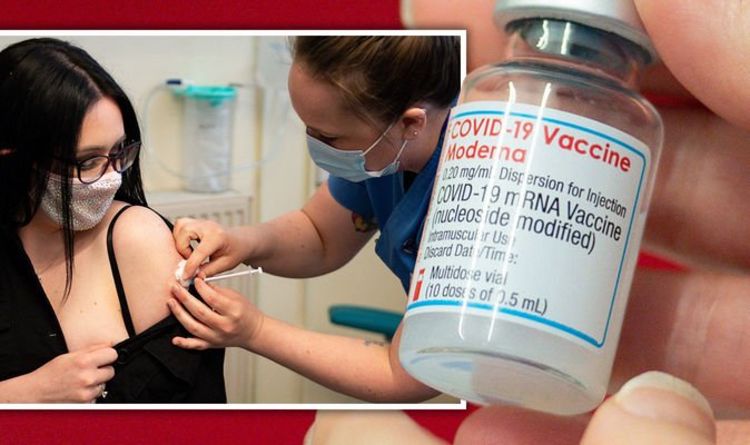 The Moderna vaccine is the third in the UK’s coronavirus vaccine rollout, alongside Oxford-AstraZeneca and Pfizer-BioNTech. The rollout has begun in Wales, will move to Scotland next and England is expected to begin using the jab later in April.

Research has shown the Moderna vaccine is effective against the Californian variant spreading in the US.

There is also evidence the jab works against the Kent variant, the UK’s dominant virus mutation.

The research, carried out by Duke University and published in The New England Journal of Medicine, showed antibodies were successful in triggering immune responses against the variants.

However, another study in the Journal of the American Medical Association (JAMA), carried out by the Centre for Disease Control (CDS) shows that after the first dose, people who received the Moderna jab were more likely to report side effects.

READ MORE: Moderna vaccine UK: Everything you need to know about new jab

The JAMA study showed 73.9 percent of Moderna recipients reported an injection site reaction, such as pain or redness, compared with 65.4 percent of people who received Pfizer.

Additionally, 51.7 percent of those given Moderna reported reactions such as headache, fever or chills compared to 48 percent of Pfizer recipients.

After the second dose, the side effects appeared even more notable.

A total of 81.9 percent of Moderna recipients reported a reaction at the injection site and 74.8 percent reported other side effects.

Comparatively, 68.6 percent of those given the second Pfizer jab reported injections site reactions and 64.2 percent had other symptoms.

Why more people report side effects from the Moderna jab is as yet unclear, but authorities are assuring the public they are usually mild and manageable, and should not be a deterrent to getting vaccinated.