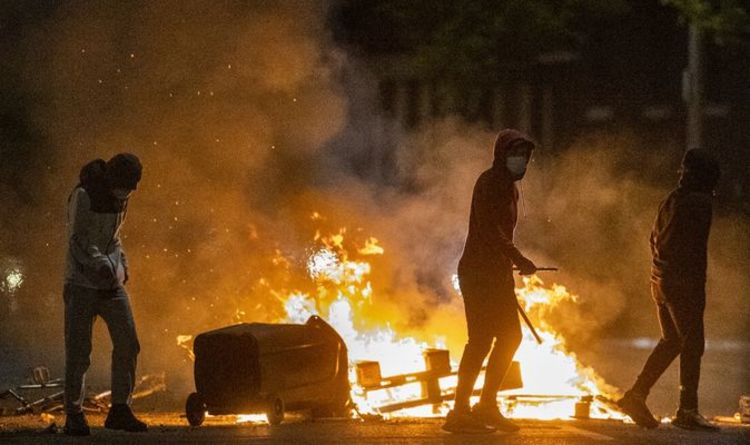 Northern Irish comedian Patrick Kielty triggered a backlash from certain quarters on social media after linking a famous Vote Leave stunt during the 2016 EU referendum to the violent scenes in Belfast last night. In a post on Twitter, the 50-year-old hit out at Boris Johnson’s reaction to the shocking scenes and suggested the “lies put on the side of a bus five years ago” was to blame.

The outburst appears to reference a red double-decker bus used by Brexiteers – including Mr Johnson – during the historic campaign.

The bus famously carried the slogan “we send the EU £350million a week let’s fund our NHS instead”.

Last night, more than 50 officers from the Police Service of Northern Ireland (PSNI) were injured in clashes in mainly loyalist areas.

Petrol bombs, bottles, masonry and fireworks were thrown during the scenes of violent disorder in west Belfast.

A bus driver also narrowly escaped death after thugs sent the vehicle up in flames.

He wrote: “I am deeply concerned by the scenes of violence in Northern Ireland, especially attacks on PSNI who are protecting the public and businesses, attacks on a bus driver and the assault of a journalist.

Responding to the Tweet, Mr Kielty said: “The lies put on the side of a bus five years ago almost cost a bus driver his life tonight.

“When are you going to start owning this mess?”

His attack on the Prime Minister and Brexit prompted an angry response by a number of users on the platform.

Responding to Mr Kielty, one user said: “Paddy you know better than that – this isn’t just about Brexit.

“Brexit is merely the smokescreen excuse for lawbreaking and homegrown terrorism.”

READ MORE: Brexit LIVE: Leave voters on ‘right side of history’ over coronavirus

The protocol came into force in January and has resulted in some issues in the flow of goods between Great Britain and Europe via Northern Ireland.

Northern Ireland Secretary Brandon Lewis will fly to Belfast to hold emergency talks with the main political parties as well as faith and community leaders to try and ease tensions in the region.

Laurence Fox hits back after he is sued for calling three...