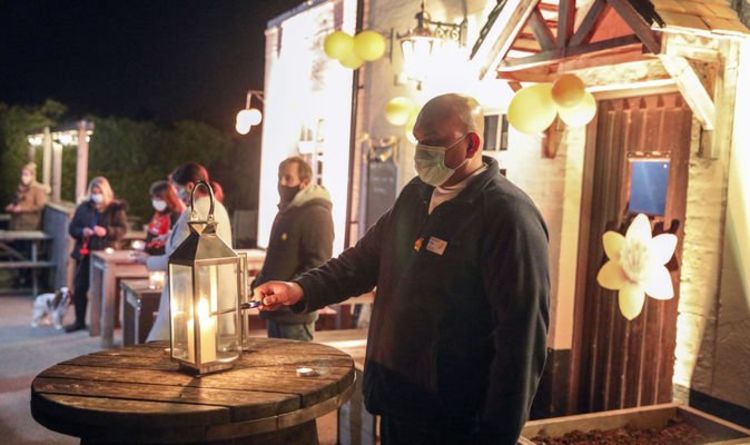 Residents lined the streets clutching candles and torches, or placed a light in their window, and buildings and trees were adorned with yellow ribbons and balloons. At St John the Evangelist Church, Rebecca Govier lit candles with her daughters Aubrey, seven, and Madison, four, in memory of their father who passed away in October. Dean Govier was diagnosed with bowel cancer and a secondary brain tumour in April 2019. After initial treatment, his tumours returned last February.

He spent a final summer making memories with his family before moving to a hospice, where he died on October 21 aged just 38.

Rebecca, 37, said: “People get a little bit busy and preoccupied with the small things like when they can get their hair cut next or when they can go to the pub.

“But for us, we know that life is too short. The most important things in your life are your family and your friends and being able to have time to reflect is so important.”

Dean was a much-loved photographer who owned a shop in the village and in November locals looked on as a small funeral party walked behind his hearse carrying rainbow-coloured umbrellas.

Rebecca added: “We’re not the only people going through this. Even in this small village I know a handful of people who are currently in our situation, preparing for loss. I’m thinking about them as well tonight.”

Outside the village pub the Old House at Home, a small group gathered for a socially distanced vigil.

Landlady Sam Barnett, 48, was part of a team who helped transform the village by handing out candles and decorations.

She said of the 8pm pause: “It was quite sombre because I lost my dad last May and my husband Andy lost his mum last year as well.

“For us it was really poignant and the fact that everyone was quiet and respected the minute’s silence – it was a lovely sight.”

He said: “It was great to be a part of this. Lighting a candle makes you remember the people who have lost their lives and their families.”

Earlier in the day, church services were held in Dormansland and neighbouring Lingfield where the names of 77 people known to have died in the two villages during the last year were read out.

Local vicar Ian Whitley said: “For us it’s been really important that people have been given an opportunity to acknowledge the loss over the last year.

“Everybody talks about a new normal. To move into that actually we’ve got to acknowledge the loss first.”