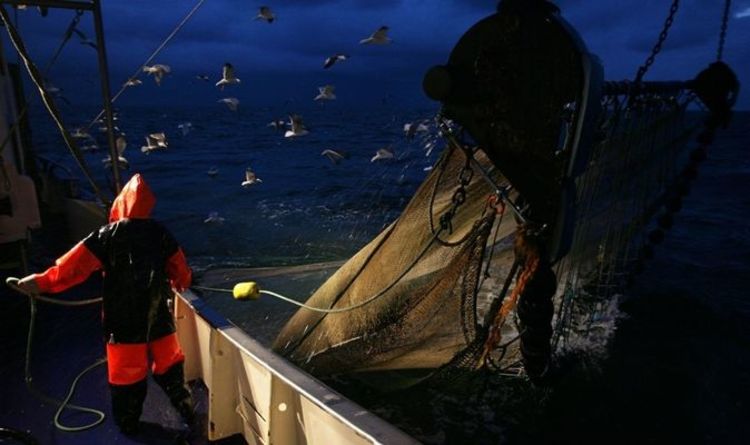 June Mummery lashed out at the Government for failing to protect the interests of the British fleet in the face of unfair competition from EU fishermen. Ms Mummery, a former Brexit Party MEP and founder of Renaissance of the East Anglian Fisheries (REAF), expressed her outrage as a tense row broke out between UK and EU fishermen over prawn fishing.

She tweeted: “Boris Johnson what on earth is going on? Our 186 coastal MPs – for God’s sakes do something!

“Protect our waters and Mother Nature before it’s too late.”

Another critic of the UK’s stance said: “The Government seem to be paying scant regard for UK fishing and allowing the EU to continue to plunder our waters at will.

“Unless they intervene, the EU boats will only cease when our waters are turned into wastelands.”

Scottish fishing chiefs have written to their Danish counterparts accusing EU fishermen of ignoring conservation rules and illegally fishing off the Shetlands.

They claim Danish multi-rig trawlers are using quad-rigs, which are banned by the Scottish Government, in the Fladen prawn grounds near Britain’s most northerly islands.

Multi-rig trawling can increase a fishing fleet’s catch by 80 percent but the method is condemned by conservationists.

This type of fishing has been banned in Scottish waters since 2007, but Danish skippers are blaming “confusing” Brexit rules for the misunderstandings.

He told The Fishing Daily: “These big Danish factory freezer trawlers have never fished here before, but we feel they are trying to steal the UK market and they could crash the prawn stock on the Fladen ground.

“We banned the use of more than the two-net multi-rig over ten years ago because it could flood the market with prawns and could increase the method of high-grading prawns to clear the hopper before the next haul.”

Mr Larsen stressed they looked “very critically” at what was going on with post-Brexit fishing rights.

He said in a letter: “It seems that the UK is undermining the fisheries agreement it has concluded with the EU.

“We have paid dearly for access to British waters, but the British are undermining access if they make such complicated and unreasonable rules that they are constantly changing.”

Discover your animal horoscope for Chinese New Year – and what...