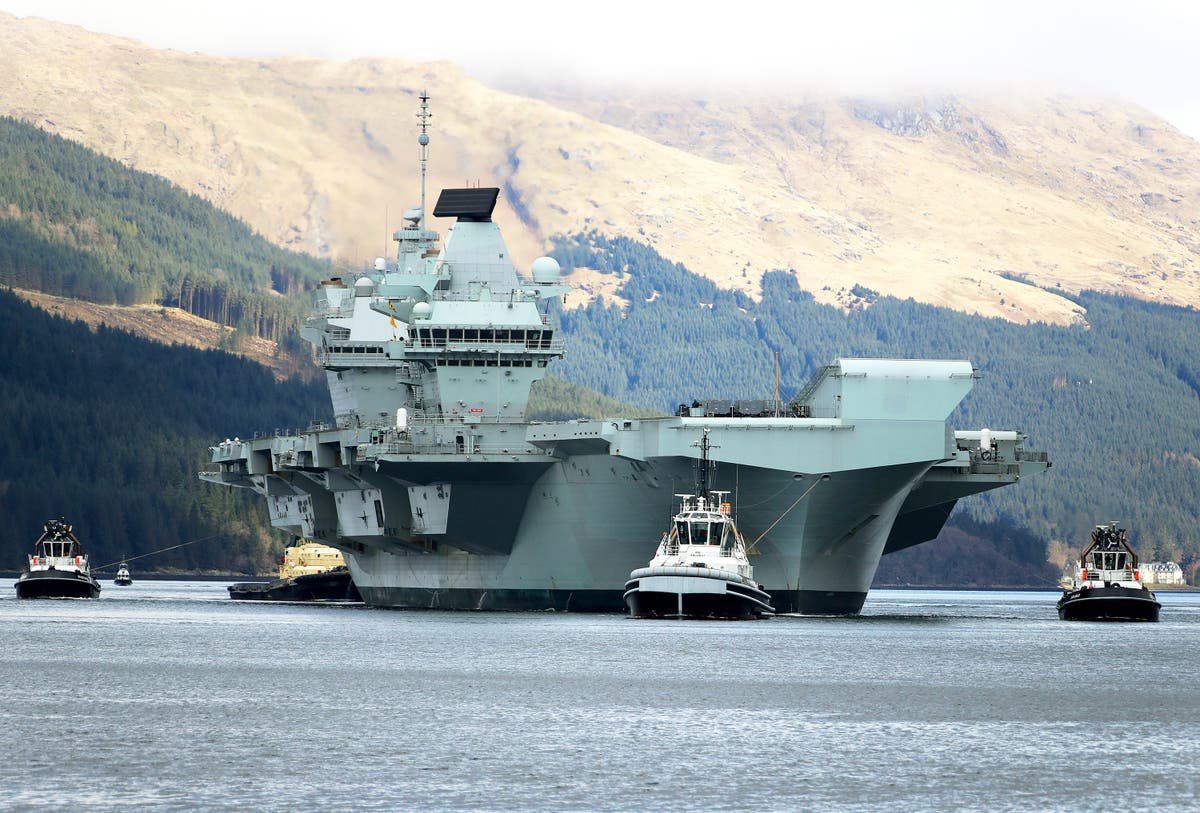 he decision to shift the UK’s foreign policy attention towards the Indo-Pacific and send an aircraft carrier into the region has been criticised by former defence chiefs.

The Prime Minister’s Integrated Review of security, defence, development and post-Brexit foreign policy last week outlined a “tilt” in focus towards the Indo-Pacific, in a move recognising the growing influence of China on the world stage.

The announcement was then followed by the defence command paper on Monday which announced that older tanks, ships and warplanes will be axed or phased out early, while the Army will have its overall strength reduced by around 10,000 as part of modernisation plans.

Lord Richards of Herstmonceux, who was chief of defence staff from 2010 to 2013, said he was worried that the cuts to the armed forces would mean the global ambitions laid out in the Integrated Review would go unfulfilled.

Giving evidence to the Commons Defence Committee, Lord Richards said: “Are our ambitions achievable given the amount as a country we are prepared to put into delivering on them? I fear the answer is not.”

He told MPs on Tuesday that he thought Britain should focus on strengthening its military influence in Europe and the Atlantic rather than stretch its “limited” forces to covering Asia as well.

“I’m worried that ‘global Britain’ – as much as I’m with it in principle as a patriotic chap – is not deliverable in defence terms,” said the former head of the armed forces.

“We ought to be centring our effort on Nato, on the Euro-Atlantic area – which are militarily deliverable and hugely strategically influential – and not risk heavy-packaging our more limited forces around the world, not necessarily gaining any extra influence because they haven’t got the sufficient mass in any particular place to gain that influence.”

Both Lord Richards and Lord Houghton of Richmond, who was chief of defence staff between 2014-16, questioned the decision to send aircraft carrier HMS Queen Elizabeth into the Indo-Pacific.

The 65,000 tonne carrier, capable of carrying up to 40 aircraft, will head to the Mediterranean, Indian Ocean and East Asia later this year as part of the UK’s Carrier Strike Group.

Despite the deployment, the Integrated Review called for a “positive trade and investment relationship” with Beijing in the run-up to 2030, ignoring lobbying from senior Tories for relations to be cooled.

Lord Richards said he was “not certain” that Britain should seek to “play a major role militarily” when it came to China and said there were “two contradictory goals – competition and co-operation” in the strategy document.

“We’ve got to come to terms with China and find a way of working with it and I’m not certain that sending the carrier strike group is going to be particularly helpful in that respect,” he told the committee.

Lord Houghton, who also appeared before MPs, said it would be “foolish to turn (China) into an enemy” and described it as a “beast you’ve got to accommodate, not declare war on”.

He added: “I absolutely agree that sending a carrier group is not necessarily the best way of seeking accommodation.”

Lord Houghton said he thought ministers had faced up to issue of the defence budget shortfall in its review.

But he said that would come with “very awkward public presentational issues for the Government” about the way it had slashed army and tank numbers.

“We can’t have it both ways,” he added. “This is something that is matching money to credible ambition, turning hollowed out forces into credible ones, but not at the same scale.

“It is attempting to balance the books – whether that survives contact with the next 10 years, I have no idea.”

The retired senior Army officer argued that Britain was losing its ability to engage in traditional land warfare, such as that seen in Iraq and Afghanistan in recent decades, due to the changes announced in the command paper.

“We appear to be reducing down to a one-shot, quite-long-notice, not-long-sustainment set of armed forces,” he told MPs.

“One of the things that looks like the result of this review – in terms of the numbers that have been reduced, in terms of straight-forward platforms and boots-on-ground – that we are less able to deploy to conflicts at scale.”

Film And Game Show On Rubik’s Cube In The Works

Canadians envious of US vaccination program