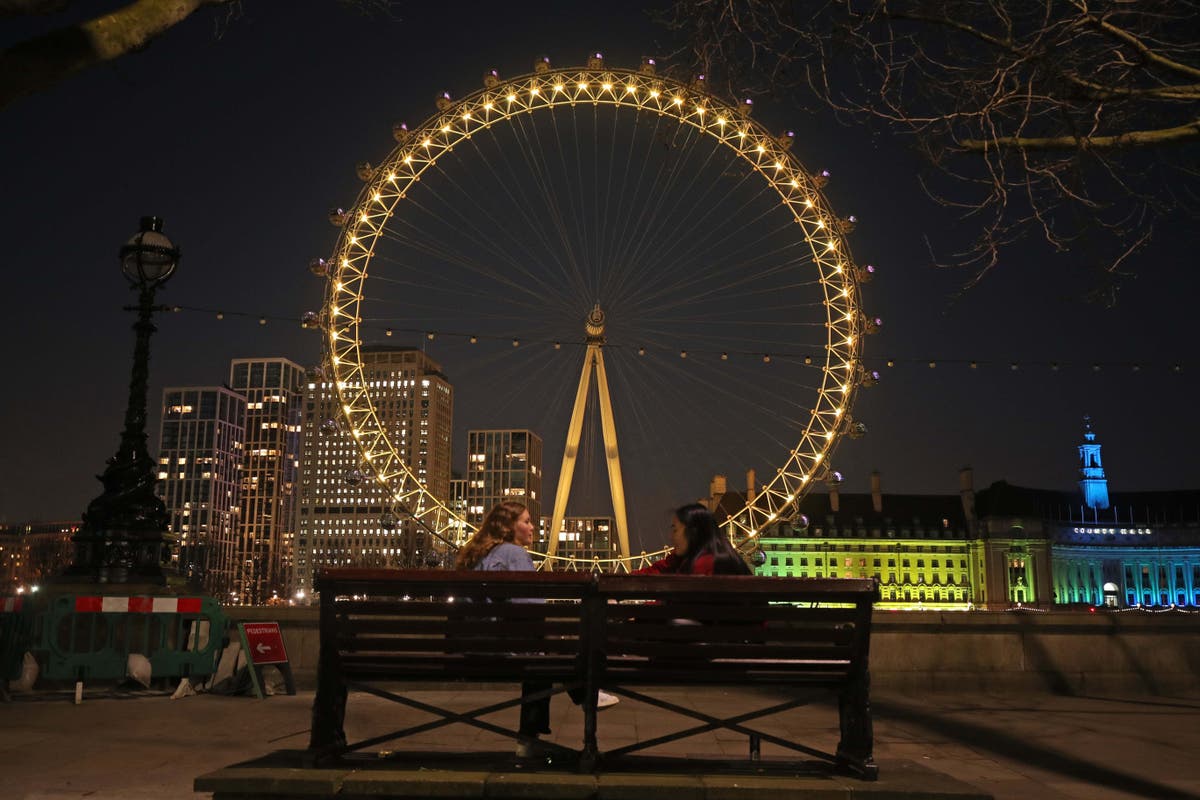 andmarks across the UK lit up on the anniversary of the first nation-wide lockdown to form a “beacon of remembrance” for those who died during the coronavirus pandemic.

More than 300 organisations, community groups and charities took part in a minute’s silence at noon on Tuesday in remembrance of those who have died during the Covid-19 crisis as part of a national day of reflection.

The event, organised by the end-of-life charity Marie Curie also encouraged people to stand on their doorsteps at 8pm with their phones, candles and torches to signify a “beacon of remembrance”.

Elsewhere, Liverpool Town Hall, Blackpool Tower and St Mary’s Lighthouse shone a light for those bereaved, alongside the Lincoln Cathedral.

Joining them were parliaments and assemblies in Wales, Scotland and Northern Ireland, as well as Cardiff’s University and City Hall, Belfast’s Titanic Building and City Hall, and Edinburgh’s St Andrew’s House.

Matthew Reed, chief executive of Marie Curie, said: “The emotional toll of the grief so many of us have faced, at a time when so few of us have been able to connect with friends, family and community in the ways we normally would, is immeasurable.

“The work of so many communities, to recognise the day, sent a strong message to those hit hardest by the death of a loved one – they are not alone.

“From neighbours shining a light on their doorstep at 8pm, to political leaders respecting the minute’s silence, our nation has shown a vital acknowledgement of the challenges bereaved people have been facing during this difficult year.”

He said the charity is committed to making the national day of reflection an annual event “to recognise the impact of bereavement for any cause”.

The nation paused at midday in remembrance of those who have died during the crisis as part of a national day of reflection, organised by the end-of-life charity Marie Curie.

The minute’s silence was observed by members of the public, health and care staff and politicians across the UK, with cathedrals and both Houses of Parliament falling silent. It was followed by a bell toll.

Members of the royal family also led tributes to commemorate the day.

The Queen reflected on the “grief and loss felt by so many” in a message accompanying flowers sent to St Bartholomew’s Hospital in the City of London where the Duke of Edinburgh had heart surgery.

The message read: “As we look forward to a brighter future together, today we pause to reflect on the grief and loss that continues to be felt by so many people and families, and pay tribute to the immeasurable service of those who have supported us all over the last year.”

The Duke and Duchess of Cambridge took part in a private moment of reflection in Westminster Abbey, observing the minute’s silence in the abbey’s Shrine of St Edward the Confessor.

William then lit a candle in remembrance at the altar of the Shrine, and Kate placed fresh daffodils next to the candle.

Lending his support to the national day of reflection, the Prince of Wales who is a patron of Marie Curie, said: “Whatever our faith or philosophy may be, let us take a moment together to remember those who have been lost, to give thanks for their lives, and to acknowledge the inexpressible pain of parting.

“In their memory, let us resolve to work for a future inspired by our highest values, that have been displayed so clearly by the people of this country through this most challenging of times.”

Prime Minister Boris Johnson who observed the minute’s silence privately, offered his “sincere condolences” to people bereaved during the pandemic.

He said: “Today, the anniversary of the first lockdown, is an opportunity to reflect on the past year – one of the most difficult in our country’s history.

“We should also remember the great spirit shown by our nation over this past year. We have all played our part, whether it’s working on the front line as a nurse or carer, working on vaccine development and supply, helping to get that jab into arms, home schooling your children, or just by staying at home to prevent the spread of the virus.”

According to the latest available data from the Office for National Statistics, there have been 629,623 deaths from all causes registered in England and Wales between March 21 2020 and the week ending March 12 2021.

The figures also show that, across the UK, 149,117 deaths have now occurred where Covid-19 was mentioned on the death certificate.

The Health Foundation calculates that those who died with Covid-19 have lost up to 10 years of life on average, with a total of up to 1.5 million potential years of life lost.

Dr Susan Hopkins, Public Health England strategic response director for Covid-19, said: “This virus has left no one untouched and it has been the most challenging time both personally and professionally that many of us have ever faced.

“I want to say thank you today to all the public health professionals and key workers who have worked long and difficult hours to help keep the country safe. The commitment you have shown is an inspiration to us all.”

Rachel Reeves, Labour’s shadow chancellor of the Duchy of Lancaster, said the party’s thoughts are with grieving families, adding that a public inquiry will be key to learning lessons from the pandemic.

The Archbishop of Canterbury Justin Welby said: “This day of reflection is an opportunity to pause and remember all that’s happened over the past year, to mourn those who have died but also to give thanks for those who have looked after us and our communities.

“It is a moment to pray together to our Father in Heaven to comfort us in our grief and to lead us into the hope of the risen Christ and the eternal life he promises.

“As we reflect on the pandemic, may He strengthen our resolve to rebuild a kinder, fairer and more compassionate society, may He be with those who are struggling and may He guide us in honouring those we have lost over the past year.”

This Morning’s Holly freaked out as guest ‘hugged by Marilyn Monroe’s...