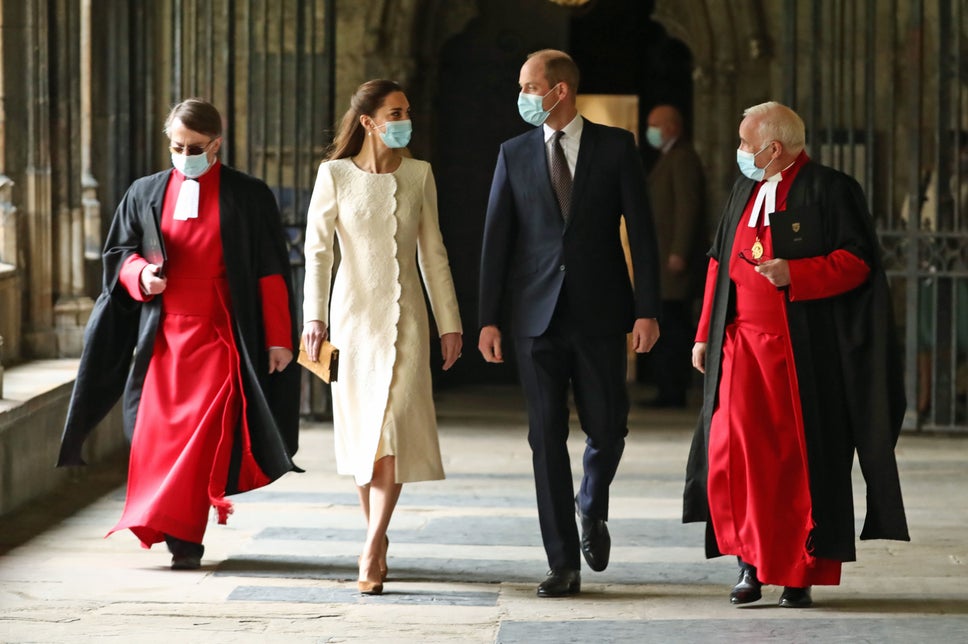 On the anniversary of the first national lockdown, William and Kate held a minute’s silence at midday in the abbey’s Shrine of St Edward the Confessor.

The Cambridges were joined by the Dean of Westminster the Very Reverend Dr David Hoyle and stood in silence before the Dean delivered a series of short prayers.

William then lit a candle in remembrance at the altar of the Shrine, and Kate placed fresh daffodils next to the candle.

The Shrine is where William and Kate privately signed their marriage register during their wedding ceremony – the 10th anniversary of which is next month.

The site of the tomb of St Edward, the founder of the abbey who died in 1066, is considered the spiritual heart of the abbey and is not on the normal tourist route.

The couple were visiting the Gothic church on Tuesday to tour its vaccination centre and to thank staff and volunteers.

In early March, the NHS opened the abbey clinic to provide up to 2,000 jabs each week to local Westminster residents.

Run by Chelsea and Westminster Hospital NHS Foundation Trust, the vaccination centre operates from the south transept, home to the Poets’ Corner.

Kate was dressed in a cream embroidered Catherine Walker coat, and William in a smart suit and tie.

Both the duke and duchess wore medical face coverings, with the duchess criss-crossing the ear loops, and William wearing them straight.

William told one vaccination team that he and Kate had not had their jabs yet.

“I’m a while away yet until I get mine. But you’re getting there pretty fast so it won’t be long,” he said.

He added: “I’ve had plenty of vaccinations in my time. I get jabbed a lot.”

It was the couple’s first visit to the abbey since they took part in the Commonwealth Day service in March last year for what was the Duke and Duchess of Sussex’s final public engagement as senior working royals.

The duchess asked Sandy Thwaites, a former nurse who came out of retirement to help with the rollout: “Is there much trepidation beforehand?”

Ms Thwaites said afterwards: “She asked if the public were finding it difficult, whether they were anxious.

“I said they are quite anxious, a lot of questions especially concerning clots.

“They come armed with quite a lot of questions. Some are crying, some are relieved, some are happy. But no-one has turned away.”

Dr Sheila Neogi, clinical lead for the abbey and a GP in Pimlico, said: “The duchess was very concerned and thoughtful about the staff, and the impact it has had on people.

“She said ‘It’s so nice that we are getting towards the end of this – you’ve all worked so hard’.”

Pippa Nightingale, chief nurse for north-west London, added: “They were very aware of the vaccine hesitancy, and how that might be more challenging in the younger age groups.”

Paola Totaro, a writer and volunteer with St John Ambulance, said William asked her who drew up the syringes, and he was told it was carried out by pharmacists in a small back room behind Poets’ Corner.