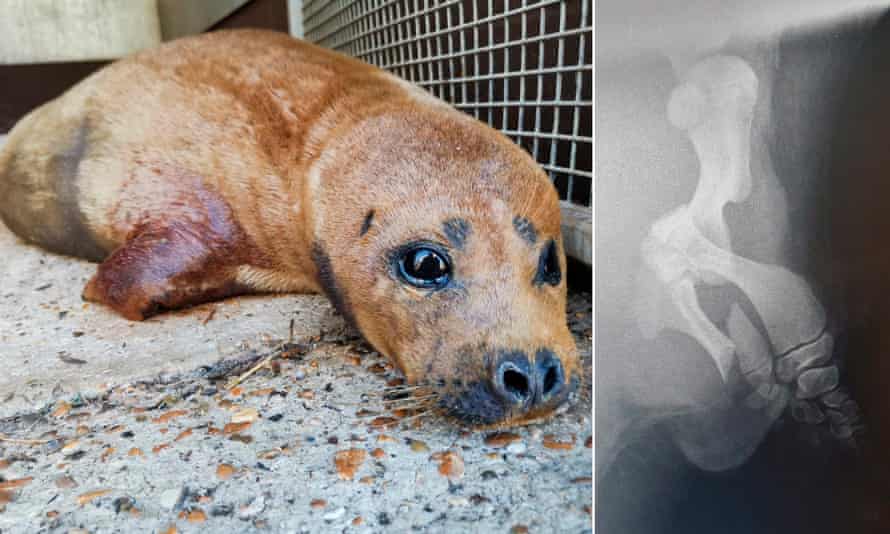 Freddie the seal, who has captured the hearts of Londoners since taking up residence near Hammersmith Bridge last month, is likely to be put down by vets after a dog attack left him with severe wounds.

Vets treating the beloved seal pup said the “only ethical and fair option we have is to end his suffering” after the vicious attack left him with a fractured flipper and an infected wound.

Since arriving upstream on the river a few weeks ago, the pup was nicknamed after Freddie Mercury for his entertaining antics. He was regularly spotted sunbathing on the bank at low tide to the delight of riverside walkers in Barnes, Teddington and Putney.

But the seal was mauled by a brown cross-breed dog as he basked along the Thames tow path on Sunday afternoon. Four passersby, among them a vet, rushed over to attempt to pry the dog’s jaws off Freddie and pull the dog away. The dog was recalled by its owner who reportedly then left the scene.

The onlookers stayed with 10-month-old Freddie until the emergency services arrived. British Divers Marine Life Rescue (BDMLR) medics treated his wounds before transporting him to the South Essex Wildlife Hospital (SEWH) in Tilbury by boat with help from the Port of London authority and London fire brigade.

Freddie gained public attention back in February when he was rescued from Teddington Lock after a fishing lure got caught in his mouth. After being released at the Isle of Sheppey, he soon returned to the Teddington and Twickenham stretch of the Thames where, until Sunday, he had been undisturbed.

A statement published by SEWH on Monday explained that, following X-rays the prognosis was “extremely poor” and Freddie would have to be put down. “Freddie’s flipper is fractured and the joint dislocated,” it said. “Seals do not take anaesthetic well as they have a dive reflex and don’t breathe.”

Vets tried to pin the fracture but the dislocation of the flipper could not be repaired. “The flipper is very swollen and despite antibiotics and pain relief the seal is clearly very uncomfortable and reluctant to eat,” the statement continued.

“We suspect the infection is spreading and with the other bite wounds to his body he is very miserable. At this stage we believe the only ethical and fair option we have is to end his suffering.”

The wildlife hospital said it was currently confirming the decision with experts from the BDMLR. The statement concluded: “We know this is a well-loved seal from the amazing response we have had to his story, but he is not the only seal we have had to care for that this has happened to. Please folks do not go near seals and always, always, keep dogs on leads and under control.”

An online fundraiser created by locals to thank the teams at the BDMLR has raised more than £4,000.

This news is auto generated from The Guardian using automated computer software. We are not editing or creating this story. Therefore the Site is not responsible for any of this content.

‘I’ve missed the gym and art galleries’: the big reopening in England

The play that changed my mind on assisted dying | Letters