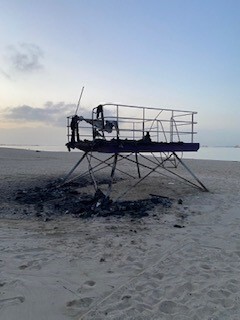 Firefighters who responded to the blaze just after midnight found the tower, which overlooked the shoreline near 12th Place, engulfed in flames. An investigation is underway, Long Beach Marine Safety Chief Gonzalo Medina said.

“The tower served as a symbol of our strong support for diversity within our ranks and the LGBTQ community who call Long Beach home,” Medina said. “The tower will be replaced and repainted by lifeguards.”

For years, Long Beach has been ranked by the nonprofit Human Rights Campaign Foundation as a top city for LGBTQ-friendly laws and policies.

Mayor Robert Garcia wrote on Twitter that he has little doubt the fire was an act of hate.

“To whoever committed this act, we will rebuild it better and brighter,” he wrote.

Last night, our PRIDE lifeguard station that was painted by LGBTQ+ lifeguards, burned down. The fire is under investigation but I personally have little doubt this was an act of hate. To whoever committed this act, we will rebuild it better and brighter. pic.twitter.com/VxNQZgCBpF