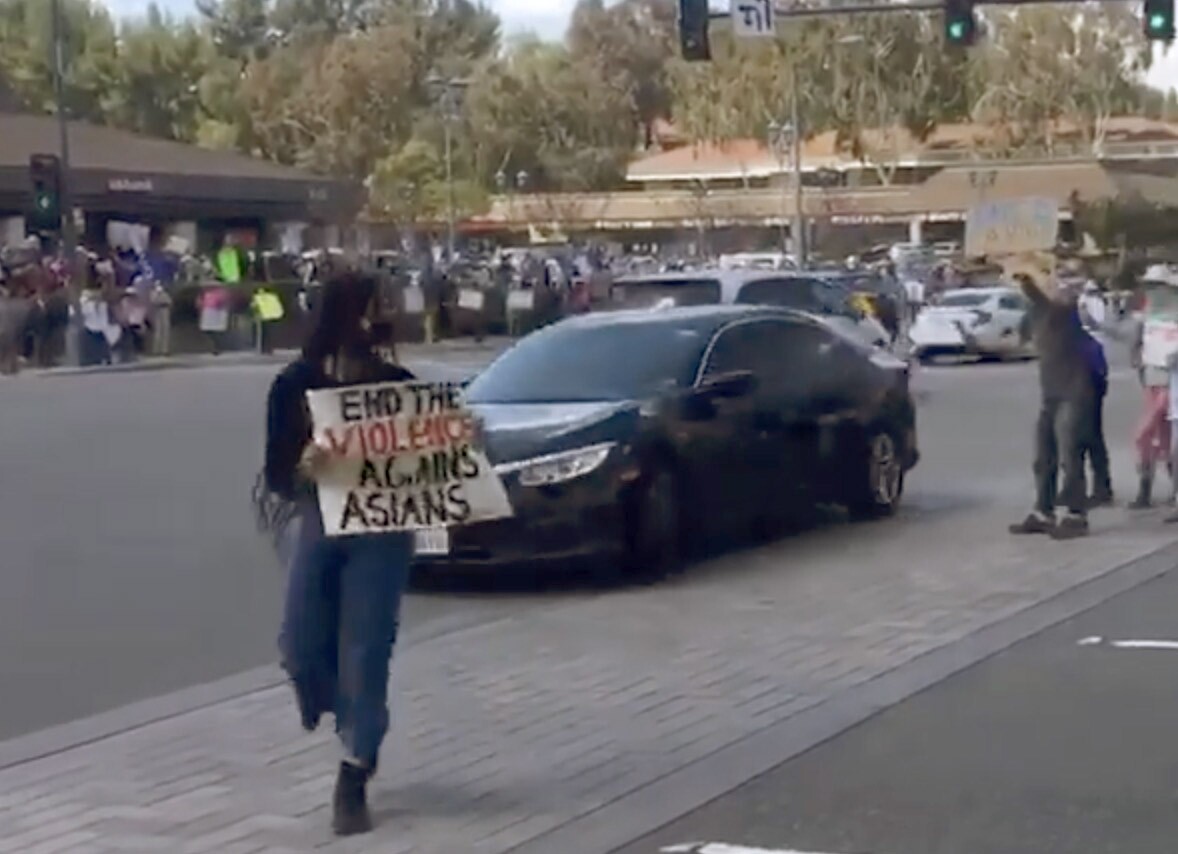 A man disrupted a protest against anti-Asian racism in Diamond Bar Sunday by driving through a group of protesters while yelling insults about China, triggering a law enforcement investigation.

Video posted to Instagram showed a black Honda Civic sitting at a stoplight at Grand Avenue and Diamond Bar Boulevard as about a dozen protesters crossed the street.

The driver then headed through an opening between the protestors and pulled a U-turn while yelling, “F — China!”

Another video showed the man, described by a sheriff’s official as a white man in his 50s, standing outside his car, waving his hand and repeating the slur. .

The official, Deputy Trina Schrader of the Los Angeles County Sheriff’s Information Bureau, said the department is investigating the man’s actions as a “hate incident,” rather than a crime, since there were no injuries or property damage.

Dozens of people gathered in Diamond Bar on Sunday with colorful signs bearing slogans like “Stop Asian Hate” and “End the Violence Against Asians.” The protest was one of several in Southern California that followed shootings by a white man at Atlanta-area spas last week that killed eight people, including six Asian women.

Although he is not Asian, Renold said he attended the protest to say “Enough is enough” to white supremacy, hatred and bigotry.

Most motorists honked in support of the protesters.

“There was just so much love and support in the air,” Renold said.

He did not witness the incident involving the Honda Civic driver but said it was “really disheartening and sad” that anyone would make racist comments at a rally against racism.

“I don’t understand how you can look at something like that and feel angry and feel like you’re being attacked,” he said.

The protest also addressed a wave of other attacks against Asian Americans that have escalated during the coronavirus pandemic, with some people blaming them for the virus because of its origins in China.

Last Thursday, a woman in Daly City became another victim in a string of violent attacks against Asian senior citizens in the Bay Area.

A security camera captured a person running up to the elderly woman, knocking her to the ground and grabbing her possessions before running away.

In the wake of the incident, Daly City residents organized a Stop Asian Hate protest Sunday.