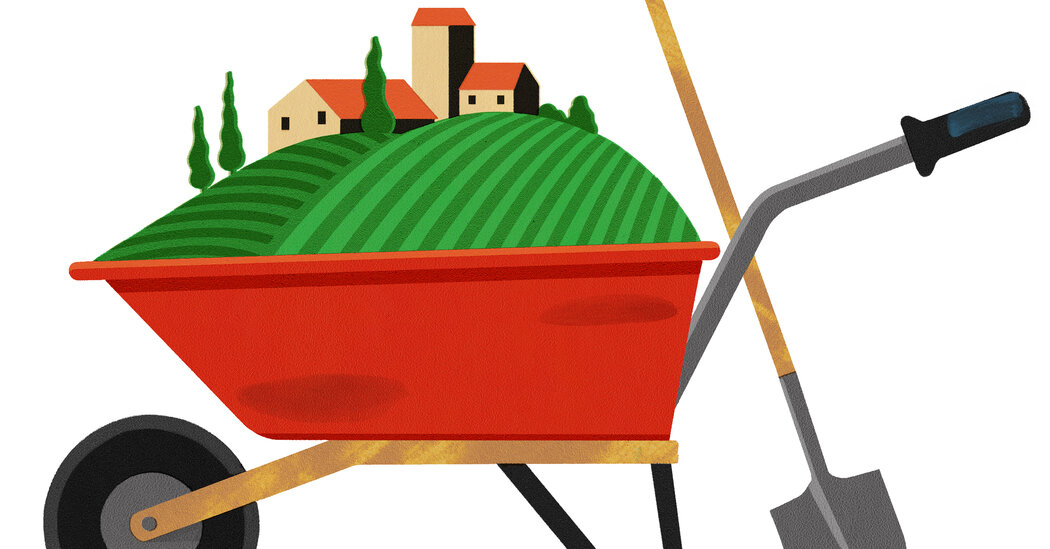 Francesco Citarda thinks the grapes in his Sicilian vineyard do more than produce excellent wine. In Alto Belice Corleonese, an area rived by the Mafia’s presence, Mr. Citarda says his co-op’s products can fight organized crime at its core.

He’s a founding member of La Placido Rizzotto Libera Terra co-op. It produces goods from its arable land, winery and olive groves — and runs an agritourismo, a farm that hosts tourists. And all of it is done on a lush 618-acre estate the government confiscated from the Mafia.

Set up in 2001, it was the first of nine co-ops of the network Libera Terra (Freed Land). The network shares know-how and resources among its co-ops and now employs about 170 people.

The co-op members rehabilitated the land and properties that were left to spoil after the government took them from the Mafia. They made links to local people and secured credit to ultimately establish a range of productive outputs. And they’ve done it knowing the Mafia is suspected of regularly intimidating and attacking other such co-ops.

“We have demonstrated that a choice is possible even in the difficult contexts where we operate,” Mr. Citarda said.

Laws in Italy allow for the social reuse — although not the sale — of property seized from people convicted of involvement in organized crime. Once properties are confiscated, they can be made available for groups to bid on. Libera Terra — itself part of the anti-Mafia organization Libera — helps groups bid for tenders. After the tender is won, it provides training and guidance on managing co-ops.

Libera Terra’s nine co-ops — which had revenue of about $8.3 million in 2019 — are among hundreds in Italy using confiscated real estate. Other countries are also employing social reuse; for instance, in 2018 the European Union funded a pastry shop run by local people in a confiscated property in Albania. Their aim was to send out a message that what’s stolen from society can and must be given back.

All governments can confiscate the properties of criminal groups, although how they practice this varies. But confiscating properties is rarely an issue; managing them is.

Libera Terra’s model deals with that. It’s a way to reuse confiscated properties to redistribute wealth locally, providing jobs for local people — many of whom had few alternatives to working for the Mafia. Mr. Citarda says it is a highly visible and symbolic form of social justice.

Mr. Citarda’s co-op now has nine members and employs 22 permanent and seasonal staff from the area. It uses only organic and ecologically sustainable farming methods. Its wheat, chickpeas and grapes contributed to a turnover of about $890,000 in 2019.

The co-op members won the tender to use the property, and then had to gain the trust of wary local people for their vision to respect the land, workers and the finished product.

Mr. Citarda says reviving the fallow fields and dilapidated buildings was a major challenge. But he adds, “The aim is to demonstrate the value and importance of social reuse of confiscated assets for the rebirth of entire territories.”

The impact of social reuse — rather than simply confiscation — on the Mafia is hard to quantify. However, crime groups’ suspected attempts to intimidate people running co-ops gives a flavor of their attitude toward them.

Libera has published research into reuse of about 800 confiscated properties throughout Italy, finding they benefited regional development and employment, particularly for young people.

“Asset confiscation in Italy has been the most powerful instrument for the last 30 to 35 years against the Mafia, as profit- and power-oriented organizations. When the profits and proceeds of these criminal groups are hit, it hurts them very much.”

Libera shares knowledge with another anti-Mafia organization, the Alameda Foundation, in Buenos Aires. The foundation helped establish a similar project, a space containing confiscated machinery from illegal textile workshops, called the Barracas Clothing Demonstration Center. People previously trapped in illegal workshops work there in co-ops. The aim is that groups will establish themselves and eventually move to their own premises, making space for others that need the machinery and guidance to start production.

Shirley Ramos, a Bolivian, went to Argentina with a promise of a good job at a workshop, but says, “I found that it was precarious and enslaved.” She worked 16-hour days over one year there. Bosses withheld her passport and threatened to have her deported.

“I didn’t know Argentine laws and I didn’t have technology available to inform myself,” Ms. Ramos says.

Authorities found that the owner was not paying the workers and they closed the workshop. Dozens of the workers came together to form the December 9 Cooperative and were given space at the Barracas center.

Ms. Ramos says it was difficult initially to find equal commitment and responsibilities among the co-op partners. They had to learn from their mistakes. Now they vote for a board of directors, and there is a set of internal regulations that all the partners must comply with.

Ms. Ramos has been working at the co-op making wholesale clothing for several years, under fair conditions. She says the work is a struggle but that the co-op is growing.

“The co-operative is very important for my colleagues and I, due to everything that happened. We’ve established an efficient and productive co-operative, and businessmen no longer exploit us.”

Lucas Manjon, who has headed investigations at the Alameda Foundation, argues that providing employment quickly reduces workers’ vulnerability. Otherwise, he says, “they could again be victims of traffickers and slavers.”

But although social reuse works across borders, how and if it is carried out varies. Romania and Portugal, for example, have laws permitting reuse of confiscated assets, but it’s rarely practiced. And the laws governing situations where property is in one country but criminal owners are from another are inadequate.

The European Union has a framework for confiscating assets and a directive for national laws to promote social reuse. And the U.N. Convention Against Transnational Organized Crime committed countries to adopting practices for extradition and legal co-operation. But they do not oblige action.

In Italy there are problems with timely assignment of property to groups. Mr. Citarda says La Placido Rizzotto is still waiting for some land to change from “seized” to “confiscated” status so that they can work it. Delays cause land to lies uncultivated and properties to deteriorate. And Italy’s successful confiscation efforts mean it currently controls about 16,400 properties. Ms. Riccardi says assigning them all for social reuse is impossible. “Every asset has its own story,” Ms. Riccardi says. “You need to go there, do due diligence, verify its condition, identify the owners. It is not easy at all. A really time-consuming activity.”

Elsewhere, governments auction off properties, such as in Scotland. Italian laws prohibit that, potentially safeguarding against further misuse. Yet, Ms. Riccardi believes a cost-benefit analysis on most properties would best decide whether to sell it or assign it for social reuse.

But Luigi Ciotti, Libera’s founder, wants social reuse of confiscated assets to be mandatory, at least, throughout Europe.

“It’s proven that this tool is very harmful to the Mafia,” he says. “It destroys its patrimony — not only economically, but politically, culturally and socially.”

Rhodri Davies is a freelance journalist who covers rights and inequality in Europe, Latin America and the Middle East.

The Times is committed to publishing a diversity of letters to the editor. We’d like to hear what you think about this or any of our articles. Here are some tips. And here’s our email: letters@nytimes.com.

A Clash of Wills Keeps a Leonardo Masterpiece Hidden

Officer Near Minneapolis Kills Motorist, and a Crowd Confronts the Police

Hideki Matsuyama Wins the Masters With a Groundbreaking Performance

10 Weeks to the Finish Line: The N.Y.C. Mayor’s Race Heats Up