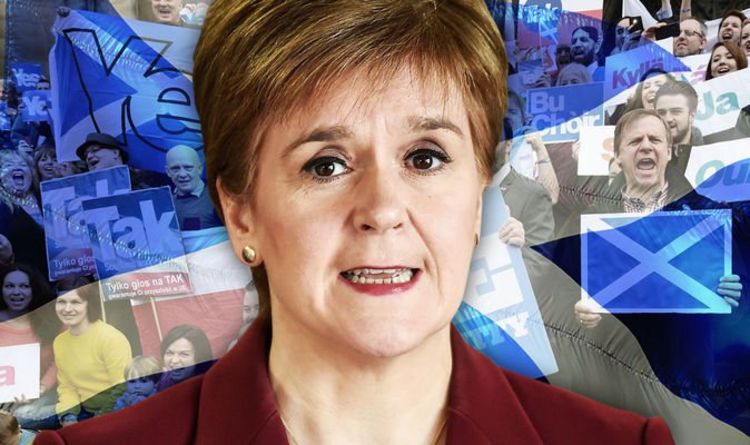 Nicola Sturgeon vowed last month that Scotland will hold a second vote on independence if the SNP win May’s Scottish elections. The party is miles ahead in the polls, meaning demands for IndyRef2 will no doubt intensify in the second half of 2020. Over 20 consecutive polls have put a Yes vote ahead in recent months. Ms Sturgeon said in January: “I want to have a legal referendum, that’s what I’m going to seek the authority of the Scottish people for in May and if they give me that authority that’s what I intend to do: to have a legal referendum to give people the right to choose.

“That’s democracy. It’s not about what I want or what Boris Johnson wants.”

However, Ms Sturgeon is still facing scrutiny over the economic side of Scottish independence, and a damning report released earlier this month only sparked more doubt.

According to an analysis of trade by the London School of Economics (LSE), Scotland would be “considerably poorer” from a trading perspective as an independent country.

Co-author of the report, Hanwei Huang, said: “This analysis shows that, at least from a trade perspective, independence would leave Scotland considerably poorer than staying in the United Kingdom.”

The report added that independence would be a bigger hit to Scotland than Brexit was to the UK, and leaving both unions would cause an equivalent income loss of between £2,000 and £2,800 per person.

The stark impact is due to Scotland’s trading ties with the UK, as the UK accounts for more than 60 percent of Scotland’s imports and exports.

Co-author Thomas Sampson added: “We find that the costs of independence to the Scottish economy are likely to be two to three times greater than the costs of Brexit.

“Moreover, rejoining the EU following independence would do little to mitigate these costs.”

She said: “The study is also clear that it takes no account of any changes in migration policy, inward investment or any economic levers the Scottish government would have control of in an independent Scotland to do things better and boost the economy.

“It is still too early to calculate the long-term damage that Brexit will do to Scotland’s economy, but the disruption it is already causing is deeply concerning.”

An LSE report in January found that 86 percent of European and US economists believe that the UK economy is likely to be at least several percentage points smaller in 2030 than it would otherwise have been as a result of Brexit.

Only a quarter of respondents believe the same applies to the EU-27 economy, while 41 percent don’t consider that the impact on the EU will be strongly negative.

Belgian MEP Philippe Lamberts told Express.co.uk that he believes being in the EU will mean “Scotland can be better off” than England as the Conservative Government has not respected Edinburgh.

Mr Lamberts added: “The decision won’t just be economic, Brexit was not just about the economy, it was also about England being an independent nation that could do what it wants.

“This would be likewise for Scotland leaving the UK, a political choice worth doing because of the assumption Scotland can be better off as part of the EU and can therefore benefit both economically and politically.

“When you see the way the Tory party disregards the judiciary, wants to get out of the European convention on human rights, these are all arguments that can convince Scottish citizens to protect their basic freedoms.

“You can also see many Scots don’t feel respected by the UK Government.”