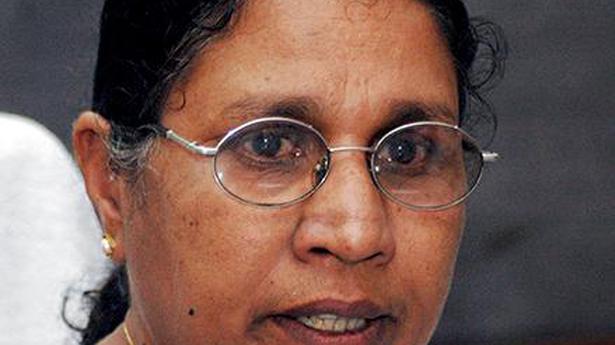 Ms. Josephine has been in the eye of a storm after a caller came out against her alleging she scolded him for enquiring about a complaint filed by his elderly relative in Pathanamthitta.

In the statement on Sunday, Ms. Josephine said the complaint of the elderly woman, Lakshmikutty Amma, was registered on March 10, 2020, and notice had been issued for hearing the complaint at an adalat at the Parakode block panchayat hall in Pathanamthitta district on Thursday next (January 28).

Her son Narayana Pillai’s complaint was registered on February 6, 2020, and notice issued for attending an adalat on December 18, 2020. However, neither Ms. Lakshmikutty Amma nor Mr. Pillai appeared for the adalat, or inform the commission in writing or over phone about their inability to attend.

While the commission accepted complaints only from women, Mr. Pillai’s complaint was considered taking into account the seriousness of the issue and Ms. Lakshmikutty Amma’s age, and a petition was registered. Adalats, though, were postponed owing to the outbreak of COVID-19.

Moreover, the Perumpetty police in Pathanamthitta had registered a case under sections of the Indian Penal Code on Mr. Pillai’s complaint. It was learnt that the accused was out on bail. The commission could not take a decision on a case that was under the purview of the court. Even so, the commission was looking into the complaint.

Lack of clarity in the call made to her led to the assumption that it pertained to a fresh complaint and Ms. Josephone’s consequent response, the statement said. The intention was to enquire from the caller if the issue had been brought to the notice of vigilance committees functioning under the commission in every ward of local self-government institutions or that of people’s representatives, including the local MLA.

The statement underlined that the commission was a quasi-judicial body that did not have the powers to register an FIR on receiving a complaint or hand out punishments. After registering complaints, it heard both the complainant and the opposite party before taking an appropriate decision. Wherever police reports were needed, action was initiated on their basis. It also provided counselling and shelter in emergency cases. The commission had disposed of nearly 15,000 such complaints in the past four to five years.