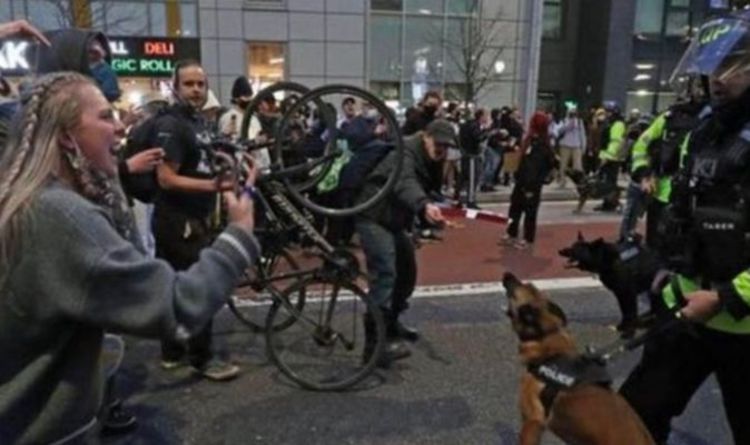 Around 130 protestors are currently on College Green, near the city centre, police said. This is the same location where Sunday night’s protest began before it turned violent.

The demonstrations are opposing the Police and Crime Bill – which would give police powers to curtail protests.

All Black Lives Bris, who call themselves the Bristol branch of All Black Lives UK, shared a post calling for another demonstration on Instagram earlier today, according to Bristol Live.

This has since been taken down but remains on their Instagram story.

A spokesperson for Avon and Somerset Constabulary told Bristol Live: “Police are aware of details being shared on social media relating to a protest this afternoon in Bristol.

“While we remain committed to facilitating protest when it’s lawful and safe to do so, we’d remind anyone planning to attend that we remain in a pandemic. We’d ask you to make your voices heard through online protest.

“Gatherings of people risk increasing the spread of Coronavirus and putting our NHS under yet greater pressure after we’ve all sacrificed so much to bring the rate of infection down.

“On the day that we remember all those who have lost their lives to COVID in the last year, we ask everyone to stay at home.”

News of a second protest quickly swept across social media.

And with news that another could be taking place, the response was equally scathing.

“This protest is about traveller’s rights, the usual suspects are there.”

Another joked: “Another day, another protest in Bristol.”

Lockdown change TODAY: What can I do from April 12?