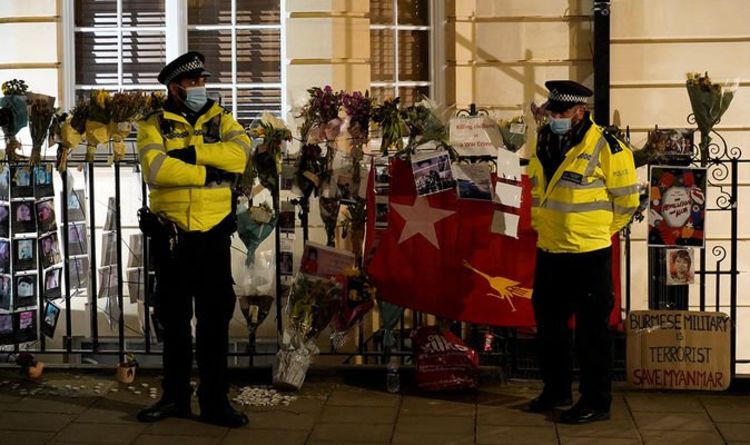 Kyaw Zwar Minn told Reuters “I have been locked out” after opposing the new regime. Hundreds have been shot dead by security forces since the army seized power on February 1 overthrowing the civilian government in Myanmar.

Speaking to the Daily Telegraph Mr Minn claimed he’d been “betrayed” by other embassy employees.

He added: “When I left the embassy, they stormed inside the embassy and took it. They are from the Myanmar military.

“This a coup. This is the UK, we are not in Myanmar, in Burma. They are not able to do this.

“The British Government won’t allow this one, you’ll see that.

“This is London you know. They can’t be able to do this coup in the middle of London.”

Speaking to the Daily Telegraph, Government insiders suggested allies of the new military regime in Myanmar now control the embassy.

However, they added events are ongoing and the exact situation is uncertain.

In response, the new regime in Myanmar announced he had been recalled.

The Myanmar army claimed the coup was a response to election rigging but this has been rejected by independent election observers.

A protest against the coup took place outside Myanmar’s London embassy on Wednesday evening.

Police were on the scene but made no arrests.

On Wednesday another 15 people were shot dead in Myanmar protesting against the coup according to local activists.

Many others were injured after security forces used live ammunition against protesters.

According to the Assistance Association of Political Prisoners (AAPP) at least 581 civilians have been killed by the new junta since the coup.

These included nearly 50 children with reports of widespread torture and extra-judicial killing.

There are reports the opposition backing villages in the southern Karen state have been targeted with air strikes.

Naomi Osaka vs Jennifer Brady – info and latest from Aussie...