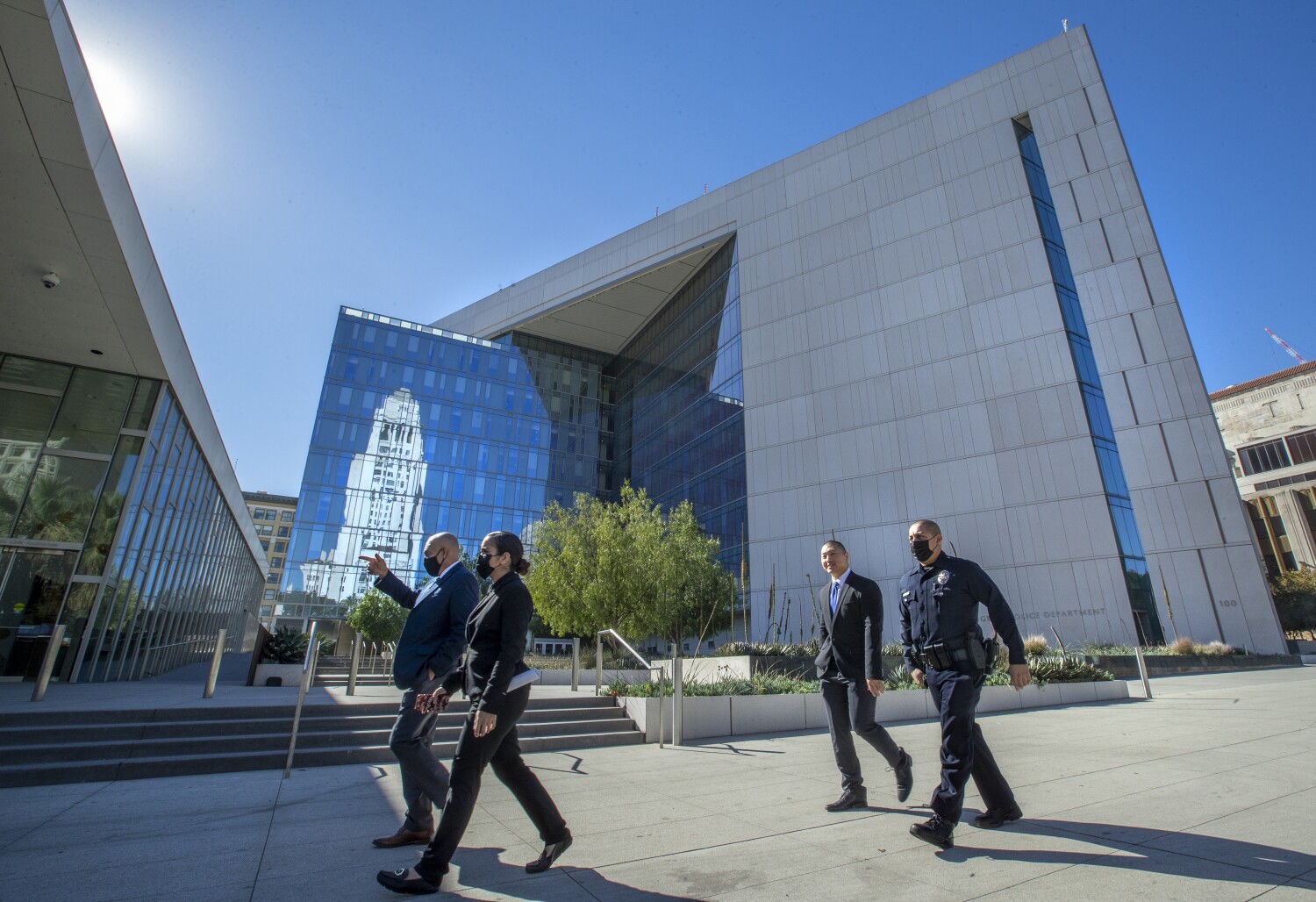 The shootings more than doubled the number of incidents in which LAPD officers have opened fire this year, to nine, and raised concerns about the trajectory of deadly police force after two years in a row in which police shootings hit 30-year lows.

During a Police Commission meeting Tuesday, LAPD Chief Michel Moore called the cluster “striking” but said the incidents were not related and that each shooting would be investigated and assessed individually, including for any potential wrongdoing or policy violations by officers.

“Each of these instances will be judged individually on their own merit,” Moore said.

Activists denounced the shootings as further evidence of police officers perpetrating violence in Black and brown communities, and repeated their demands for the department to be defunded so that resources could be spent on social services for homeless residents and those who suffer from mental illness and addiction.

The shootings came during a violent week in L.A., when 28 people were shot — compared with 17 the week prior. Many of the incidents involved gun violence aimed at groups of people gathered outside, Moore said.

Two of the five police shootings occurred on March 16.

The first occurred about 4:40 p.m., after patrol officers responded to reports of an assault with a deadly weapon in the 1000 block of West 21st Street in the Southwest Division, police said. There, the suspect — a 36-year-old man — was surrounded in a home, and the SWAT team and a crisis negotiation team responded, police said.

“The effort was to have him surrender and come outside,” Moore said Tuesday, with police playing recorded messages from the man’s family members asking him to surrender.

Instead, the man exited the home and exchanged gunfire with police, Moore said. The man was shot and pronounced dead at the scene. A SWAT team member was shot in the chest and face and transported to a local hospital. The officer has since returned home and is expected to recover from his injuries, Moore said.

Moore said police recovered a shotgun and a pistol from the scene.

About 5:20 p.m., patrol and Community Safety Partnership officers in the Southeast Division responded to another call for an assault with a deadly weapon and entered a home where they were told that a man was trying to attack another person with a knife, Moore said.

After entering the home, the officers saw a 33-year-old man holding two knives in a hallway, trying to break through the closed door of a bedroom where a victim was located, Moore said.

Moore said the man initially dropped the knives in response to police commands that he do so, but then moved back toward the knives. Officers shot him in the leg with a 40-millimeter projectile, and he “fell to the ground on top of the knives,” Moore said.

Moore alleged that the man then “rearmed himself with the knife and lunged toward” the bedroom door once more, forcing it open. The officers reported seeing the man “slashing” at someone in the bedroom and opened fire, striking the man, Moore said.

The man was taken to a local hospital, underwent surgery and is expected to survive, Moore said. The victim in the bedroom sustained lacerations to the head and finger, Moore said.

About 12:15 p.m. the next day, an off-duty LAPD lieutenant was sitting in his private vehicle in the 3100 block of Pueblo Avenue in the Hollenbeck Division when he said he witnessed a drive-by shooting of a man standing on a sidewalk, Moore said.

The lieutenant exited his vehicle, and as the suspect vehicle drove past him opened fire on it, believing that the passenger who had just shot the man on the sidewalk was turning in his direction, Moore said.

Police do not believe that anyone in the vehicle was hit by the lieutenant’s gunfire. The lieutenant also was not injured. The victim who was shot on the street, who suffered multiple gunshot wounds, was taken to an area hospital and is expected to survive, Moore said.

About 3:40 p.m., police said a sergeant in the Rampart Division was flagged down by a community member who alleged that a man with a hammer and another weapon that resembled a hatchet was walking in the area.

Moore said the sergeant called in backup and formulated a plan to confront the man with other officers. When the officers approached the man in the 600 block of South Bonnie Brae Street, he allegedly ignored their requests that he drop the hammer and the second item, Moore said.

Moore said the man threw the hammer at the officers, and then raised the second item above his head as if to throw it as well when he was shot once by the officers. He was later pronounced dead.

No officers were injured. Moore said a metal handle and “a black piece of metal resembling an ice ax” were recovered from the scene. The department had previously described the recovered items as a hammer and a “metal claw-like device” used for rock climbing.

About 7 p.m. that evening, officers in the Hollenbeck area who had conducted a traffic stop began a pursuit of the driver after he allegedly backed up into their cruiser and sped off, Moore said. The pursuit ended when the driver crashed into a home.

Moore alleged the driver got out of the vehicle holding a handgun and was then shot by police. The 24-year-old man was transported to a local hospital and was expected to survive, Moore said.

Moore said a gun was recovered at the scene.

Moore noted that the five incidents more than doubled the number of police shootings this year, and said each would be carefully reviewed by several panels — including the use of force review board and the Police Commission. In addition to determining whether the officers were justified in shooting, they will be assessed on the tactics they used in advance of the shootings — including whether they tried appropriately to deescalate the situations. Body-worn camera footage and any other recovered video of the incidents will also be released within 45 days, he said.

“Reverence for human life remains our guiding principle,” he said.

Commissioner Dale Bonner asked Moore whether the department could provide the commission with an interim report on the trajectory of police shootings so far this year, and Moore said he would make sure that an assessment of 2021 incidents to date is provided alongside with the formal report on shootings and other police uses of force that is still due to the commission for the 2020 calendar year.

There were 27 police shootings last year, compared with 26 in 2019. Those figures marked decades-long lows for a department that used to see far more shootings per year.

Crowds gather ahead of white supremacy rally in Huntington Beach

As protesters on left and right target public servants at home, one city pushes back

Column: No shoes, no shot, no service. Why vaccine ‘passports’ are a good idea

Trump, down for a week with coronavirus, returns to rallying with...