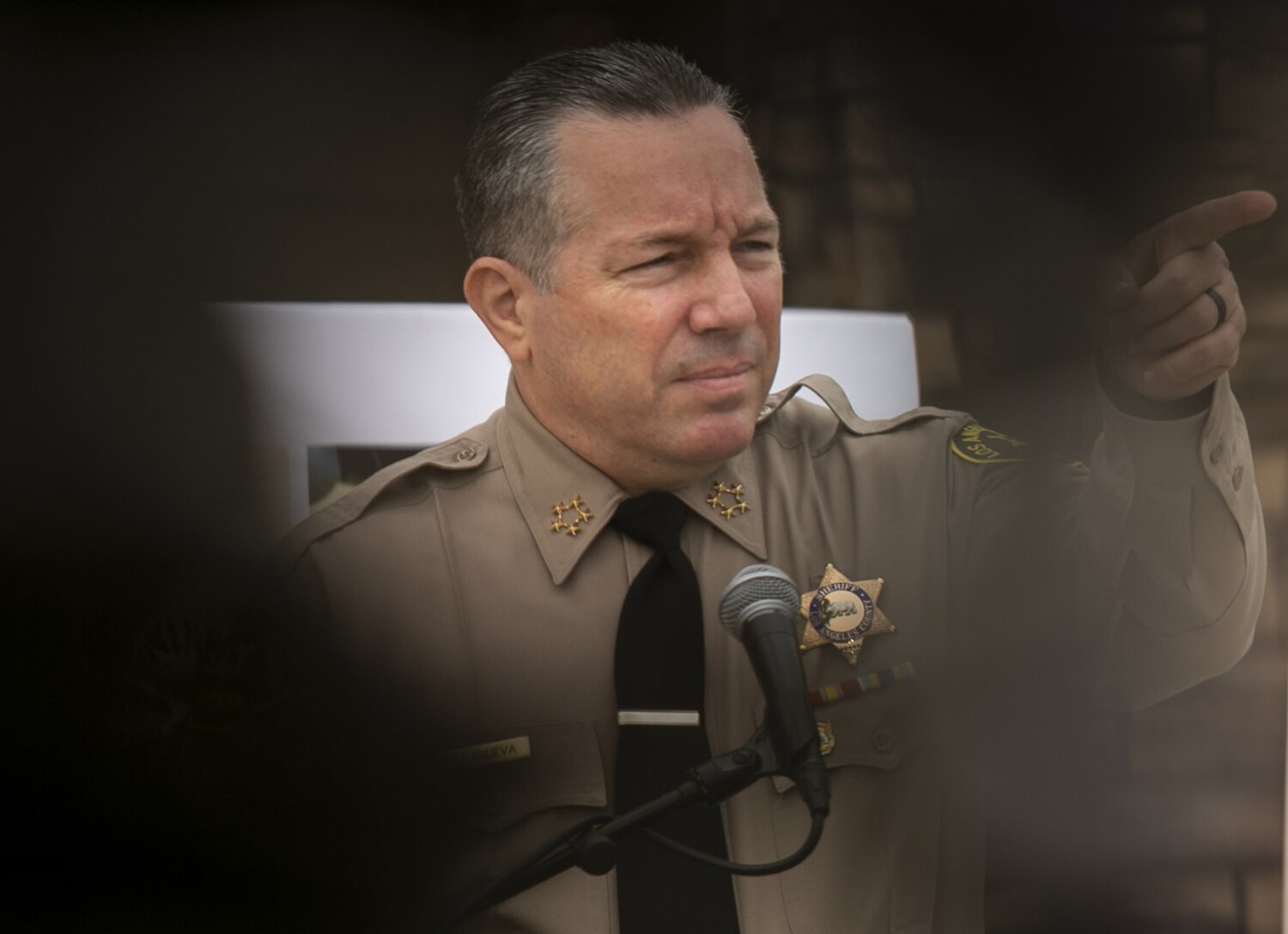 L.A. County Sheriff Alex Villanueva is challenging a subpoena to answer questions about secretive, gang-like cliques of deputies in the department, arguing in a court filing that the request is “too broad” and “harassing.”

Max Huntsman, the agency’s independent watchdog, issued the subpoena last month after Villanueva made comments that Hunstman found to be “somewhat unclear” about efforts to root out the cliques and enforce a new policy banning any deputy groups that violate people’s rights. The groups, which have monikers like the Banditos and the Executioners, have been accused of using violent and aggressive policing tactics and celebrating deputy shootings.

“We want to clarify his answers and ask about his directions to staff on the subject,” Huntsman said in an interview.

The subpoena calls for Villanueva to be questioned privately by Huntsman over video on Thursday. It is unclear whether Huntsman planned to place Villanueva under oath for the proceeding.

In the court papers filed Monday, Villanueva’s attorney asked a judge to toss out the subpoena and order a stop to the interview.

“The Inspector General has not attempted to use less intrusive methods or sources for the information he seeks. He has rejected the Sheriff’s offer to provide detailed answers,” attorney Linda Savitt wrote, adding that the interview would give the inspector general an opportunity to try to embarrass the sheriff.

Villanueva did not respond to a request for comment. Savitt told The Times that barring a ruling from the judge, the sheriff will not attend Thursday’s proceedings. It would not be a good use of Villanueva’s time, she said.

“The sheriff is a very busy man, he has lots of responsibilities. We’re dealing with the pandemic, we’re dealing with an uptick in crime, I think last week he went to three funerals,” Savitt said.

Villanueva has resisted a subpoena before. When the commission last year requested Villanueva’s testimony about his agency’s handling of the coronavirus pandemic inside its sprawling jail system, his attorney argued that the request was an abuse of power and that Villanueva had met his obligation by sending an assistant sheriff who was knowledgeable about the issue to the meeting.

A Superior Court judge ruled that the panel was within its power when it issued the subpoena and set a hearing calling on Villanueva’s lawyers to explain why the sheriff should not be held in contempt of court for his refusal to appear.

Lawyers representing L.A. County dropped the case against Villanueva after he showed up voluntarily to the commission’s December meeting, when he took questions from the panel about deputy subgroups. He appeared again the next month to discuss the pandemic in the jails.

The L.A. County Board of Supervisors last year gave the Sheriff Civilian Oversight Commission the authority to compel internal records and testimony from the department. A few months later, voters affirmed the move, and Gov. Gavin Newsom followed by signing a state law that gives subpoena power to police oversight panels statewide.

At the commission’s December meeting, Villanueva said that no deputy had been disciplined for joining a clique since his ban on deputies joining abusive groups went into effect early in the year. He also suggested that simply being associated with a clique does not violate any department rules.

“It has to be linked to misconduct,” Villanueva said. “Let’s say a fictitious group, you know, they decide to get a tattoo of a Tweety Bird on their shoulder, and they’re the Tweety Birds. … Just that in of itself, we cannot take action on it, because it has to be tied to some type of misconduct that harms somebody. The grouping of itself, it is not going to pass constitutional muster under 1st Amendment grounds.”

A report by the Center for Juvenile Law and Policy at Loyola Law School found that since the 1970s there have been 18 deputy cliques within the Sheriff’s Department, some of which remain active. Recently, the agency has been roiled by allegations that groups of deputies with matching tattoos have run roughshod over the East L.A. and Compton sheriff’s stations.

Records show that L.A. County has been on the hook for at least $55 million in payouts in cases in which sheriff’s deputies were alleged to belong to a secret society. The cases involve incidents that date to 1990.

COVID-19 pandemic: Allow people over 25 to get inoculated, Uddhav Thackeray...

Biden Wants Harris to Have a Major Role. What It Is...