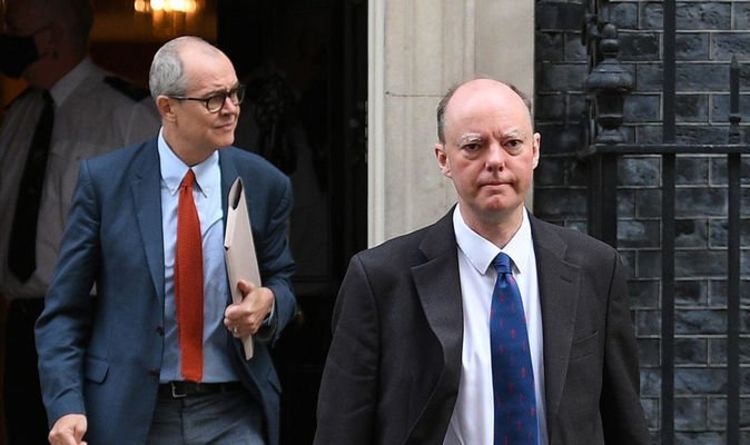 Prime Minister Boris Johnson has received widespread criticism for his handling of the coronavirus pandemic as the UK’s death toll now stands at 127,000. The vaccine rollout is giving the British public hope that lockdowns will soon be a thing of the past, but Professor Chris Whitty has tried to warn against complacency recently. The Chief Medical Officer for England did say last week that it is “unlikely” that the UK will require another round of draconian measures to stop the spread of the virus. However, he added that the UK will need to learn to live with coronavirus as it is “not going to go away”.

Professor Whitty has played a vital role in helping the Government manage the pandemic, along with his colleague Sir Patrick Vallance – England’s Chief Scientific Adviser.

However, they clashed earlier in the health crisis as Sir Patrick claimed Professor Whitty gave him a “telling off.”

The incident came in March 2020, as the Government’s strategy came under intense scrutiny due to rising cases of COVID-19.

As highlighted in “Failure of State” by Jonathan Calvert and George Arbuthnott, it appeared Vallance was lobbying for a lockdown to be enforced.

In an email uncovered by a BBC Freedom of Information request, Sir Patrick said that in behind-closed-doors discussions within government in March he “argued stronger than anyone for action on lockdown”.

But he said he was rebuked by Professor Whitty, Department of Health permanent secretary Sir Chris World and the Government’s top civil servant, the then cabinet secretary Sir Mark Sedwill.

In fact, he said he even received a “telling off” for raising his concerns.

The email exchange appeared to be part of a discussion with other scientific advisers of a Sunday Times article in May criticising delays in imposing lockdown.

In an email dated May 23, Vallance said: “It is … the case that I argued stronger than anyone for action for lockdown (with a telling off from CMO, PS DHSC and CabSec).”

A spokesman for Boris Johnson maintained six months later that they were “very clear at the time that the steps we were taking were guided by scientific and medical advice.”

The Government eventually heeded the warnings of Sir Patrick, closing hospitality venues on March 20 before a full lockdown on March 23.

In other extracts from “Failures of State”, it is revealed that Professor Whitty and Sir Patrick Vallance were placed on “resignation watch.”

The claims surrounded debate around lockdown in June last year, when “the cracks had been appearing between the scientists and politicians”.

Professor Whitty and his colleague Sir Patrick Vallance appeared to be concerned, as on June 14 last year reports suggested concerns were mounting that the advisers would walk.

A SAGE scientist was quoted as saying at the time: “We have had enough of being treated as human shields by the Prime Minister.”

Clashes in Number 10 and the Government would once again occur in January as the UK recorded a record 1,820 deaths in one day.

Reports suggested tempers flared at the heart of Westminster as SAGE advisers fumed at the Government, and specifically, Chancellor Sunak.

One SAGE source said: “I thought the Chancellor was in charge. He was the main person who was responsible for the second wave.”

Failure of State: The Inside Story of Britain’s Battle with Coronavirus, by Jonathan Calvert and George Arbuthnott, was published by Mudlark in March. It is available here.